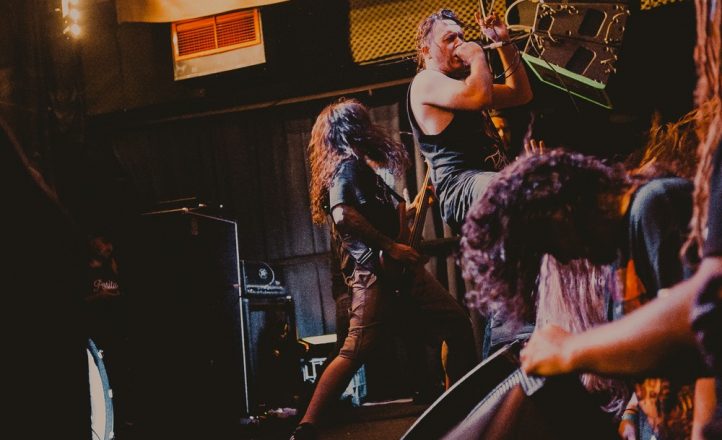 Sunday night is always a hard night to draw a crowd,  but the venue although small feels well suited as it is dark and with working aircon, something, dear reader, that is necessary in Brisbane during February.

Opening the evenings brutal course local heavy lads Amicable Treason do their best to get the small number of people in the venue going, even trying a wall of death with about 30 people in the pit. Their brand of death/thrash is brilliant when the guitarists are let off the hook playing some decent solos but these are let down by the big deathcore-like breakdowns that the band also insist on interspersing through their music.

Short turnarounds between sets mean that fellow Brisbanites Eternal Rest take the stage within 15 minutes of the openers leaving the stage. Sadly this doesn’t bode well for their sound, the vocals are buried so deep that when vocalist Shanon Davern goes about a little stage banter the rapidly filling venue cannot hear what is being said. Music like this needs the vocals as another instrument and that is lacking here unfortunately.

Psycroptic need no introduction around here, nor does the brand of breathtaking tech death that they pedal. Material covering the span of their career but leaning heavily on the last two most popular release pepper the 40 minute set. The vocal sound issues that plagued the previous band are no where to be seen as vocalist Jason Peppiatt throws himself around the small stage with great energy, only stopping to thank the now hearty crowd for coming out on a Sunday night to catch some quality death metal. As always, entertaining and fucking brutal.

After the recent loss of their bassist, Psycroptic bassist Cameron Grant steps back onto the stage with Cattle Decapitation after a rather short break. The house light go dim as the tape intro rolls for the bands first track, the slow build up to ‘The Carbon Stampede’ is worth it as soon as the band’s death/grind takes off at full pace. Sadly the vocal mix issues from earlier in the night make a brief appearance during the opening couple of tracks, particularly the spoken word intro of ‘The Prophets of Loss’. But these are cleared up relatively quickly and due to the quality of the band’s output it is barely noticed.

Travis Ryan has to be one of the more experimental vocalists in the genre with growls, screams and some croaky clean singing throughout their recorded output. This was what I was personally most intrigued to see recreated live. I have seen vocalists struggle with this in the past and recreated it was, word for word and phrase for phrase without struggle the switch from clean to absolute death rumble pulled off so seemingly easily just added to the spectacle.

The band hold their own with the abrasive nature of their music that even with a stand in, they’re as close to note perfect as it will get in the live environment and the baying crowd lap up every riff and blast beat. Towards the end of a set that leans heavily on the last two releases Ryan apologies for the band taking five years to tour again and assures us that it won’t take as long to come back, looking as though he has thoroughly enjoyed his time entertaining the close to sold out venue. They leave stage after ploughing through ‘Forced Gender Reassignment’ before coming back out and bludgeoning the ravaging crowd one last time with the brilliant ‘Pacific Grim’, a personal fave, before bowing out disgracefully with ‘Your Disposal’.