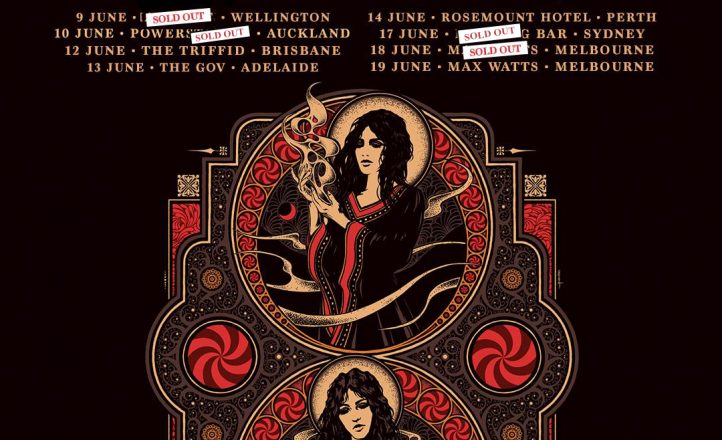 Chelsea Wolfe has been breaking new ground in alternative music since her 2010 debut The Grime and The Glow – an innovative record which married folk and avant-garde music together with Gothic rock. Since the release of 2015’s Abyss and its follow up Hiss Spun, Chelsea has been dipping her toes into the creative pool that is doom Mmtal.

Although returning to a more folk oriented sound with her 2019 effort The Birth of Violence, she is far from done stretching her metal muscles, having released Bloodmoon just at the end of last year, the first of many promised collaborations with metalcore titans Converge. I think it should be said that Chelsea Wolfe is probably my favourite artist of recent years.

Her frequent collaborator, Emma Ruth Rundle, may not be as well known, but is everywhere bit as accomplished and celebrated. Originally the front woman of short lived indie band The Nocturnes, Rundle became the guitarist for the instrumental band Red Sparowes, a position she still holds to this day. The former vocalist for post-metal band Marriages, Rundle recorded one EP and a full length album with the group.

Having released five brilliant solo albums, including last years hauntingly magnificent Engine of Hell, a personal piece about her journey through drug addiction, Rundle has also dabbled in doom metal, collaborating with American death/doom innovators Thou on May Our Chambers Be Full, its companion EP The Helm of Sorrow and the recent single Night.

Both women have proven to be incredibly influential in the recently emerging scene of similarly minded artists from across the globe, including England’s Darkher, America’s Frayle, Israel’s Zeresh and Australia’s own Suldusk. So, it goes without saying that a tour by both of them was highly anticipated – especially considering the unfortunate business which led to Chelsea’s last tour being cancelled.

The first thing that I noticed was the diversity of the crowd. Lots of different people from different places and varying musical backgrounds. Not just the Newtown Goths and extreme metal crowd I expected to see there: there were multiple gentlemen there who would have been in their 60s or 70s at least.

It has been 2012 since Chelsea Wolfe last came to Australia, which I’m embarrassed to admit is before I began listening to her. While everybody was definitely there to see Chelsea, the general consensus was that they were excited to see Emma Ruth Rundle too.

To my knowledge, this is Emma’s first time touring Australia at all – and things sure could have been smoother. Although it didn’t at all show in their performances, my bet was this was one of those tours where everyone involved woke up in the morning wondering “What’s going to go wrong today?”

Emma Ruth Rundle was sick for the first leg of the tour, including all New Zealand dates, Adelaide and Brisbane. Thankfully, she was able to pull through in time for the Sydney show. But that doesn’t mean the night wasn’t without a few snags that required quick improvisation from Chelsea and her crew to overcome.

The result was a night which seemed to have the impromptu theme of intimacy. Not just in the lyrical content, which is intimate and close to the artists’ hearts, but also to the performances themselves. Emma Ruth Rundle, clearly fatigued by whatever had ailed her, sat casually on one side of the stage with an acoustic guitar and a keyboard.

When the lights dimmed, Emma politely apologized for feeling under the weather and promised to power through it – commenting that she found it ironic to be “performing music from a broken place, in a broken state.” The first thing that impressed me about her, was that when she began her set, she made sure that the sound crew turned her keyboard up – which is something I always appreciate from an artist when the mix isn’t right.

Emma played songs from her acoustic effort Engine of Hell in order, and ended her set with a beautiful rendition of Marked for Death. One couldn’t tell that she was under the weather from listening to her. During her performance, Emma was charming, funny and very personable – Speaking to members of the audience and having a very understated but welcoming stage presence.

The atmosphere of the whole night felt like a more casual affair, the kind of show you might see with dinner down at the local. It was certainly to her favour and credit, as I found it a very memorable performance. Her music may have been written in a dark emotional state, but she seems to be at her happiest when performing it. The bright smile on her face was a noticeable contrast to the confronting content of her lyrics.

When it came time for Chelsea’s set, I can’t help but think that many were left perhaps just a little disappointed – though it was through no fault of her own. After appearing onstage by herself, with nobody accompanying her except her two guitars, Chelsea opened with an acoustic rendition of Be All Things – her eerie vocals somehow more ethereal in person than they could possibly be on the record.

Chelsea has the same kind of presence that I had always expected from her. Quiet, humble and reserved. She politely explained that a member of her band was sick (bassist, Ben Chisholm). To ensure the show could go on, they decided to put together a solo set list at the last minute.

The show comprised mostly of older songs, and a cover of Roky Erikson’s Night of The Vampire that was so hauntingly beautiful you’d be forgiven for confusing it for an original. She closed the set off with four songs from her 2012 acoustic album Unknown Room” – in my opinion,  one of her best releases – before ending the night on another cover.
She performed her recently released single Oui Oui Mari”, a dark, haunting cover of an 1919 Fred Fisher song that was commissioned for the horror film X – which she also scored with John Wick composer Tyler Bates.

Chelsea introduced the track and talked about how she felt being asked to record it. It really is a beautiful rendition and I was excited to hear her play it – even if she seemed more unfamiliar with it than she did with the rest of her set.

Ultimately, the night was probably filled with mixed emotions from a lot of people. One one hand, we were privileged to see the indisputable Queen of Goth in such a close, intimate and unique setting – on the other, it’s disappointing we couldn’t experience her full band and her darker, heavier tracks that many of us in Australia have been waiting to hear since 2017.

But Chelsea Wolfe herself was nothing short of amazing, and the dedication, passion and care that it takes to deliver what we got, against conspiring forces, has to be not only acknowledged, but also celebrated. We can only hope that she makes her way back down here soon – possibly with Converge, but that might be too hopeful.