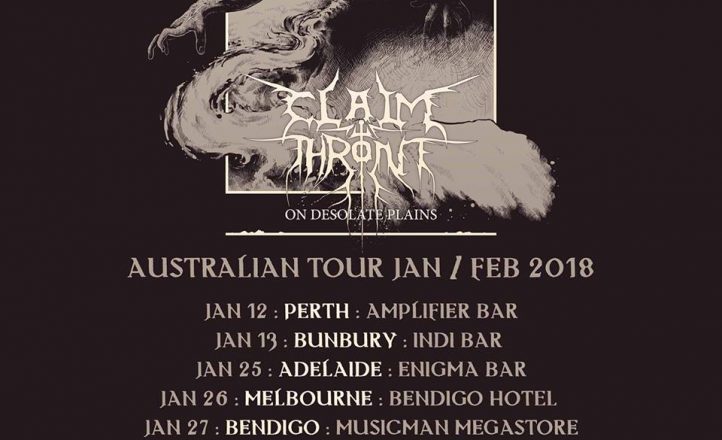 Sydney’s favourite underground rock n roll bar was invaded by darker forces this evening when Claim the Throne and their loyal henchmen came in to town.

Sunday is never the greatest night for a local gig in Sydney but at Frankie’s it’s always a party night. Still, the room was fairly empty when Sarcophaguts took an axe to the place. Their singer used the area in front of the stage to his advantage, prowling back and forth while the band tore out some speedy and technical death metal behind him. I’ve not seen this unit before but they had the chops and enough charisma out front for me to be interested should our paths cross again.

Flaming Wrekage hit the stage next and it was clear they had brought a few fans along with them, forming a cordon at the front as the band unleashed a set of dark and heavy thrash. Live, this band’s Testament-style metal attack is all the more lethal, brutal and tight with a thick bass sound. ‘Thrown to the Wolves’ was a stand out from an all-round solid showing.

I have had the pleasure of catching Black Rheno live a few times now, but they’ve never been as unhinged as tonight. Onstage, the band cut loose with their violent and groovy hardcore-laced sludge as their singer went mental. Mila was totally off the hook, snatching a guy’s phone and running off with it, climbing onto the furniture and even onto members of staff as he charged around the place bellowing for the entire set, drenched in sweat. They kept it together the whole time, slamming out slab after slab with barely a pause for breath.

When the curtain opened for the final time, it revealed a slightly depleted Claim the Throne, appearing without keys player Jesse Millea and with Ray from Bane of Isildur standing in for Jim Parker. At first, the band seemed a little unsettled with the impromptu line-up but after some strangely self-conscious banter from Cabba early on they kicked into a blistering death metal onslaught that covered most of their career. Maybe it was the volume or the intensity of their material but their sound lacked the clarity of the bands that preceded them and while they warmed up well after a faltering start, they had the disadvantage of having to come on after Black Rheno had wiped the floor. Nevertheless, the Perth band’s resounding battle metal got plenty of action happening around the front of the stage and topped off a pretty entertaining night of quality home-bred metal madness.