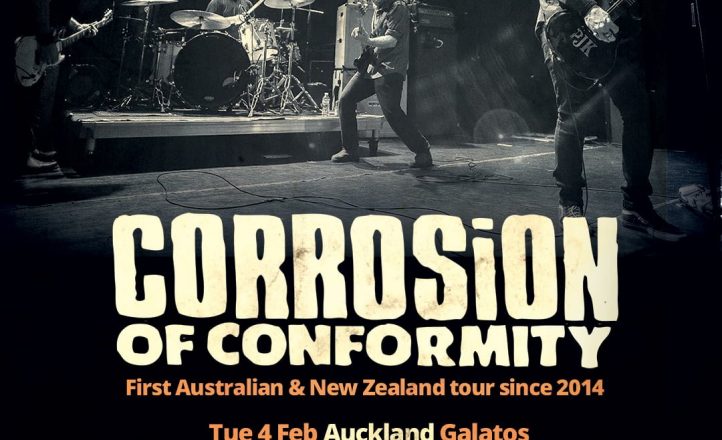 Tonight’s show is sold out and that is noticeable from the minute the doors open as we all pile in out of the drizzle and quickly flood the smaller, more intimate space than originally advertised.  First band up The Royal Artillery have been making noise around Brisbane for what feels like a long time with vocalist/guitarist Zed now ably backed up by the two piece band Chassm. The three lock in tight, playing a brand of groove driven bluesy rock that has most people playing complete attention to them for the duration of their short set.

Death By Carrot are a band name this intrepid reviewer didn’t recognise, but secretly hoped had a great schtick like being a band full of redheads, or come out dressed like the vegetable.  Sadly for me that was a missed opportunity as the band were just as normal as every other rocker and not a red hair was seen amongst the band. Musically they were good, but the longer plodding parts of their music had people going to the bar rather than giving the band their full attention.  The last song must have been their best known as it had a lot of the older crowd singing along.  My apologies to the band for my ignorance though; I will be sure to try and catch some recorded output on a streaming service.

As our headliners walked out onto the stage the pit lurched forward in anticipation and then chaos was unleashed as they launched into Seven Days from Deliverance, setting the scene for the first half of the set. COC play a lot from this album, not in sequence, more peppered with a couple of deeper hits such as Paranoid Opioid along with new track Wolf Named Crow.  The acknowledgment of the recent passing of drummer Reed Mullin hits hard on band and crowd together, and their pain put us at ease, dedicating Thirteen Angels to his memory.

Corrosion of Conformity put on a rocking great show as always, but the majority was from albums all released 20 years ago. With Pepper Keenan back in the band, they are going to concentrate to that material, but the last album and In The Arms Of God before it have some bloody great material that feels as though it was skirted over for whatever reason.  It was great seeing them perform again, but this particular reviewer was left wanting a little more from more recent material, perhaps because it has never really been given the run it deserves.  If ever this band are in your neck of the woods, though, don’t sleep on them.  As Pepper so poignantly said, “Life is too short to fuck around”.