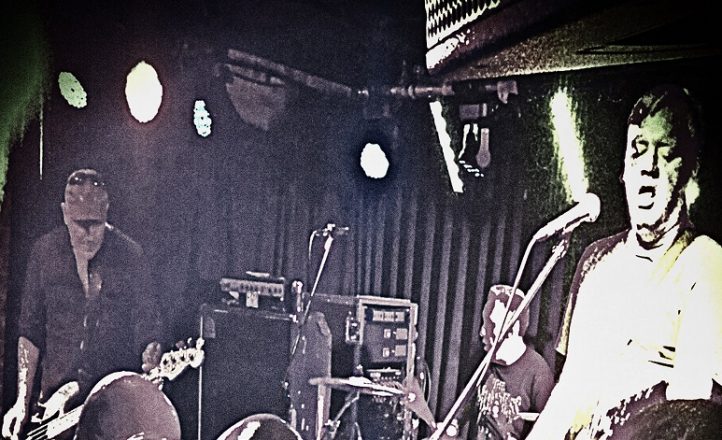 “I’m thinking to myself…I’m a fuckin’ farmer.” So says Ross Knight in the documentary trailer of Cosmic Psychos: Blokes You Can Trust, in reference to the unlikely international fame found by the irreverent and unmistakably ocker punk trio from the mid 80s onwards. Remaining the sole original member of the band originally founded as Spring Plains over 30 years ago, ‘Knighty’ still leads a double life as a punk frontman and farmer, from the rural comfort of his family home in Spring Plains, Victoria. Through staying unwaveringly true to what they know and not letting their bands’ international status interfere with their salt of the earth personalities, Cosmic Psychos have spawned a new breed of edgy larrikin rock bands over the course of 15 releases, and a handful of lineup changes. Now touring on the back of their latest LP, Loudmouth Soup, and the reissue of studio/compilation album Glorious Barsteds, the trio recently found themselves being the chief instigators of all the typical hilarity and hooning around that Sydney crowds have come to expect from an iconic punk venue with its very own ‘Piss-Tine Chapel’; the Lansdowne Hotel.

Unhinged urban young-guns Concrete Lawn were first to warm up the crowd, a retro-tinged four-piece who’ve managed to rack up support slots to Tumbleweed and Amyl & The Sniffers during their short time together as a band. With front-woman Maddison eager to leave a mark on the memory of the packed crowd, her fierce onstage persona and wild vocal delivery propelled the young musicians through any obstructions in their path as Concrete Lawn cemented their reputation as an important act to keep an eye on.

Sydney mates Dan, Jono and Tim make up ARSE, a hardcore, noisy and semi-psychedelic trio who trade heavily in brute-force, cathartic anger and tense pummelling rhythms. As the second band to grace the stage tonight, ARSE sent the crowd into a frenzied writhing mass of energy while tipping the scales of abandon with some of the more free-minded punters. Having honed their negative approach with a handful of support slots for Totally Unicorn and a whole lot of other urban bands, with two shows supporting the Hard-Ons later in the year, ARSE bared all in a bitter, modern set of aggressively stripped down tracks.

As our celebrated headliners took the stage with guitarist John ‘Mad Macka’ McKeering (formerly of The Onyas), drummer Dean ‘Not A Vegan’ Muller (Hoss, Chris Russell’s Chicken Walk), and their trusty longtime roadie/stagehand Digger, Knighty growled an array of honest and juvenile words above his filthy, fuzzy bass-tone, like the Aussie equivalent of Lemmy. We witnessed the Cosmic Psychos firing happily on all cylinders as they played their most famous song ‘Nice Day To Go The Pub’ early in the set, followed by recent Loudmouth Soup single ‘Feeling Average’ and old-school belter ‘Custom Credit’, rewarded with some cans of Young Henrys APA from Digger. As the front of the crowd violently ebbed, flowed and collapsed a couple of times with a few people waving their toothbrushes at the band below a succession of crowd-surfers, one dreadlocked headbanger jumped upon the stage four or five times in a row but Knighty, Macka and Dean took it all in their stride and laughed it all off, focusing on knuckling down to keep the energy up.

A quick-witted array of sports jokes maintained the jovial mood, as the old-school rockers yarned briefly about politics, weather, and took the piss out of the modern pop scene. The Lansdowne’s sweaty, boozy, humid haze was unrelenting as the Psychos followed on with ‘Dead In A Ditch’ and ‘Nude Sheilas On Motorbikes Drinking Beer’, with Knighty joking about the latter to say that U2 and Coldplay would really like to cover it. A performance of vintage deep-cut ’74 Seconds’ was then attributed to the space-race being “back in fashion” (Knighty), with Mad Macka randomly thanking tennis-player Nick Kyrgios for the entertainment, describing him as “the biggest fuckwit since John McEnroe”, leading to a performance of Cum The Raw Prawn’s second single, ‘Fuckwit City’. After drummer Dean ‘Muffler’ was given a generous opportunity to let loose behind the kit in thunderous Bonham-esque style, throwing in some jazzy snare and stick tricks from the books of Buddy Rich or Gene Krupa, the group charged into a thundering rendition of their iconic track ‘Lost Cause’, and a version of ‘David Lee Roth’, with Roth’s name being substituted for the aforementioned Nick Kyrgios, (“I want the umpire to suck me off”). By this point, Mad Macka had gone topless to show off his impressively large beer belly, with a yell from the crowd to “give us your shirt!” Speaking in a sun-baked bogan drawl, Macka’s simple reply was “I can’t give you me shirt, I have to wear it home”, (before the crowd member jumped on the stage and gestured to make a trade). After all three Psychos had taken a theatrical bow to the cheers of the Lansdowne crowd, Knighty was able to rest from the pain of requiring a hip-replacement, (as Campbell from Concrete Lawn tells me), though he once stated in an interview that he’d like the band to keep going until he reaches the ripe old age of 83. As the Cosmic Psychos made a bee-line to the bar to keep their booze intake flowing, they also prepared for a secret 10AM show at the Newtown Hotel the following day, for those really ‘in the know’. ’Glorious Barsteds’ indeed.

“Every night you want to bring your best to the audience and you kind of want to show the band you’re touring with, what your best is”

The Casanovas: Rock N Roll Over

“Damo and I were joking that we should do some kind of publicity stunt and play a show on a rooftop somewhere, and get arrested”