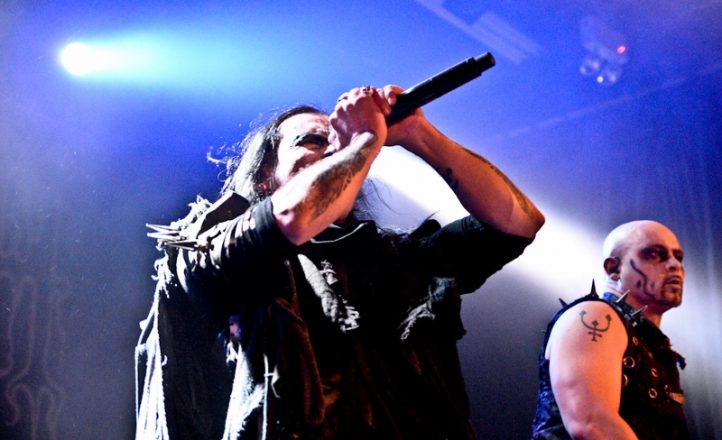 It’s been five years since Cradle of Filth last graced Australian shores, during which time they have produced two of their most well-received albums in years and assembled a line-up said to be one of the most cohesive in the band’s history. On this appropriately wintry May evening, close to a full house at the Metro was about to learn if that reputation was deserved.

Tonight’s opening honours went to locals Somnium Nox.  Their performance is almost hypnotic, with a take on black metal that incorporates soundscapes and atmospherics, indistinct, almost whispered vocals from a near-motionless, hooded shape at the front of the stage, and a didgeridoo adding further mystical effect. It was a mesmerising set that stood in effective contrast to what was about to occur.

With a lot to get through, the changeover was brief before Cradle of Filth drifted onto stage and tore into ‘Gilded Cunt’ as an opener. The pace was set from that moment, the band barely still as they whirled around the stage and each other. Daniel Firth, Rich Shaw and Ashok all pull shapes as they wield their instruments high, moving in crazy orbit around their ringmaster, Dani Filth in leather and spikes, he of the multifarious voices and incredible microphone technique. While Marthus’ drums cannon around the room and Lindsay Schoolcraft’s keys add a dark melody to the sound, Filth’s voice never falters as it shifts from a snarl to a shriek, the band hurtling through ‘Beneath the Howling Stars’, ‘Blackest Magick in Practice’ and ‘Heartbreak and Seance’ from the most recent offering.

On the twentieth anniversary of Cruelty and the Beast, however, it is that album’s centrepiece ‘Bathory Aria’ that dominates the main set this evening, this version of Cradle of Filth, dynamic, united, fucking vicious, empowering their sprawling, cavernous epic with the very enormity of its subject. This is a true masterclass in extreme metal, efficient and ruthless with barely a pause except for Filth to make some humourous, pithy observation. Enough for a quick breath before another round, Shaw and Ashok tearing into their guitars, Marthus ceaseless in his onslaught. The encore builds in intensity as if the main set wasn’t enough, Cradle finally bringing the night to a close with ‘From the Cradle to Enslave’. Any doubters they may have had should be silenced – tonight’s show was an  eminent performance by a savage and precise metal band.

Gilded Cunt
Beneath the Howling Stars
Blackest Magick in Practice
Heartbreak and Seance
Bathory Aria: Benighted Like Usher/A Murder of Ravens in Fugue/Eyes That Witnessed Madness
Dusk and Her Embrace
The Death of Love
You Will Know the Lion by His Claw
—
The Promise of Fever
Nymphetamine (Fix)
Her Ghost in the Fog
Born in a Burial Gown
From the Cradle to Enslave