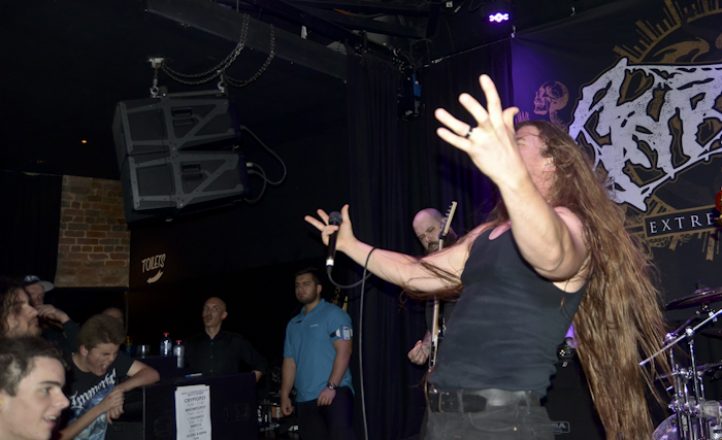 The mood was electric, the air humid, the crowd hyped.

On their Reign Of Suffering tour, French-Canadian death metal gods Cryptopsy and three other proud Aussie technicians of grind made a show that was as exhaustive for the audience as for the bands themselves. When the punters pried themselves away from their adjacent cluster, we left still in awe of the violence of the notes, chords and rhythms we had just witnessed. There was no easy comedown from the musical rage.

Canberra based ‘Australian fucking grindcore’ band Wretch warmed up the relatively small crowd at a-bit-after-eight, for a tidy set of straight-ahead savagery. Both Wretch and Whoretopsy took a leaf from the book of King Parrot, and made no bones about concealing their ocker roots, which was great to see.

“All the ladies at the local IGA like to treat him with a free slice of Don Strasburg” – ‘Wouldn’t Hurt A Fly’, Whoretopsy.
Vocalist Benji went full bore, spending an equal amount of time in the scattered crowd as on stage, and Wretch, like all the other bands in attendance, put their all into their songs, but the fact of the matter was that the actual music got tiresome after 3-4 songs. Benji’s grating screams were unvaried in pitch and dynamics, and sounded flat amidst the jagged riffs, so thankfully variation was provided by bassist Marcuzz sharing the mic. Minimal gaps between songs enforced the relentlessness of the set, with the audience only realising how barraged they had been when three unusual clean prog chords severed the furiosity. Like all the bands there, Wretch used digital samples; theirs being quotes from Need For Speed and Full Metal Jacket, with a strange bit of ‘rainbow pop’ thrown in for contrast. However, I think the humorous Aussie quips and samples were compensating for the mundanity of their music. Fun, but flat.

Youngest band of the night, I, Valiance, got the crowd moving with a brutal blend of djent, deathcore, grind and electronic trap/reggaeton beats. You could have mistaken some of their members for high school students: bassist Gabe wearing a Korn hoodie with a baseball cap; however intelligent, sharp songwriting anchored each song. A clever blend of electronic fade outs and FX integrated well with the music, and all members had a flair for the dramatic, with wild stage moves and presence. Vocalist Dan used both guttural growls and high screams to great effect.    A refreshing young band, whose combined youth lent itself to imaginative ambition in the form of experimentation and genre-mashing.

Whoretopsy made their presence known with a simple ‘How ya fuckin’ goin?’ before launching into a set both technical and barbarously simplistic. Hailing from Melbourne, the band maintained venom and hostility throughout their set; vocalist Storma death-staring the crowd with animalistic spite. As the hammering drums combined with vicious riffs to batter the audience, the mosh finally started at a few minutes to ten. With the precision, speed and volume of Whoretopsy’s repeated slammage after I, Valiance and Wretch, exhaustion was probably felt by some audience members. After all, the bands had played their hardest.
With the size of the room, an intimidating intimacy was achieved that ensured full attention and emotion was paid to all bands, no matter how tired one may have been of the artillery of sound.

However, any weariness that may have been felt was instantly eradicated as headliners Cryptopsy stormed the stage early, after a short display of almost inhuman ability by only remaining original member Flo Mournier sound-checking his drums.

The always recognisable sound of the ‘Crown of Horns’ intro created a subsequent surge of punters, as people flooded to the front of the room and made way for The Mosh. New vocalist Matt McCathy worked the stage like a man possessed, providing a more than capable replacement for Lord Worm with his fierce persona and unearthly, low howls.

Stage banter consisted of numerous “Come on, Sydneys”, with a “CIRCLE-FUCKING-PIT” being called for halfway through the set. As punters soldiered through the crammed crowd, beer in hand, the surreal image of floating balloons and iPhones against a wall of sonic extremity made for a particularly memorable image. Beginning with ‘Crown of Horns’, with new banger ‘Two-Pound Torch’ as fourth song, ‘Graves of the Fathers’ towards the end and ‘Slit Your Guts’ as encore, Montreal’s favourite sons of the extreme left the Newtown Social in ruins.