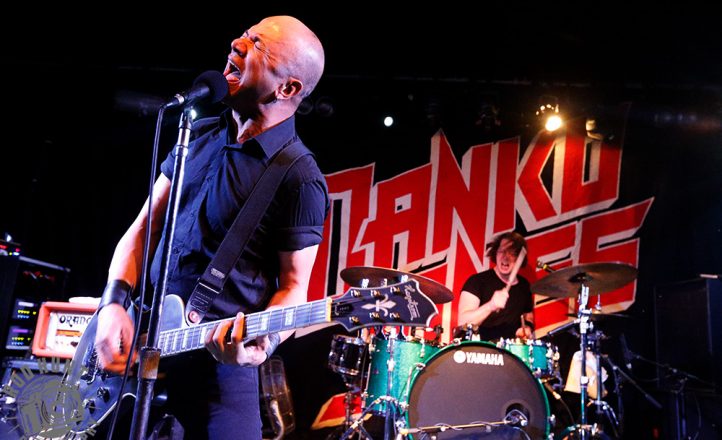 Back in 2004, Canadians Danko Jones ventured to our shores as part of their tour for their 2003 album We Sweat Blood. It was their first time here; their second visit appearance at 2013’s Soundwave Festival put them on the map. Energetic, charismatic and unfiltered; they were notable and since that time they’ve put a few more albums under their belt and continued to impress crowds on many an international tour. They were due to return here in May but it was postponed to Spring. What a great start to the season, as those who caught the show experienced a whip smart, no-nonsense, eighty minute set.

First up, Central Coast based four-piece Screaming Eagle set the mood with some straight ahead rock and roll. They look to be a band to check out and their touring credentials show support slots for well-established rock veterans of the pub rock era, amongst others. Tight guitars including swift solos from Foal Cronin and decent riffs and vocals from front man Matt Piper are backed by a solid rhythm section. They have a debut album sorted and with a good live rock sound happening, look promising.

Second support band was Sydney’s more punk influenced four-piece, Black Heart Breakers, who delivered an interesting 30-odd minutes set. Opening with a bass driven intro for ‘Why Not Me?’, the band selected tracks from their recent Rotting Out EP and their debut album. Fronted by bandana wearing vocalist and guitarist Haydyn McGoogan, it was a melting pot of musical influences but overall, done in a short, sharp and punchy manner. Backing vocals and traded guitar solos between the two guitarists bounced off the simple but effective riffs. There was even a bit of reggae styled drums countered by splashing cymbal work.

he track ‘Angels Takes Me Away’ contained a catchy solo whilst further songs ventured into a heavier rock and punk vibe with held chords until they changed tack with some jangly, chorus driven punk pop to slower, almost reggae infused rhythms. A cover of The Police’s ‘So Lonely’ gathered pace with shared vocals between drummer and guitarist. More fast punk came with the track ‘Burning Out’ which would probably appeal to The Living End fans. Their final track of their set contained some slower harmony guitar parts and repeated lyrics for added effect. Certainly a solid effort and stylistically mixed. Not bad at all.

If they were still jet-lagged from touring, it didn’t show, because once the lights dimmed and the band hit the stage, the energy was immediately infectious as whirlwind guitarist and front man Danko Jones, in black shirt and pants, led the charge with the fast opener of ‘I Gotta Rock’ from Wild Cat. The three-piece was rounded off by John ‘JC’ Calabrese on bass and Rich Knox on drums, both of whom kept the engine room going as Jones pretty much prowled the bulk of the stage when not glued to his microphone area and cranking out the riffs with his whole body moving in time with each hammering drum beat.

Ripping straight into second track, ‘Fists Up High’ from the latest album, A Rock Supreme, Jones made his way to centre stage for one of many bluesy, riff based solos of the night. He would also gesticulate, point at the crowd between riffs and offer up some intense facial expressions as he committed himself to playing his material with dedicated passion. As a vocalist, Jones could be described as part Rollins and part Hetfield but with an evangelical fervour with stage banter only in the revving up variety. The Danko Jones experience is self-referential to the point of irony with some self-deprecation and industry digs within the sprays which were always entertaining.

‘The Twisting Knife’ saw more of the same with power chords and sliding, rolling riffs, backed by vocal harmonies from the rhythm section. Two more new album tracks appeared with the bouncing and vocal driven ‘I’m in a Band’, complete with cowbell and the cyclic chordal riff and catchy chorus of ‘Lipstick City’. They were set highlights that had the audience singing along and worked well to book-end two snappy tracks from much earlier album Sleep Is the Enemy.  Both ‘First Date’ and ‘Invisible’ had the audience engrossed.

Tracks from Fire Music, Never Too Loud and Rock and Roll Is Black and Blue got an airing, all of which were solid, fast, raw, percussive and yet with a catchy melody line. Solos ranged from single note repetitions to wide bends, harmonies and accentuated notes.

A triple batch of songs from Below the Belt was likely to be the show highlight for many punters. Starting with the fast riff of ‘Full of Regret’, added cowbell and alternating chords pushed it along quickly to be followed by ‘I Think Bad Thoughts’ with a quick chorus, building verses and a rapid downstroke guitar rhythm figure. ‘Had Enough’ had powering vocals, a riff synchronised between Jones and Calabrese plus some nicely sustained guitar chords.

Thanking crowd and promoter for organising the tour, Jones smashed through the dynamic new album track ‘Burn in Hell’. Main set closing track was the cracking ‘My Little RNR’ which invoked another sing along chorus.

After barely leaving stage to commence an encore, Jones’ banter contained some confident next tour venue size targets before playing ‘Sugar Chocolate’ from an EP released over twenty years ago. It delivered more vocal driven but shuffle beat influenced punk rock ahead of the final track of the night.

Danko Jones has a ferocious stage presence and tonight’s long awaited headline show reinforced his hard earned reputation. They also had a clear live sound, were well rehearsed and packed in over twenty tracks into the set list. Danko Jones is the real deal, providing a show with no dead space from start to finish. No band can manufacture the captivating delivery at the core of the Danko Jones show. Simply, it was a highly entertaining show and a welcome return.