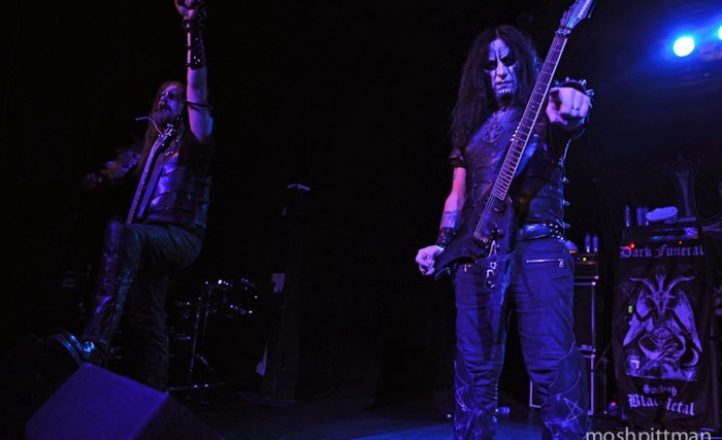 As a keen student of the necrotic arts, on the night of Friday 23 November Hoss attended a live ceremony of much import to the kvltural life of the emerald city. What follows is an account of these proceedings, such as he was able to recall upon emerging from the grip of grim-induced catatonia.

First up were Katabasis, who have been hitting the road quite hard of late. It’s not hard to tell, such was the quality of their wares this fine eve. The word Katabasis means some kind of downward movement, which seems fitting as these fresh-faced  youngsters set the crepuscular bar rather high for the evening. Or maybe that should be low. I’m confused. I’m also joking about the fresh-faced thing. They’re ugly as fuck.

Hoss believes that one should always approach a gig with an open mind, but it must be said that Gods of Eden seemed a strange choice for this lineup. After viewing their set of fair-to-middlin’ progressive metal, Hoss has come to conclusion that he really doesn’t like this band. Although their de-butt EP has received some extremely positive press the crowd’s reaction to their set was mild at best. That rhymed. Looking alarmingly like a Spanish pirate, one punter I shared an ale with afterward put it best when he proclaimed, whilst waving his cutlass with abandon and thrusting his goblet forward effusively, that although they are clearly all proficient musicians, it’s difficult to understand the appeal of the band as a whole.

Southern Highlanders Norse put on a damn fine show. Armed with a slew of tracks from their recent sophomore effort, All is Mist and Fog (MMMMMMEEEETTTTTTAAAAAALLLLLLLL), they tore the shit up. Frontman Treelo Herrington quickly became the night’s first addition to the Hoss Bro-hero Archives™, whipping those dreads about and demonstrating just how good Australian black metal can actually be. Everyone one should follow him on Twitter, because he only has about 26 followers and he uses hashtags like #pruning. It’s pretty rad.

A significant delay later, Erebus Enthroned brought the grim, as they always do, including a glimpse of some new material that sounds very promising. Without wanting to establish too much of a theme here, their awfully skinny frontman Nihilifer also has received a spot in the Bro-Hero Archive™. This was primarily because he does an excellent deranged googly eye (an indispensable talent) and because his ‘watch me support my weight on this mic-stand and throw my arms aloft’ stage moves reminded me very much of the picture from the inside cover of Taake’s Nattestid Ser Porten Vid, before Hoest got all buff and banjoey. On the ghastly ship Erebus Enthroned, where Nihilifer was the figurehead, drummer Versipillis was clearly the anchor. He was smashing skins like it was no one’s business, which is, speaking frankly, complete bullshit. As a paying audience, it totally is our business. What an asshole.

Anyway, a disclaimer: I don’t know Dark Funeral that well. Have heard all of their records but never really caught the vibe. As a general rule I rep Norway till I di-zay (die) anyway, so I never pursued it. My allegiances may have clouded my judgement. Dark Funeral are inarguably one of the largest bands in the Scando scene, and my Odin do they deserve that honour. Despite kicking off with a couple of minor technical hitches, by the end of the show I was well and truly ready to lay down my Krag-Jørgensen pistol and embrace this mighty Swedish force as true brothers of the black mark. While only Lord Ahriman remains of the original Dark Funeral lineup  all the members are of a certain vintage and collectively they made it quite apparent what you get when you pay to see a band that draws its heritage from the original second wave black metal period. The tightly delivered and incessant brand of black metal that they pitched at the audience, combined with clear professionalism and a well refined sense of theatrics made an instant convert of this reviewer.

Although a new addition to the lineup, the final addition to the Bro-Hero Archive™ for the evening was Dark Funeral bassist  Zornheym, who was absolutely everything you want a black metal performer to be: a feral and menacing long-haired demon spawn of beelzebub pacing back and forth grimacing at the crowd. No doubt conscious of ensuring lifetime membership in the Archive, he also happened to be the last member of the band to leave to stage, staying back to shake hands with the entire front row as the rest of the satiated crowd filed out of the venue.