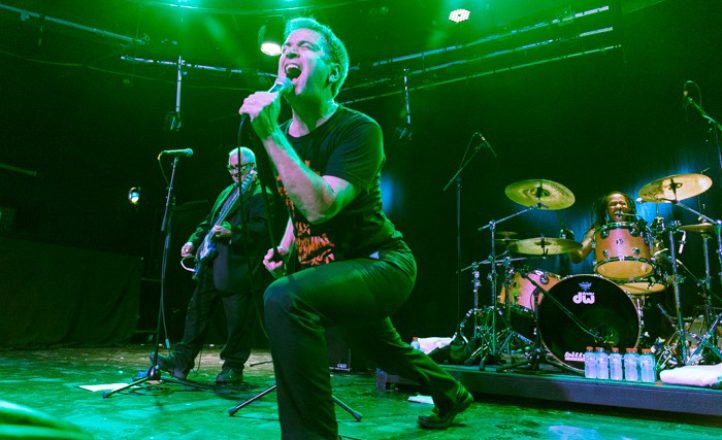 Heading down to the Dead Kennedys show in Perth, the Jello Biafra talk was rampant, with punters even questioning what they were doing waiting in line for a show featuring the Kennedys without their punk royalty ex-leader. Jello is still going strong of course, himself in town last year with one of the gigs of the year for the Perth scene. Thankfully the punters were rewarded for their faith in this ensemble, however. The original cast of bass player Klaus Flouride, all 65 years of age these days, the bespectacled East Bay Ray and D.H. Peligro, the band’s drummer (for most part) since 1981 showed that the band is still very much capable of putting on a great performance. When the vocals everyone knows off by heart and those riffs come flying in, special things happen.

Prior to the Dead Kennedys history lesson, two local bands hit the stage, unfortunately for the most part playing to a sparse reception due to the ridiculous start time of 6pm. Only in Perth hey? Dirty three piece punks Leeches kicked off the evening and the boys were in fine form despite the lack of activity in the venue. Smashing their way through tracks from the album Lords of Dullsville and their recent split EP with fellow punks, Agitated, the band at least blew the cobwebs from the creaky speakers with a tight, relentless session. Another Perth music staple, Chainsaw Hookers played next and blasted out yet another impressive set. These guys never fail to deliver an amped up performance and even with a fill in guitarist, Horse, from The Bob Gordons stepping in for Alex Cotton, the sound was spot on. Ripping through regular classics, ‘Party Man’ and ‘Death Curse’ amongst others, the Hookers enhanced their reputation once again as one of the premier hard rock bands on the west coast.

As the crowd filtered in, a quick surveillance of the room showed a vast range of attendees, everything from your local teenage Gen Y dirtbag to guys that perhaps required written permission to attend the concert from their local GP. Yep, the Capitol was an interesting entity this Saturday night, and perhaps the early start and end time for the gig was a good thing for some. Sauntering onto stage, the Dead Kennedys looked an unlikely gathering of musicians. D.H Peligro belied his age, decked out in aerobic skins, long hair and ripped like Wesley Snipes. The guy looked ready for anything thrown in his direction. East Bay Ray with his iconic spectacles and dazzling white shirt and trousers looked dapper. Vocalist ‘Skip’ Greer appeared confident and frivolous sipping on a glass of wine in a pair of black dress trousers and t-shirt, and finally Klaus Flouride, the 65 year old grandfather of punk, decked out like he was ready for the next bridge game at the old folks home. You could forgive people for thinking what the hell they’d forked out money for right there and then.

With stage set and a simple 1,2,3,4! count-in, Peligro leads the band straight into ‘Forward to Death’ and Greer automatically syncs into Jello style throwbacks and ungainly jigs,  launching into the lyrics. “I don’t need your way of life, I can’t stand your attitudes, I can do without your strife, I don’t need this fucking world” — suddenly it doesn’t matter whose singing or who you’re standing next to or even what time it is. This is punk rock and God dammit this is the fucking Dead Kennedys! Greer’s vocals sound strong and whilst he has obviously modelled himself on the former head honcho of the DK enterprise, it comes off natural and not a forced portrayal. Flouride hits every note with purpose and East Bay Ray is a consummate pro, filtering through each riff and psychedelic twinge to perfection. When Ray leads off that magical intro to ‘Police Truck’ it engulfs the club, a manic force moving en masse towards the stage. Greer thrusts his mic into the sweaty pit during each chorus and the punters lap it up, devouring the attention. ‘Let’s Lynch the Landlord’ and ‘Jock-O-Rama’ command similar crowd response before the frontman lets loose his Jello-like political rant about Tony Abbott, then going off on a tangent about things from football to the people at the back of the crowd understanding everything he was saying. It was very Jello, but no one cared, the crowd were in the moment and the punk dial was quickly rising to past its breaking point, especially when ‘Kill the Poor’ entered the fray. With bodies now flying in the pit every which way, it didn’t matter who was on stage so long as the songs were fast and had a punk melody. Flouride’s backing vocals were well rehearsed and timed to perfection with Greer using the crowd’s intensity to help him get through the well-known choruses, not that he needed help. It was just more entertainment and the crowd obeyed his directions when given chance.

U2 copped another Greer rant before band launched into ‘MTV – Get Off the Air’ with a slight lyrical change to modern times, now re-named ‘MP3 Get Off the Web’. Peligro took the mike to speak briefly about racism before the band launched into a ferocious rendition of ‘Nazi Punks Fuck Off’ that had the place shaking from the pit’s now epic pseudo violence. Even the side of stage presence of security and tour manager couldn’t stop the odd punk from climbing onto stage before stage diving off into unsuspecting band gazers. ‘California Uber Alles’ completed the main set with all and sundry participating in a sing-a-long to one of the most well-known and lyrically brilliant punk songs of the 20th Century.

The first of two encores, ‘Viva Las Vegas’ got the crowd moving again, with Fluoride’s comic Elvis upper lip movement not going unnoticed with fans around his side of stage with the laughs almost drowning out the vocals. Peligro’s smile in the background said it all. This was a band that despite all the behind the scene bullshit still know how to enjoy themselves and clearly the band are revelling in touring at present. ‘Holiday in Cambodia’ had Greer heading into the pit with mic in hand to sing most of the track whilst getting crushed by far larger individuals. Another Jello-like moment, but again, time and place, no one cared, it was sheer punk level enjoyment and kudos to Greer. Another quick walk off before a secondary and final encore with the band playing ‘Chemical Warfare’ in all its glory then trailing off to the sarcastic lines of ‘Sweet Home Alabama’ with middle finger firmly raised in true punk style to the crowd and perhaps to the management at the Capitol for having to finish at 9.30pm on a Saturday night. Still, a great early night for all. Haters gonna hate but they needn’t waste their energy, Dead Kennedys are still squarely at the head of the table when it comes to the Kings of Punk, even without Jello.