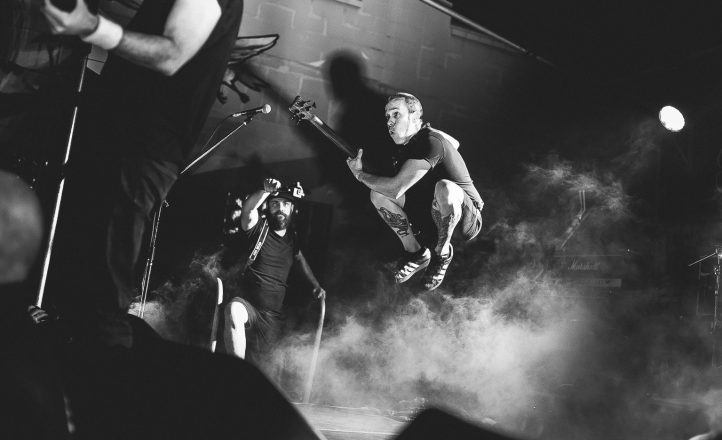 Celebrating its 10th year, Dead of Winter again promises big things. Having grown more and more with every year, every success bringing more stages and larger acts along with it, with the expansion comes the problem of set time clashes meaning you can never seem to catch a full set of any particular band, with the exception of the ‘must see’ acts that everyone would choose differently.

This also allows for the catching up of old friends and new bands as you wander from stage to stage, and with the festival being spread between venues, the short wander up the street from The Jubilee to The Tivoli adding an extra degree of difficulty in catching world class sets from so many brilliant acts.

So, your journey with this intrepid punter begins at The Tivoli.  After a slight hitch getting into the venue we get inside in time to catch a few also arriving mates and ready ourselves for From Crisis To Collapse. The early set time on the main stage does not dull the band’s performance as their manic energy set up the assembled audience for the big day ahead.  Not even a stand-in drummer with only one rehearsal slowed them down.

From here we take the short 300m walk downhill to The Jubilee to take in as much as we could before the next full set that interests us. First up we catch Something Something Explosion with their pop punk energy entertaining the early afternoon crowds attention on the largest stage in this venue. A short skip away to the Deck Bar Stage sees Potion playing their stoner/doom Black Sabbath driven music with the bar area packed in tight. It is great to see so many people out already this early in the day.

A quick trip to the small stage upstairs catches The Gatsons  and their more early 00s Hinder-style mum-friendly rock, not this intrepid listener’s taste, but they hold sway over their fans with the small space packed in rather tight.  The first surprise catch of the day is Brisbane’s Tai Sui, an eclectic mix of most elements of modern heavy music with some sampling and electronic elements throw in, creating a heady mix of music that was surprising at first and great overall.

Earth Caller have been making waves for years now on the Australian scene, and was a ‘must catch’ for the day.  Sadly for the band it seemed that there wasn’t many people that agreed with my take on things.  Playing on the biggest stage to less people the some of the smaller stages might be disheartening but they play a blistering set regardless of who is here to check them out. A Night In Texas follow them up on the same stage and have attracted great numbers for their deathcore, but towards the end of their set the people start making way to the small outdoor stage; curiously we follow them to discover Nick Oliveri has taken to the stage 20 minutes before his scheduled set time with nothing more than his acoustic guitar.  As he plays through a set of material beating on his guitar with a lot of fire and heart, it was great to be able to catch a part of his set.

Back to the small stage at The Jubilee and Piston Fist show why they have made such great headway in the Brisbane music scene. The band lock in together well playing their unique take on heavy blues rock with metal thrown in. Hard to ignore is the drummer wrestling with the kit throughout the set, hitting it like he may never do it again, adding an extra flair to an already exuberant band performance.

The Decline  are on the main stage at The Jubilee with their fun loving pop punk creating a great mood in the late afternoon sun, just the ticket for the few punters that are already starting to get a bit too much beer into their system.  Meanwhile over at the beer garden stage, Minus Life were once Brisbane’s answer to the mechanical metal of Fear Factory.  This still holds true as the band blaze through a set that attracts people from around the venue.

Earlier this year Brisbane music lost one of its punk originators in Rollo, the vocalist for the Blowhards. Tonight the band close their storied chapter as they use a range of vocalists from within the Australian punk scene, the most famous being Jay from Frenzal Rhomb, who jumps up and sings a couple of the band’s best known numbers as their set descends in to a raucous farewell party for a much loved member of our music scene.

After such a heartfelt affair the rest of the evening goes by in a bit of a blur. Great sets are played by Aversions Crown and Mammal, whilst headliners Cog have everyone in front of them with the exception of the diehards that are in the Jubilee to see Disentomb, lifting the roof from the venue as the headline in that venue.

But nothing really beat the catharsis of the final set from Blowhard. RIP Rollo.