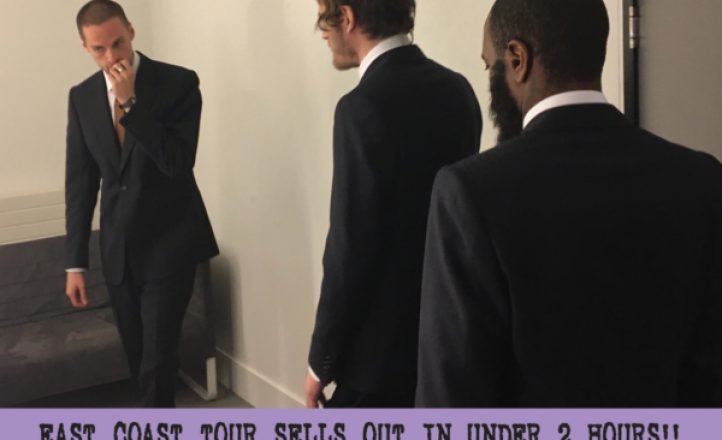 Experimental hip hop group Death Grips have been taking the world by storm since the release of their first Mixtape Exmilitary in 2011 with their unique blend of hip hop, industrial, hardcore punk and dark ambient, among other influences. They may not be a metal band, but they certainly have the spirit of one. As far as I know, this is only their second trip to Australia since their set at the Big Day Out in 2013. The three-piece are quite the enigma, especially frontman MC Ride, aka Stefan Burnett. They make little public appearance and rarely do interviews. And they’re not ones for audience/fan interaction. Drummer Zach Hill seems to be the least camera shy, especially since he snapped a picture of his penis for the release for the band’s second official album “No Love Deep Web” in 2012. Nevertheless, their Australian tour was highly anticipated. The Sydney show originally sold out in less than 4 hours before it had to be moved from the Metro to the Enmore.

First of all, I must comment on the crowd at the Enmore. I have seen several bands this year, most of them at that venue, and I must say this was one of the worst, most rowdy and inconsiderate crowds I’ve ever had the displeasure of being in. Before the show even started there was a collapse in the pit from rowdy teenagers in the back who simply could not stop pushing even though there was nowhere for people in the front to go. People on the floor were chanting “Jump! Jump! Jump! Jump! Do it faggot!”  to people on the upper gallery level, others were lighting up cigarettes in the moshpit and flailing them around with no consideration for other people’s eyes. Once the show started, I had to help two small women out of the mosh pit who were in danger of being crushed, and despite their frantic cries and pleas for help, I seemed to be the only person actively trying to help them out of the pit. The theatre was packed to maximum capacity and people didn’t seem to understand that means there isn’t enough room to push the crowd further up the front. So if I had to rate the crowd out of an American Academic grade, it would get a straight F.

On to the band. I must say while I was impressed with the energy and intensity of the performance, I was very disappointed with the length of their set and their delayed appearance. Death Grips were supposed to take the stage at 8:45 but their set did not start until almost 9:30. And then once they did take the stage, they only played for an hour and left without an encore. I was just getting into their set when it suddenly finished at the end of ‘Guillotine’. My first reaction was “That was it?” I wouldn’t have minded as much if they had a support with them, but there was no support. It was just them. I found myself standing in the Enmore for almost 90 minutes before their set came on, not counting the length of time I spent in the line outside. It’s not fun standing in a crowd whose intention it seems is to cause as many crushes and injuries as possible for 90 minutes while you wait for a band you paid $50 to see.

As for the performance itself, the sad thing about it is that it was nothing short of amazing. The entire band has this almost punk rock energy to them that most bands, especially within hip hop, fail to meet the standard of. You could almost see MC Ride become progressively soaked in sweat with each song and the intensity of his vocal performance was astounding.

Death Grips does a great job of recreating their studio sound in a live context with the added dimension of their energetic performance. Zach Hill is a human drum machine. The man appears to be a blur behind his kit. His math rock background is true to form as he kept it up all night and had no signs of stopping. Andy Morin, the band’s producer, keyboardist, programmer and audio engineer puts most DJs to shame by being able to give a truly brilliant performance behind nothing but a synthesizer and an Apple iMac. The man could give Trent Reznor a run for his money. But as a whole, their set felt almost like sex without an orgasm. An amazing amount of build up, a short period of fun followed by a sudden, unsatisfying end. Death Grips is set to support Ministry on their US tour, and I can’t help but feel that would be a better gig to see them at. I would say that from my personal experience, I’d only recommend seeing Death Grips, as good as they are, if they are on the bill with at least another band in order to get your money’s worth. But if you don’t mind the horrible obnoxious crowd, the lackluster set length and delayed start then by all accounts, you’d probably love their performance, because that in itself was incredibly enjoyable.