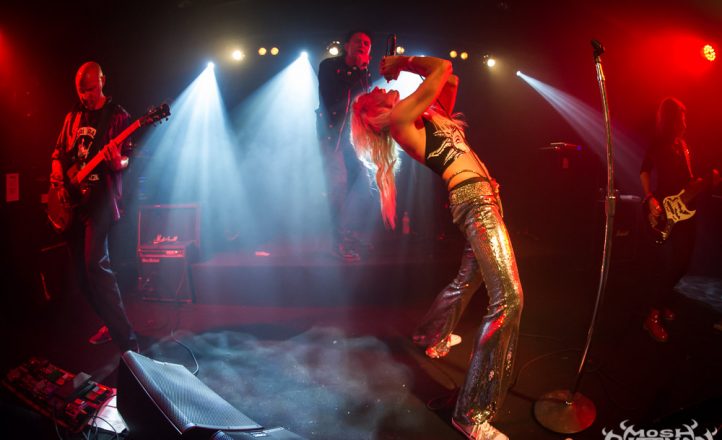 After the disappointment of a cancelled tour two years ago, electro-surf rock legends Def FX blasted back into Sydney’s live orbit at the Crowbar this evening.

Almost certainly the band’s last hurrah, their set was prefaced by a noise of a completely different kind provided by the lads from Nunchukka Superfly. With a new double vinyl album set to drop sometime this year, the Hard Ons’ evil twin stepped up as the only other act on the bill this evening. Not so much playing but unleashing a set of ragged, punked-out prog-rock, Nunchukka Superfly were as crushing as they were exacting; doubtless a percentage of the crowd conditioned to the more straight forward rock of the headliners may have found refuge in the bar outside as the trio rained down heavy jams and solid volume, Blackie raking his impossibly low-slung guitar, perennial wingman Ray providing the bass gymnastics at the other side of stage. The new album can’t come soon enough.

Def FX bounded out with the opening notes of “I’ll Be Your Majick”, and bounded is what Fiona Horne certainly did, a seemingly unstoppable dynamo of energy twenty-plus years since this band spearheaded the Australian indie music scene. As a farewell show, there was a lot of ground to cover and the band dug up hit after hit: surf-rock laced “Under the Blue”, the angsty electro-punk anthem “Kill the Real Girls”, the throbbing techno-rock of “Space Time Disco”, “Headfuck”, “Spell on You”. A nostalgia trip it most certainly was, but at a time when both nu-metal and pop punk appear to be thriving once more, Def FX don’t sound anywhere near as dated as some might expect. Yet it was pleasantly surprising to discover how well those songs still stack up and how explosive and punchy they can be delivered even relying as heavily as they do on the electronic orchestration of Ash Bannister, taking up the space where a drummer would be with his surrounding array of screens and devices. Horne is, of course, the star, kicking out in silver bell-bottoms, arms flailing as she bounces on her toes and carries each song with the same enthusiasm and athleticism as she always did. The massive bouncing groove of “Psychoactive Summer” closes the show with no issue from the crowd that it was, in fact, the middle of winter. Tonight it was sometime in the summer of the mid 90s again, and everyone went home happy.