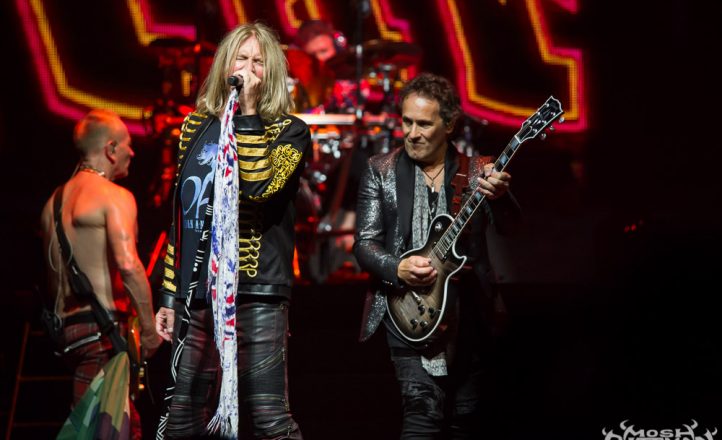 Imagine this: there you are, pottering around in your garden on a mild Melbournian Saturday afternoon, perhaps contemplating a cold beer or several and happily reviewing the gig you played two nights ago at Rod Laver Arena, filling in as support for one of the most iconic hard rock bands of their generation after their equally legendary touring partners had to bow out due to sickness. It was a great gig and the crowd seemed to love you.

Just then your phone rings, and you learn you’ve got to do it all again – in Sydney. After a hurried trip to the airport and commandeering a flight, you arrive in the nick of time and race on stage to save the poor punters who have found themselves lacking a decent band to warm the up for the main event.

…And all you get is apathy and disinterest mixed with unwarranted hostility from several dickheads in the crowd. Way to go Sydney. From one of the punters in the crowd on Saturday night that enjoyed your show: you guys rock!

With an old school Aussie pub rock foundation, unmistakable Melbourne wry humour and solid stage presence Dallas Crane rocked the Darling Harbour ICC crowd, most of them just didn’t realise it. Early technical issues aside Dallas Crane powered through their ‘half hour of power’ with the air of true entertainers. Joking about not being the Scorpions, laughing off sound issues with a good humoured “Get ya act together” quip and trying to whip up enthusiasm from the crowd with playful banter. Alongside their own material ‘Ladybird’, ‘No Through Road’, ‘Get Off the Dope’ and ‘Sit on My Knee’, a couple of surprises popped up in the form of Zeppelin’s “Rock and Roll” and AC/DC’s ‘Let There be rock’. You can tell the Melbourne lads know how to work a room. Just not this room. Shame.

After a short interval, counted down by a giant display covering the stage, the opening riff of ‘Women’ erupted through the PA and there stood Phil Collen, shirtless as is his want, on the catwalk as Joe Elliott beamed his megawatt smile at the crowd. This early in and everyone was totally enjoying themselves. To many in the crowd Hysteria was their springboard album, introducing them to harder edge rock and even full blown metal. Back in the late 80s Leppard were everywhere; designed to be a needle dropper every song on the record could have been a single (and most of them were). Being here tonight to hear them play the entire album live is like soul food for Gen X rock fans.

As one, the crowd and Leppard segue from ‘Women’ to ‘Rocket.’ Vivian and Sav run down from the drum riser to join Joe and Phil mainstage as Rick Allen works his percussive magic behind his custom trap. ‘Animal’ follows and then we are treated to a spectacular laser show for ‘Love Bites’. ‘Pour Some Sugar on Me’, of course, raises the damn roof. There is no doubt Joe and the boys love these songs as much as we do.

Before they launch into ‘Armageddon it’ Joe, followed somewhat sheepishly by a perrenially smiling Viv Campbell, walks out to the end of the catwalk to incredulously declare that “It has been 31 years of Hysteria”and takes the oppurtunity to thank ‘new guy’ Vivian Campbell for joining them 26 years ago. Given that cue, Viv plays the intro and we are off again. There is a short moment of silence as a black and white photo of Stephen “Steamin’” Clark is displayed of the screen above the riser and then a fade into live footage of Joe introducing Clark as he plays the intro riff to ‘Gods of War’. Awesome and poignant.

The last five songs go past too fast with ‘Hysteria’ provoking another sing along and the with the last chords of ‘Love and Affection’ still ringing the lads are gone. For about a minute. Pre and post Hysteria songs are fired up, ‘Let it Go’, and ‘When Love and Hate Collide’ kick off the encore then the crowd goes nuts again as ‘Let’s Get Rocked’ with all its innuendo and double entendre gives way to ‘Rock of Ages’ and finally ‘Photograph’.

“Thank you Sydney,” Joe screams to us, again from the front of the catwalk, “don`t forget about us… and we won`t forget about you!” I’m reasonably convinced that Def Leppard will be remembered for a while yet!