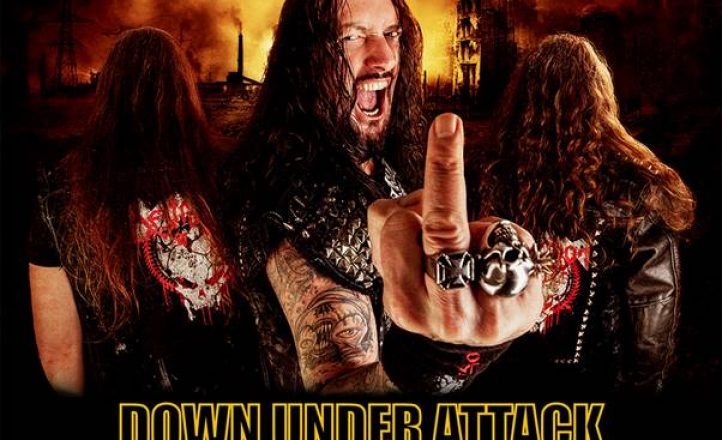 Germany’s thrash metal veterans Destruction show no signs of slowing down. Their recent output continues the trend of releasing hammering material and many head bangers were keen to see them deliver a selection of old classics peppered with new material in a live setting. Prior to this though, local support bands from Sydney Lethal Vendetta and reinvigorated Killrazer had the pleasure of kicking the loyal crowd into gear for the coming Teutonic steamrolling three piece.

From the outset, Lethal Vendetta possessed a heavy sound even if they were a little cramped with Morris Markovic’s drum kit situated at the front of the  stage. The twin guitar line-up of Liam Donelan and Ben Drennan played with a clear Anthrax and Exodus influence in their approach and some decent wide string vibrato to keeps thing interesting. Vocalist Brent Logan prowled the stage adding some good thrash metal techniques with a strong voice. The old school thrash power was on display during the song ‘Deserve to Die’, their second single from their No Prisoners No Mercy album. By contrast, a slower introduction of ‘Plains of Serenity’ soon changed pace to driving thrash with some fast lead guitar soloing added for good measure.

‘Erasing Hate’ included a twin guitar interlude plus a solo that was reminiscent of Megadeth. The rhythm section kept things tight. ‘Salute to the Gods’ was dedicated to Destruction, a swift and punishing precursor to their set closer with the No Prisoners No Mercy title track. Lethal Vendetta delivered a solid opening set and look set to be on the rise. Nice work.

Killrazer were up next and considering their guitarist and vocalist Doug Dalton also ran this tour, it takes some organisation skills to do double duty. The band have endured some line-up changes with Jimmy Lardner-Brown’s lead guitarist place being filled tonight by former member Andrew Lilley of Daemon Pyre. The four piece wasted little time in getting their set going, opening with ‘Unleash Hell’ which was driven by original drummer Mick McCartney’s aggressive blast beats.  Old track ‘Salt in the Wound’ added some thrash metal bounce and nifty, fast Slayer styled guitar solos from Dalton and Lilley.

A false start on ‘Legions’ was quickly bypassed as the rhythm section powered through the song whilst Dalton’s guttural vocals added brutality. The new material heard tonight with ‘Decades of Blood’ was heavy, fast and ferocious. The speed continued with ‘Suicide Command’ along with some wide vibrato guitar solos and more blast beats. Sure enough, another new track in ‘Demons of God’ offered up more brutal death metal. Killrazer closed their set with the title track of The Burial Begins which included synchronised guitar acrobatics and a hint of Sepultura in style.

Having two supports acts deliver some hammering live material, it was now time for the German thrashers to educate the masses on thrash metal, or ‘thrashology’ as Dalton put it during Killrazer’s set. As the lights pulsed red and illuminated the large Destruction banner backdrop featuring artwork for their most recent release Under Attack, drummer Randy Black took up his position behind a pretty substantial drum kit complete with huge double bass drums.

Schmier and Mike Sifringer come on and commenced proceedings with the classic ‘Curse the Gods’ from Eternal Devastation. It was quick, loud and unrelenting thrash followed soon by ‘Armageddonizer’ wherein the ambidextrous Black twirled drums sticks between snare, cymbals and tom rolls and then introduced ‘Tormentor’ from the band’s full length debut Infernal Overkill. Next, ‘Nailed to the Cross’ saw Schmier at the foot of the stage with arms throwing the horns with outstretched out arms.

The hammering vibe continued as they ventured back to Sentence of Death with a feisty rendition of ‘Mad Butcher’. The stage was fully lit with white light as ‘Dethroned’ from the latest album offered fast paced thrash with Schmier leaning into the foldback wedge. A three piece band delivering this material with such a monstrously huge sound was certainly impressive. Schmier’s occasional high-pitched screams were ear piercing and Sifringer’s command of expressive guitar solos with interesting phrasings enhanced the galloping thrash rhythms.

‘Antichrist’ and a rare performance of ‘Black Mass’ continued the early material joys with the intense time signature changes executed perfectly. As chainsaw noises introduced ‘The Butcher Strikes Back’ the bar was shut but that didn’t stop already well-oiled punters enjoying the breakneck pace of ‘Thrash Till Death’ which closed the main set.

Returning for the encore, tonight’s show was of course closed with ‘Bestial Invasion’. It was as heavy as all hell yet still saw Sifringer and Schmier using an old school choreographed stage move, swaying their guitars around. As the house lights came up, everyone was left in no doubt that Destruction are still an incredibly tight thrash metal band who run rings around hyper energised bands half their age. Destruction live are tough as nails and loud as all hell.