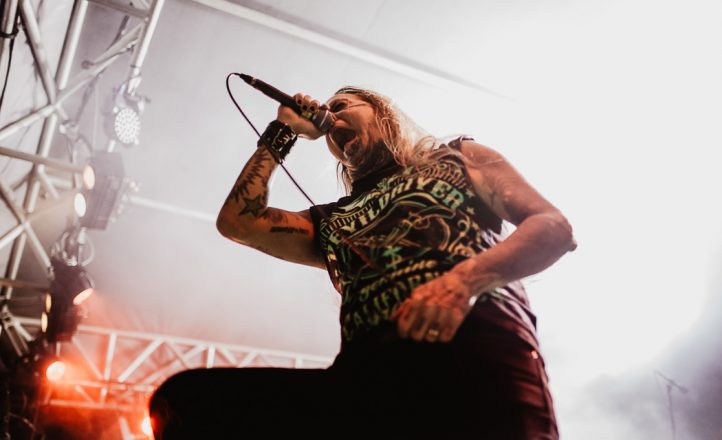 The Valley Drive In is a cosy little outdoor venue that has become a ‘go to’ for heavy small to medium sized gigs in Brisbane.  Tucked in behind The Brightside, another small venue located in Brisbane’s Fortitude Valley, it has the feel of a small carpark with stage at one end, and walls either side allowing great acoustics for an outdoor stage.

Lycanthrope kick the night off with their local spin on metalcore being good enough to earn a decent crowd, whipping the mosh pit into action early.  This is going to be a long night for some people in the middle of that maelstrom.

With the pit sufficiently warmed up, All That Remains hit the stage hard, going straight for the throat with tracks from their popular The Fall of Ideals album opening the set up.  Phil Labonte knows how to work the pit into an even bigger frenzy as the small space we are in begins to feel cacophonous with the energy in the pit squeezing out everywhere.  Kicking in only a couple of tracks from their newest release Victim of the New Disease seems to go unnoticed, although the biggest reaction for the night was for ‘Fuck Love’ one of the heaviest racks the band has in their arsenal.  Late last year the band lost guitarist Oli Herbert, and I was a little saddened to see that no mention was made of him from the band.

After a couple of minor technical hiccups delay the beginning of DevilDriver, the band waste no time in hitting the stage with boundless energy from one of the best frontmen in the game, Dez Fafara upfront and high fiving those that make it over the barrier from the chaos of the pit.  Playing a set that leans heavily on second album The Fury of Our Makers Hand shows off how deep and how great the band’s catalogue is. Playing their cover of ‘Sail’ is as close to a breather as the band is willing to give us and the versions of Coal Chamber’s ‘Loco’ and ‘Fiend’ are beefed up to DevilDriver standards. Before closing the set with ‘End Of The Line’ Dez makes sure we know it is the last song, mentioning that his band doesn’t do encores because he finds them to be ‘pretentious bullshit’ so the pit had better give its all now!

Leaving everyone on the floor wrecked with but massive grins, this has been a show for the ages, lead from the front with the unbelievable energy of DevilDriver themselves.