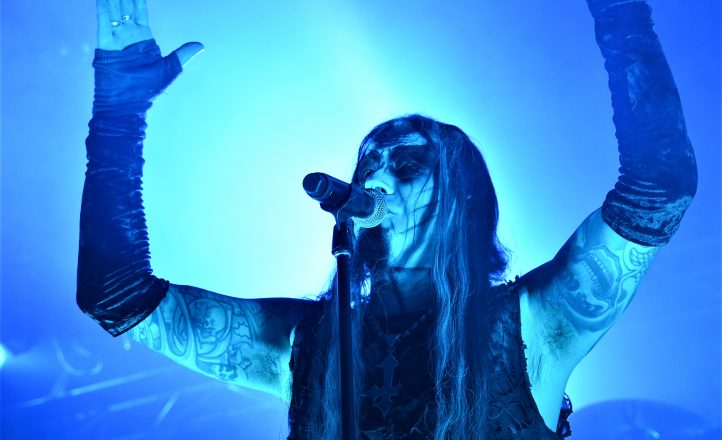 It was an overcast Sunday night at The Metro that brought Norway’s seminal black metal act Dimmu Borgir to Sydney, on their debut headlining tour, having previously performed as part of the defunct Soundwave Festival. They drew a large crowd for what was the final night of the tour. Doors opened at 8 pm, and this reviewer soon found a comfortable vantage point to observe the action.

Perth’s Earth Rot kicked off proceedings. Their set was composed of material spanning their career, and the tracks from earlier releases fit seamlessly along pieces from their latest album, 2017’s Renascentia. Earth Rot were at once triumphant, the Sydney show drawing upon the energies of a successful tour; and hungry, for they performed on this Sunday night with the fervency of a band playing their debut show. The band all bounced of each other quite well, their intensity reverberating off the walls of the venue. At this point, I would like to comment on the sound. I had heard earlier in the day that the sound engineer at an unspecified show, earlier in the tour, had effectively tried to ‘sabotage’ Earth Rot’s set. I am pleased to state that this was not the case, at least from where I stood. Earth Rot’s furious blend of death/black metal rang through loud and clear.

Coming off a successful tour, Earth Rot were in good humour; engaging the gradual awakening of the crowd, and ably preparing us for Dimmu Borgir’s set. The crowd, as stated, was voluminous in number but it took some time for them to ‘wake up’ and make some noise. Perhaps this was owing to the fact that this show was taking place on a Sunday night. Perhaps the crowd were simply anticipating Dimmu Borgir. Whatever the reason, the crowd gradually succumbed to Earth Rot’s calls and morphed into a headbanging, roaring mass by the conclusion of their rousing closer ‘The Ancient Fire’. The perfect way to start the night.

A quick changeover, and Dimmu Borgir gradually emerged amid subdued lighting and a cloud of smoke. Seven years. Seven long years. That’s how long it’d been since they last graced these shores. So, as they emerged there was an outpouring of cheers and rapturous applause. They greeted the audience and quickly launched into the opening pair of tracks from 2018’s Eonian: ‘The Unveiling’ and ‘Interdimensional Summit’. The set included a fair amount of tracks from that album which fit deftly alongside selections from Enthrone Darkness Triumphant to Abrahadabra. Some may criticise the lack of choices from earlier albums, but what was chosen served well to highlight the strengths of the current lineup, which features founders Shagrath and Silenoz, and longstanding guitarist Galder accompanied by long-term session players Daray, Gerlioz, and newcomer Victor Brandt.

It was Shagrath, Silenoz and Galder that held the crowd in the palms of their hands, but it was the energy of Daray, Gerlioz and Brandt that provided them the platform with which to do so. Each song was delivered in a momentous, powerful manner. The tracks from Eonian shone in a way that will prompt this reviewer to return and reevaluate that album with a fresh outlook; it is indeed commendable that they slotted in naturally, alongside a smattering of latter-day Dimmu Borgir classics. Particular highlights were the duo of ‘The Chosen Legacy’ and ‘The Serpentine Offering’ drawn back to back from 2007’s In Sorte Diaboli, as well as the pair of tracks selected from Puritanical Euphoric Misanthropia, and a rousing rendition of ‘Progenies of the Great Apocalypse’ from Death Cult Armageddon. 1997’s ‘Mourning Palace’, the opening track from the classic Enthrone Darkness Triumphant provided the final encore, but at the same time it also offered a glimpse at what might have been. While the band, as above, performed the material that perhaps best highlighted their strengths as individuals and as a unit, ‘Mourning Palace’ was absolutely thunderous; and prompted some thought about what this lineup might have been able to do if they had chosen to take the opportunity to play more of their earlier catalogue.

Either way, Dimmu Borgir performed admirably, before an immensely appreciative crowd. Like Earth Rot, they too no doubt felt the benefit of a successful tour, and put everything they had into the performance. Their lightshow and use of smoke accentuated their performance, no doubt aiding in captivating the rapturous throng before them. I must also make mention again of the sound. While it may be down to (I assume) the band having a dedicated sound mixer, I found it quite clear to hear everything; I particularly appreciated just how easy it was to pick up Gerlioz’ keyboards and synths. Over the years I’ve found it easy for keys/synth to be unintentionally buried amid layers of guitar and drums, but last night it was mixed as a featured instrument, and the performance was all the better for it; easily replicating the many textures evident on the albums these songs were drawn from.

It has been seven years since they have performed here, yet it seems like they have only grown as a unit in that time. Hopefully it will not be another seven years before they return to our shores, but I’m sure whenever they see fit to return, it will be before a crowd as appreciative as that at The Metro.