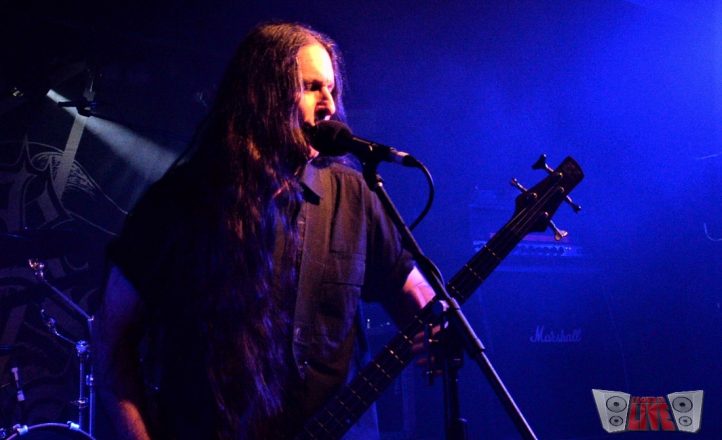 It was a cool September night that saw the occurrence of the Sydney iteration of the third Direct Underground festival. Taking place at Leichhardt’s Crowbar, the air was thick with anticipation for the night’s activities.

First up, to a steadily increasing crowd, was Melbourne’s Reaper. Playing a violent, crust influenced blend of black/thrash, they had recently expanded their lineup, adding second guitarist Adam. As such, Direct Underground proved to be something of a baptism of fire for the newly minted quintet, and they were most certainly on fire. Performing tracks from their 2017 demo, and if I’m not mistaken, a few new ones. Their set certainly went down well and set the tone for the action to come.

Next was South Australia’s Christ Dismembered. It was refreshing and heartening to see younger musicians carrying on the older spirit of black metal. I feel that this energised their set, comprised of tracks from their self-titled album, and their newer single ‘Spit Forth Your Lies’. Vocalist/guitarist NecroSatan had a commanding stage presence, which carried over to the rest of the band. Their album tracks translated very well to the live setting, and I look forward to seeing what the future holds for Christ Dismembered; if they keep forging the same path it should be a bright one.

Next up, midway through the proceeding were reactivated Melbourne death metal legends Abramelin. Firing on all cylinders since their 2016 resurrection, Abramelin delivered their classic material with aplomb, along with new material from their yet to be released Not Enough Snuff (projected for release in early 2020, currently being mastered by Dan Swanö). The new material was, in some ways, the highlight of their set. It was amazing to hear the classics like ‘Human Abattoir’ and ‘Spiritual Justice’, but the new material fit in so well that it bodes for Abramelin releasing a killer album in 2020. Classic members Simon Dower, Rob Mollica, Tim Aldridge and Matt Wilcock were ably bolstered by drumming legend Dave Haley clearly enjoyed their time on the stage; and the appreciative, growing audience did so as well.

A quick changeover ensued, and Immolation, the first of the night’s two co-headliners took to the stage. Performing a career spanning set, heavy on early favourites like the title track and ‘Into Everlasting Fire’ from their immense 1991 debut Dawn of Possession, through to newer material like 2013’s ‘Kingdom of Conspiracy’ and a slew of cuts drawn from 2017’s Atonement, including the title track. Immolation displayed stellar musicianship, including some great guitar interplay between Robert Vigna and Alex Bouks, thunderous bass lines and vocals from Ross Dolan and pounding drums from Steve Shalaty. Immolation kept the on stage banter to a minimum, but they clearly showed their appreciation for a reciprocal Sydney crowd.

Culminating the night’s festivities were co-headliners, Swedish black metal juggernauts Dark Funeral. After another quick changeover, the curtain dropped and the sold out crowd was treated to a display of black metal ferocity. Touring their 2016 opus Where Shadows Forever Reign, on their third tour of Australia, they clearly had the triumphant performances of visits past in mind as they delivered a powerful performance which drew upon material from their 1996 debut The Secrets of the Black Arts up to the aforementioned Shadows album. Band stalwart Lord Ahriman displayed his talent for assembling solid line-ups around him. Long-term members Chaq Mol and Heljarmadr proved their skills while newer recruits Adra-Melek and Jalomaah showed that they had already gelled as a rhythm section, providing the band with a rock solid foundation. This lineup is a cohesive unit, and they turned their hand to tracks from Dark Funeral’s discography with equal finesse, clearly impressing the eager Sydney punters. Such a powerful, concise set meant one thing though: it felt like it was over too quickly, but this was not a negative, given the performances by each of the prior bands.

The Sydney leg of the third iteration of Direct Underground Festival was a complete success. Soundworks Direct were able to bring together a varied bill that showcased some of the best up and coming and established Australian and international talent. Additionally, that each iteration of this festival having taken place in a different venue has given each of them their own distinct atmosphere. Both of those achievements are no easy feat, and I think this was reflected in both the professionalism of the crew and venue, and the immense appreciation of the punters in the crowd.

2019 brought to Sydney another great Direct Underground fest, I look forward to the surprise that await us in 2020.