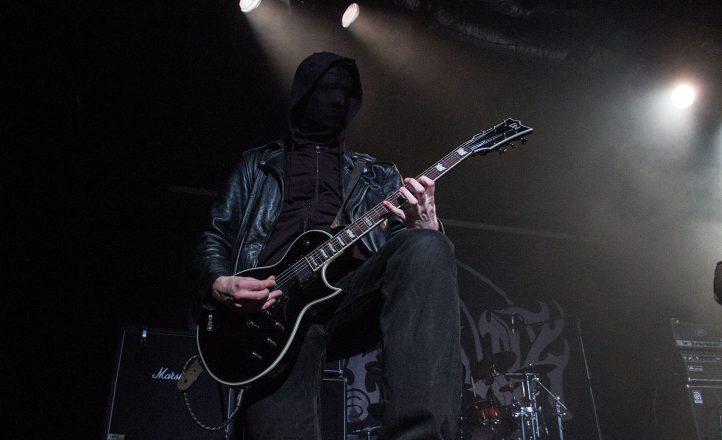 Friday evening saw the advent of the Sydney leg of the first Direct Underground festival. Intended by the promoters as a celebration of their fifth anniversary, they threw one hell of a party to celebrate, inviting bands they’ve worked with and bands they’ve wanted to work with to take part.

The bands chosen to be here were Tasmania’s own Départe, New Zealand’s Ulcerate, Mgla from Poland, Canada’s Gorguts and Swedish black metal legends Marduk. Five renowned bands spanning continents. Disparate subgenres of metal. A vast array of talent.  All that was left was to settle into the night and watch the bill come to life.

First up was Départe. Felt by many to have taken the metal world by storm with their debut full-length Failure, Subside, I had previously heard their brand of metal on said full length, and while at the time I had felt that they had vast potential, the album also had its share of kinks that needed to be ironed out. Still, an enjoyable listen, so I was keen to see how their atmospheric brand of post-black/death metal would fare in the live arena.

I arrived just as they began their set, consisting of tracks from Failure, Subside. Possessive of that same dissonance, chilling noise and whirling maelstroms of heartfelt black/death metal as their studio counterparts, their music went over well. Achieving that same atmosphere of unending torment would not have been an easy feat, but Départe succeeded in that regard. Furious, lumbering passages paired with pained vocals, they might have seemed an interesting choice to begin the festivities, but the crowd began amassing as they performed. Having now seen them live I feel I’ve gained a new appreciation for them and look forward to seeing what their future brings.

Next up were Auckland, New Zealand’s leading purveyors of technical death metal, Ulcerate. Direct Underground was the first time I’d seen them in a few years, so I was interested to see how they’d evolved their live act. I’ve always enjoyed their brand of metal, because they’ve always carefully added these little touches that set them apart from the often unrelenting blasts of mayhem that technical death can become. That brand of carefully established song writing and heavy injections of atmosphere served them well in the live arena. From where I stood, the crowd lapped up their performance. Their song writing, lyrics, and live performances have all matured and I think this reflects on them both as musicians and performers.

Continuing the night were Poland’s Mgla, who certainly brought along a cold, harsh style of black metal that the crowd also showed much appreciation for. Their sound and approach proved a good foil for the preceding acts. Their set list, consisting of tracks from each their albums, showed how much this band has honed their craft over the years. With that said, they knew how to captivate the crowd. Their image (hooded band members and minimal to no stage banter) certainly added to this, as it just let Mgla focus on delivering song after song. And it allowed the crowd to simply get lost in the fog and enjoy.

Canadian death metal stalwarts Gorguts next took the stage, with guitarist/vocalist Luc Lemay addressed the crowd at several points in the night, seemingly revelling in how good it was to be back here and among such a talented line up of bands and an appreciative crowd. Their set illustrated the synergy the renewed band displayed on stage, comprised of tracks from Obscura, Colored Sands and the entirety of 2016’s Pleiades’ Dust. An ambitious move, but one that paid off. Lemay was a commanding presence onstage and showed why Gorguts remain such a force. Guitarist Hufnagel and bassist Marston showed incredible technical skill, displaying that near-telepathic connection that they’ve honed from years of playing together. Drummer Hamelin demonstrated ably why he’s such a renowned name in metal. His solid playing provided the perfect technical counterpoint to the interplay between Lemay, Marston and Hufnagel , highlighting the unorthodox approach that has long served Gorguts well. After thanking the crowd again and launching into the title track from the immense Obscura, Gorguts’ part in the celebration had come to an end. I would have enjoyed a longer set, but I was also equally anticipating Marduk.

Having been promoted as performing the vaunted Heaven Shall Burn…When We Are Gathered opus in its entirety, Marduk soon appeared onstage and launched into ‘Beyond the Grace of God’, ripping through the album. This was a highlight of the night, personally, as Marduk circa 2017 ably recreated that seminal album’s atmosphere, bringing it to life once more. The breakneck run through of the album was highlighted in tracks like ‘Infernal Eternal’ with its mesmerising guitar lines, and the unbelievably fast tempo of ‘Darkness it Shall Be’, the assault of ‘The Black Tormentor of Satan’ and the more measured pace of ‘Dracul Va Domni Din Nou in Transilvania’, allowing the band to slow the pace and evoke a different atmosphere.

After concluding Heaven Shall Burn, Marduk equally placed one foot in the present, and the other in the past. ‘Wolves’ from Those of the Unlight and ‘Still Fucking Dead’ sitting comfortably alongside ‘The Blond Beast’ and the title track from 2015’s Frontschwein. Marduk capped off proceedings with ‘Panzer Division Marduk’ and with that, the Sydney leg of Direct Underground came come to an end; the crowd dispersing into the rainy night.

It may have been Direct Touring’s anniversary, but for the faithful who braved the unpredictable weather, with such a great line up, there was equal reason to celebrate. Hats off to Direct Touring for pulling out all the stops.