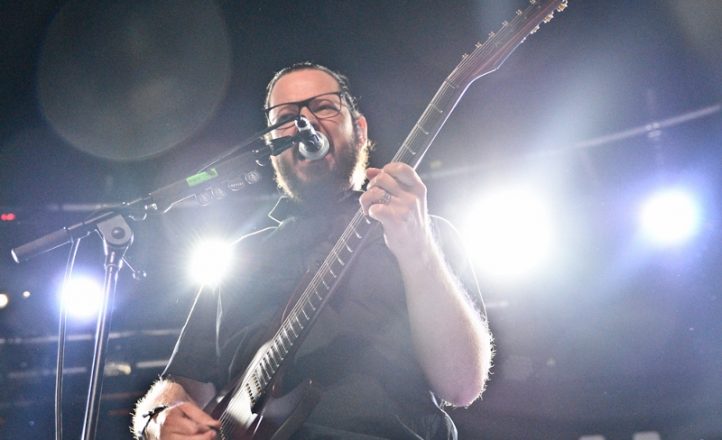 The 5th of May brought with it the Sydney leg of the 2018 iteration of Direct Underground. Held in celebration of Direct Touring’s tenure of putting together some of the best packages Australia has seen, the 2017 debut was well regarded and heavily attended. Did the 2018 edition, which had a similarly diverse bill, feel much the same? This reviewer was there to find out.

Melbourne’s post-metal titans Encircling Sea kicked proceedings off. I must admit that, at first, their inclusion stood out among the rest of the bill. Yet by the time I arrived at the venue, and they started their set, my concerns had been allayed. Their brand of post-metal is all-encompassing; comprising influences from different subgenres, they soon had the burgeoning crowd in the palm of their hand. Their setlist spanned tracks across their discography, including their latest album, April’s Hearken. They had an immense, crushing sound, particularly amazing given that they performed as a trio. To experience Encircling Sea live, you soon gain an insight as to why that is their chosen moniker. Even some fledgling issues with the live sound mix couldn’t dampen their set.

Belgium’s Wiegedood were next. Hailing from Flanders, the Dutch-speaking part of Belgium, the trio have a unique atmosphere all their own. They understand atmosphere, and have a clear focus as to how they want their vision to sound. Their vision is that of death, pain, and the feeling that they provoke. This punishing, oppressive atmosphere carries over to the live show. Their set, comprising of tracks from their three albums, was heavy and intense. Low tunings, melancholic melodies and an epic, sweeping sound all blended together to create something unique. Wiegedood seemed to be a clear crowd favourite, even though they too were hampered by the same sound issues that plagued Encircling Sea (at least from where I stood).

New Zealand’s own Doom Cult, Diocletian returned to our shores after nigh on eight years. They quickly set up and began their assault. Their blistering brand of apocalyptic black/death metal proved to be an engaging one. The intensity the set delivered definitely made up for the extended delay in trans-Tasman visits. The setlist included favourites like ‘Antichrist Hammerfist’ from 2009’s punishing debut Doom Cult, as well as some new material that will appear on their forthcoming album. The fluidity in Diocletian’s set saw these newer tracks slotting seamlessly alongside their battle-tested anthems. The performance went over well, with R.W.’s deep bass runs being a clear highlight. At this point in the night, the sound mix issues began to even out and Diocletian’s vocals could be clearly heard.

Boston, Massachusetts’ Revocation had the next slot, and used the time to bring their technical death/thrash to the waiting audience. Their set was comprised of tracks from their two latest full length albums, Deathless and Great is Our Sin. The tracks meshed well together, displaying the band’s compositional abilities and technical skill. Guitarist/vocalists David Davidson and Dan Gargiulo were a highlight. Playing off each other, and complementing each other both vocally and with guitar interplay; each song became more technical than the last. What I found to be true about Revocation is that they used their technicality to accentuate the songs, rather than dominate them. Their focus was still on pleasing the crowd, and they were rewarded for that in spades.

Austria’s black/death metal maelstrom Belphegor soon took the stage. It was clear from the interval/set-up period that the air was thick with anticipation for their first visit to Sydney. Apparently they were not able to bring all of their onstage arsenal with them, but what they did bring certainly made for an impressive sight and atmosphere.  Belphegor are certainly masters of their craft, the crowd ate up each song and was left ravenous for more. With their onstage atmosphere as previously mentioned, Belphegor made for an impressive force on stage and their performance, too, was impressive. Everything was in sync to the tiniest detail and their immense live ritual provided a nice contrast to Revocation who preceded them. Belphegor had a really deep and clear sound; it was pleasing to see that the mix had struck a solid balance and every detail was discernible.

Ihsahn, famed vocalist/guitarist of seminal black metal band Emperor was the headliner of the night. A quick change in gear and backdrop and he and his band soon took to the stage. With choice selections from his solo discography, a few cuts from his ‘boy band’ Emperor were thrown in for good measure. Tracks like the rousing, classic metal-inspired ‘Until I Too Dissolve’ and ‘Mass Darkness’ (co-written with Trivium’s Matt Heafy) fit neatly alongside classics from that ‘boy band’, ‘Thus Spake the Nightspirit’, ‘I am the Black Wizards’ and ‘Inno A Satana’.

I applaud Ihsahn’s decision to structure his setlist thusly. He could have walked onstage and played nothing but Emperor classics, which would also have satiated the audience. Yet his solo career too has received critical acclaim, and the tracks he chose provided highlights and opportunities for his band to gel and bounce off each other; additionally, they treated the Emperor cuts with the reverence they deserve. As with Belphegor, the sound problems had been corrected. Ihsahn’s vocals were clear, and the eight string guitars resonated deep into the venue. As good as Belphegor’s performance was, Ihsahn’s offering clearly proved why he was headlining. It was as if he’d been here multiple times, treading familiar ground; as opposed to it being his first visit, solo or otherwise.

As a whole, Direct Underground 2018 was similar to its predecessor in that it effortlessly weaved together bands of disparate subgenres to create a unique and memorable experience. Each band was at the top of the game; it was hard to find fault to that end. Personal highlights were the commanding performances from both Wiegedood, and Ihsahn, though it was easy to see why the audience were so ravenous for more from Belphegor. Throughout this review, I’d made mention of issues with the sound at Max Watts’. It wasn’t the first time I’d heard somewhat patchy sound there, and the fact that it seems to happen repeatedly leads me to believe that it needs to be corrected. That notwithstanding, Direct Underground 2018 delivered on all levels. I look forward to seeing what is unleashed in 2019.