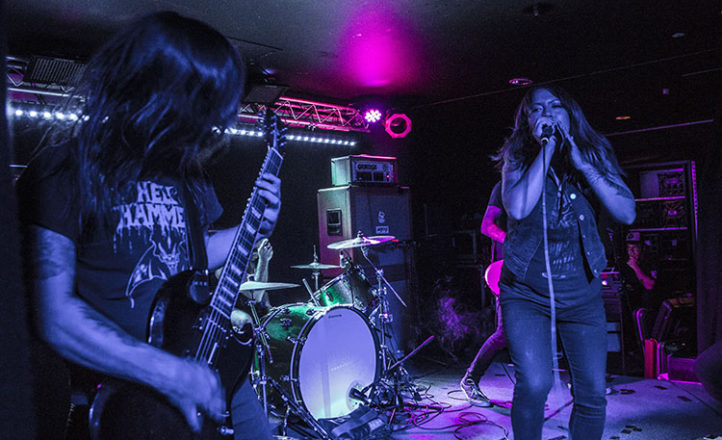 Australia’s premier doom fest returned to Hermanns for its sixth instalment. Australian doom fanatics collectively and understandably lost their shit when the mighty Windhand were announced as this year’s headliner along with New Zealand’s much-hyped Beastwars.

Kicking off the night without any fanfare or pomposity, Witchskull playing their first gig in Sydney town dove straight into a set of hard driving kyussy (yes it’s a word now) stoner rock full of groove, fuzz and reverb. Singer and guitarist Pasquale fronted up to the mic again only a few weeks since the crushing gig with his other band Looking Glass at the very same venue and proceeded to outdo himself with the immense riffage and soloing. Full credit to the bassist who managed to snap a number of strings due to the absolute ferocity of his playing on the last song.

Next up were doom and sludge veterans Summonus, a perfect fit for the festival, who proceeded to unleash a number of tunes from their only full length, Zeichen Der Hexe like ‘Embodiment’ and ‘Black Sun Dying’ to an appreciative audience growing in size and enthusiasm. A new song was played, so new in fact singer Rod Hunt, was singing from a strategically placed lyric sheet on the floor. The Argento inspired ‘Deep Red’ put an end to a great set by the local legends.

After a short sound check, Beastwars took to the stage led by their charismatic singer Matt Hyde or as I and presumably a few others like to know him as, the Ice King from Adventure Time. A large group of supporters made their way to the front of the filled room, lapping up every chunky riff and meaty hook from the Wellington four piece. ‘Damn the Sky’ was the finisher to a very impressive set by the co-headliners, delighting their horde of supporters and winning even more fans.

Windhand are a force of nature. I don’t really know how else to describe them after a absolutely brutalising set filled mostly by ear drum destroying doom from last year’s standout sophomore record, Soma alongside a new track, ‘Forest Clouds’. It was down-tuned Sabbath-inspired doom at its very loudest, led by the syrupy vocals of Dorthia Cottrell laying waste to every single audience member, reducing some to their knees and others having to cover their ears or beg for ear protection, such was the extreme volume emanating from the sound system.

Doomsday Fest can do no wrong. It truly is turning into a bucket list festival for Australian doom fans. Cough? Check. Church of Misery? Also check. Yob and Pallbearer next year, please?