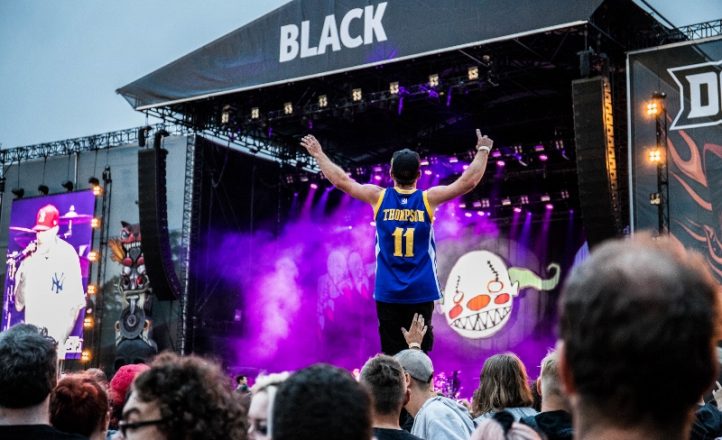 The demise of Soundwave and Big Day Out left a huge void for the Australian metal and rock community that for years had been accustomed to being utterly exhilarated in the sweaty mosh pits of world-class heavy music festivals. This void however was filled by the exciting announcement that the Download Festival was coming to Melbourne’s Flemington Racecourse for its 2018 inaugural debut.

Melbourne’s weather prediction of scattered showers didn’t stop the legions of fans from storming into Flemington, making their presence known and feeling right at home. As I arrived at the gates, it felt like a heavy metal Disneyland with signing tents, band merch tables, an inflatable cathedral with a DJ playing extreme metal inside for all to worship at, food stalls, beer gardens, four stages to watch bands perform all day long and pictures of the official festival mascot, the iconic Download dog everywhere!

The Red and The Black stages were the two places to see the headline acts on the bill but for dedicated punk and hardcore enthusiasts – The Avalanche Stage catered solely to them whilst The Dogtooth Stage provided extreme metal heads an exclusive place for them to gather. The sight of a man on a wheelchair crowd surfing during Amon Amarth’s menacing performance and singer Johan Hegg yelling “That’s metal as fuck!” was something to cherish as well as Gojira making the festival hot as hell with their blasting stage pyrotechnics.

A faithful crowd created a large circle pit and swirled around frantically during Mastodon’s closing song “Blood and Thunder”. In contrast Good Charlotte made everyone sing along to their pubescent hit songs “The Anthem” and “Girls & Boys”.

Limp Bizkit’s performance saw front man Fred Durst (with his infamous red cap and now a white beard) invite a fan on stage to sing their George Michael cover “Faith” and he jumped into the crowd on more than one occasion. In typical defiance, Durst also announced the band were not allowed to play “Break Stuff” but still went ahead and played it. Prophets of Rage brought mayhem to the mosh pit with rebellious rock anthems “Bulls on Parade” and “Killing In the Name” whilst at the same time giving the audience a revolutionary message including guitarist Tom Morello shredding with his teeth and showing a “Fuck Trump” sign on the back of his instrument. Korn delivered with their usual angst and tormented driven metallic jams and the large crowd surrounding the Black Stage got a chance to hear new material alongside their 90’s classic compositions “Blind”, “Got the Life” and “Freak on The Leash”. As the headline act they gave the crowd a final send off to what was an electrifying and fun day.

The festival’s security guards, sound engineers and support staff that worked tirelessly behind the scenes all helped in contributing to a safe and successful opening debut festival and it couldn’t have been done without them. The response to the first ever Australian Download Festival was, to say the least, very positive with the logistics and services of the event running smoothly alongside some world class bands and a well behaved crowd all making it a memorable outing. Download Festival programmer Nigel Melder confirmed it would all be happening again next year in Melbourne and much to the visiting fans liking, the festival will also make its Sydney debut. What remains to be seen is whether each year they’ll have another veteran headline act or if they can find exciting up and coming bands that will be ready to headline one of the biggest metal and rock festivals on the planet.