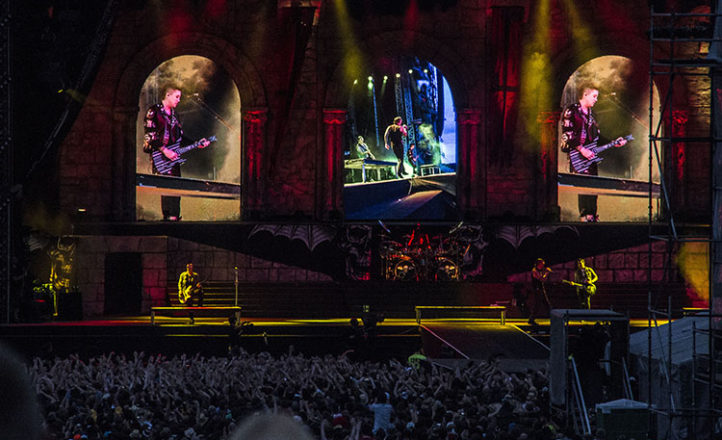 It is midnight Thursday and I am standing in a field setting up a tent. Why? you ask. Because camping with tens of thousands of people is the only way to experience England’s Download festival. Three days of alcohol, mud and music. As I missed my train from Birmingham that afternoon, I am now setting up my tent in darkness.

After a whole lot of swearing and a few hours sleep, I was up and about checking out my surroundings. A sea of tents stretched forever. After some breakfast beers and some breakfast food, I wandered over to the arena. And by wandered I mean it took 20 minutes of solid marching to get there from the campsite. Once inside the arena, I grabbed a pint of cider, as it was the coldest beverage served and made my way to the main stage to catch Powerman 5000. The arena is set up like a giant amphitheatre, so no matter where you stood you could see the stage. People were sprawled out on picnic blankets, drinking pints and screaming along to “Drop the Bombshell”, frontman Spider One sneering and spitting like Billy Idol. The crowd loved the early morning racket.

After Powerman 5000, English upstarts Skindred – who were recently in Australia for Soundwave – had tens of thousands of punters clapping and cheering along. Playing a few tracks off their new album Kill The Power, the quartet then turned it up with a surprise Harlem Shake and Newport Helicopter, which saw ten thousand people waving the shirts in the air. They closed with “Warning Warning” and a monstrous mosh pit.

The first of two Australian acts on the mega bill were The Amity Affliction, who tore up the stage in true Aussie style. A solid mix of new and old tracks including new single “Pittsburgh” and closing anthem “Open Letter”. Back on the main stage Zakk Wylde’s Black Label Society were decimating ears with a humongous stack of Marshall amps. The sound quality was perfect and the natural amphitheatre on which the main stage was placed meant that no matter where you stood, that guitar tone pulsated in your chest. The biggest crowd reaction went to “The River”, a massive song with a massive amount of crowd vocals.

Royal Blood, the English two piece making waves on Triple J right now ripped up the side stage. Short, fast and loud, “Little Monster” and “Out of the Black” had the tent completely overflowing. Back on the main stage, symphonic power metal outfit Within Temptation were trying to burn the stage down with a monster production of fire and flames. Frontwoman Sharon den Adel prowled the stage and walkway with a huge presence and amazing vocal range, as well as looking mighty fine in tight black leather.

In stark contrast, Irish bastards Flogging Molly were in full swing as the crowd danced a jolly jig, the usual circle pit was a rag tag circle of linked arms and hearty cheers as the seven piece played. Crowd favourites “Devil’s Dance Floor” and “Drunken Lullabies” garnered the largest response from the cheering, drunken crowd. Back to the main stage for the master of shock horror Rob Zombie as he blasted into “Dragula”. The crowd lapped it up. The set was still very much like that on the Soundwave festival, only with tens of thousands of punters flocking to the front. Zombie even found himself a sex doll, thrown onstage, to parade around with.

A few pints of warm English beer later and I was ready for some good fashioned punk rock from LA’s Bad Religion. After three decades playing stages, the band have never sounded better. They were on fire with Greg Graffin leading the charge, closing with “Sorrow” and the anthemic “American Jesus”.

Main stage tonight was headlined by Avenged Sevenfold, despite their latest album sounding a whole lot like a bad Metallica, the crowd for the quintet was immense. Playing a collection of tracks spanning their catalogue, it was older tracks like “Beast and the Harlot”, “Bat Country” and “Second Heartbeat” that drew the largest response. A much longer then necessary guitar solo from Synyster Gates, including a version of “God Save the Queen”, gave the crowd a rest before first encore of “Seize the Day” followed up with crowd favourite and closer “Unholy Confessions” rounded out the headline set with a huge pyrotechnics display. Despite this, the night wasn’t yet done as I took off to catch The Offspring play Smash in its entirety.

If you haven’t heard Smash then get out from under your rock as hearing the album live cannot compare. Dexter Holland and Noodles were on fire. This was the finest showing of The Offspring I have witnessed. The audience sang along to every line, almost drowning out the band themselves. Walking off to the sounds of “Intermission” the band then returned to play an encore consisting of their finest singles, “All I Want”, “Can’t Get My Head Around You, “Pretty Fly” and it wouldn’t be England without an immense downpour of rain during set ender “The Kids Aren’t Alright”. I walked away with a grin from ear to ear and attempted to find my tent.

Day two was unusually warm for England, so much so that later that day I would come across countless sunburnt Brits. Gearing up early I made the arduous trek to the arena to catch the heaviest band on the bill, Dying Fetus. The blast beats could be heard all the way back at the campsite, and to say they destroyed would be an understatement. The few thousand who had gathered early had a circle pit well underway and the three piece demolished the stage.

Afterward, I headed back to the tent for a bit more of a rest from the heat and a few pints of cider. Following a kip, I went back in for the long stay and caught rockers Chevelle who were playing a set mostly of new tracks. Over at the main stage, I laid out on the grass to listen to the generic metalcore stylings of While She Sleeps. I may have fallen asleep during their set, but what I did catch was a set of very similar metalcore breakdowns, choreographed stage moves and bass drops.

Having missed them in Australia, I was eager to catch pop punkers Bowling For Soup, and I was not disappointed. What ensued for 45 minutes was a show filled with pop rock, a knight slaying an inflated sheep, jokes made at the expense of Killswitch Engage, a pause for the perfect photo op and also to get two punters dressed as Big Bird to find each other in the crowd and dance. They closed with “1985” and the enormous crowd waving their hands.

For a complete change of pace, a double whammy of stoner rock in Orange Goblin and Monster Magnet on the side stage. The dope smoke was thick in these parts as OG laid down some immense doom riffs. Straight after, Monster Magnet took the stage, an energetic looking Dave Wyndorf fronted and let forth a hail of thick, stoner riffs, the air still smelling strongly of weed.

As I wandered past main stage to the bar, youngsters Bring Me the Horizon were in full swing. There were no flares thrown but the calls to “fuck shit up” were a constant from front man Ollie Sykes. Showered in confetti, the stage and audience alike all jumped as one to favourites “Chelsea Smile” and the anthem that is “Sleepwalker”.

Having missed Anathema early that day, I was lucky to catch their intimate acoustic performance at the small stage in the bar area. Armed with two acoustic guitars, a violin and some harmonies, the band played a number of stripped back tracks from across their catalogue. Intimate and amazing. To the main stage again, this time to catch Fall Out Boy, where I was surprised to find that they were a lot more rocking than the pop singles on constant rotation on top forty radio. “I Slept With Someone…”, “This Ain’t a Scene…” and a rock n roll cover of “Beat It” had my feet tapping. But enough of that, it was back up the hill to the Pepsi stage to get my rock n’ roll fill from the one and only Twisted Sister, who played an extended version of “We’re Not Gonna Take It” just to make sure that the fans watching Fall Out Boy knew what they were missing. “I Wanna Rock” rocked the arena as Dee Snider ran amok on stage. An encore of Motörhead’s “Born To Raise Hell” was recorded and sent to the legend that is Lemmy as a Get Well Soon card.

Due to the World Cup game being shown, old school rockers Status Quo played their set much earlier, and what a set. After decades on the scene, the band can still hold their own against any of the bands today.

Headlining day two were none other than Linkin Park. Normally this wouldn’t be special but tonight they were playing Hybrid Theory in its entirety. The thirteen year old me was ecstatic as I rapped along to every line. “One Step Closer”, “Crawling”, “In The End” – every song was sung by the crowd, attempting to drown out Mike Shinoda and Chester Bennington. As luck would have it, they began the second half of the set, the new songs half, right as the recently reformed Sikth took the side stage.

Despite being the biggest band on the smallest stage, the nu metallers ripped right into it with the entire tent erupting in a seething mass of bodies. This was something epic, I hope to see them in Australia soon and with that day two was done. The long walk back to camp is a dreaded one, but must be done.

Day three started like the others, only this time I felt broken. The rock and beers were catching up, and the festival food and carnival rides didn’t help either. It was this morning that I joined up with a camp of rowdy English folk for a dozen pints and some laughs. Consequently I missed a bunch of bands throughout the day, and as the sun doesn’t go down until after ten, track of time was lost.

Realising my mistake I raced in to catch The Dillinger Escape Plan take the stage and destroy it. “Sunshine the Werewolf”, “One of Us is the Killer”, “Farewell, Mona Lisa” and the bombastic “Panasonic Youth” tore up the tent. Greg Puciato spent more time in the crowd then onstage, screaming lyrics between high energy theatrics. It was at this point I may have been too eager to get in the thick of it as the crowd surge collapsed, my sunglasses were snapped and I ended up with the weight of several people on me. Nonetheless, I got up and kept going til the end.

After that thrashing it was off to main stage for the final band and best headline of the weekend – Aerosmith. All the favourites plus a few more were on show: “Janie’s Got A Gun”, “I Don’t Wanna Miss A Thing, “Dude Looks Like A Lady” and their rocking cover of “Come Together” were all rounded out with “Walk This Way”. The first encore of “Dream On” saw Steven Tyler’s piano surrounded by smoke and confetti as guitarist Joe Perry shredded from on top of the piano. Second encore and set closer “Mama Kin” was a dazzling display of America’s greatest rock band, a band who after 44 years are still on top of their game.

Once more I returned to my tent, happy in the fact I wouldn’t have to walk the two kay trek any more, but sad to see it over.