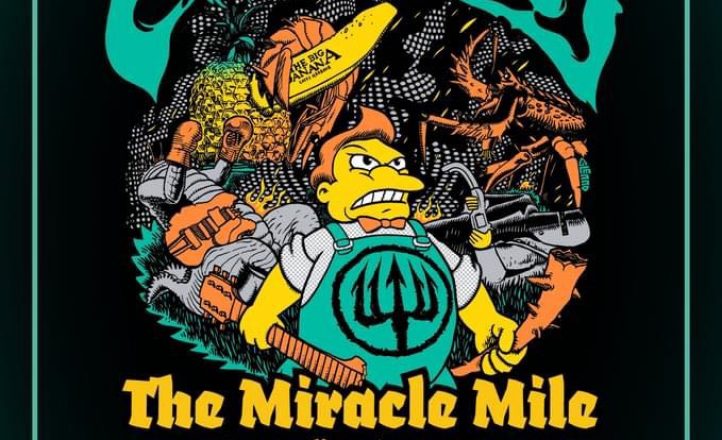 What better way to warm up on a cold Saturday evening in Sydney than to cram into the front bar of a pub and watch Australia’s best Simpsons-themed doom band?

The answer for some is probably “any number of things” but that would have meant missing out on a couple of great bands. Local punks Tantichrist obviously thought that a 9pm start for a gig with only two acts on was too early so they came on about 20 minutes late. With a ten song set list that lasted barely half an hour, though, this didn’t push things back too much.

Tantichrist was a  high energy explosion of gnarly punk rock laced with social commentary and songs called Thoughts and Prayers, Sad Boys (about incels) and Frackenstein. The singer is a complete maniac, cavorting into the crowd, splashing beer around wildly from a seemingly endless rider drawn from an ice chest at the front of the “stage” and at one point dropping the mic to the ground and not being able to find it again. Not that it mattered too much as the Duke’s vocal PA is woefully inadequate and the singing was mostly drowned out by the band, but it was still funny. The stampeding, off-the-chain version of Ghost Riders in the Sky was insanity.

By the time Dr Colossus came on, the front bar of the Duke was at bursting point with almost no way for anyone to get past anyone else. Draped in their Stonecutters costumes, the Melbourne lads tore into Pickabar as an opener and it was hearty riffs and insidiously catchy grooves from that moment. Lard Lad rolled out next in a wave of comedic destruction and then came the Clutch-tinged So Long Stinktown – dedicated to Melbourne – as the crowd swayed and sang along. Again, the vocal PA was barely audible and frontman Jono was having all kinds of issues with his guitar rig but the band let nothing stand in their way, even when one of the foldback wedges began blowing smoke, possibly from having too much beer thrown over it earlier in the evening. In the end the set list was discarded when they decided to play a request from a fan who’d come down from the Central Coast to see them and the encore was a singalong of It’s Still Good with a bunch of randos from the crowd sharing the mic around while the stage descended into flailing limbs and guitars, especially from Dr Love who threw his bass about his head for about the 20th time.

After being forced to hold off on a Sydney visit for such a long time, it was nothing short of Excellent! to see Dr Colossus at last. A fun time was had by all.