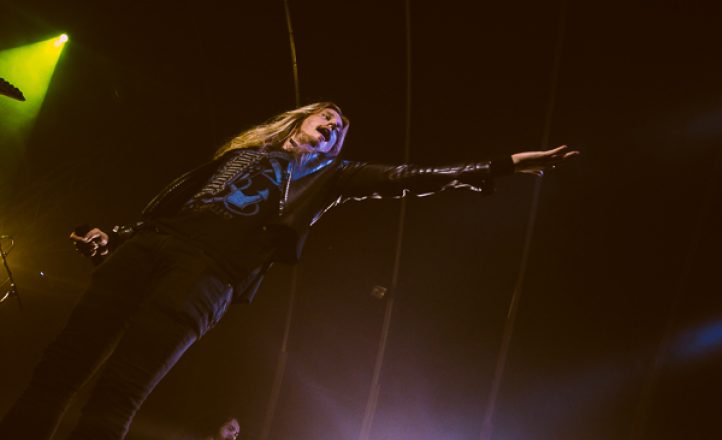 DragonForce are renowned for putting on a live show that takes their over the top, hyperfast musicianship up a notch with tongue in cheek antics. Tonight’s show is part of a headlining tour which hasn’t been the case in almost a decade due to festival appearances and associated side show support slots. However, this gig saw them in fine form as they kicked off their international tour in support of their latest album Reaching Into Infinity. The venue was well attended with lines of punters sprawled in both directions along the footpath before merging to the entrance of the architectural grandeur of the Sydney University’s Manning Bar doors.

Once inside, it wasn’t long before locals Lord had the formidable task of warming up a crowd intent on witnessing more notes per minute than your average neo-classical shredfest. Given their experience and ability with supporting international artists as well as having some serious musicianship skills, they managed the task with utmost success. Guitar solo trade-offs and harmony riffs were in full effect from the opening song onwards. As their set progressed into heavier material, the guitar parts shared between front man Lord Tim and co-lead guitarist Mark Furtner lost none of their clarity and confidence even as the material increased in intensity. Their drummer smashed away dutifully on his kit, perched to the left of the stage given DragonForce’s huge drum kit and associated riser took up a fair chunk of stage space.

Promotional t-shirts were thrown out to the audience at various times along with some comical banter. The classic track ‘Steelheart’, introduced with some vocal call and response gymnastics, continued with the harmony lead parts alongside some fast guitar playing during solos including tapping, sweep picking, sliding taps, speed runs galore and theatrical squealing whammy bar harmonics. Essentially, guitar techniques that DragonForce also employ in abundance but with a more theatrical approach. Songs about sea shanties with some neo-classical styled guitar soloing and sing-alongs ensued. The title track from their Set in Stone album ripped along at a galloping pace followed by the fiery ‘Footsteps in the Sand’ from the A Personal Journey album. Throughout their set, bassist Andrew Dowling moved around the stage whilst retaining precision with his fast picking. He also added the odd bit of comic relief such as when his microphone stand dropped to knee height and he soldiered on to crouch during his vocal parts during the very Dokken inspired ‘Through the Fire’ from Ascendence. Their Blistering 50 minute set was completed with a cover of Metallica’s classic ‘Creeping Death’ with Mark taking the lead vocals. Lord’s undeniable musicianship and sense of fun is infectious. Tonight Lord were very tight, playing to a full and responsive room.

As the headlining band stage set was prepared, the sound check process was done with military precision after the huge drum kit was unveiled and lights shone on the huge DragonForce backdrop. Not long after, the room filled up with any remaining stragglers, lights dimmed and on came the headliners, appearing on this tour as a five piece as keyboardist Vadim Pruzhanov is sitting out the current tour due to more pressing domestic responsibilities.

The opening title track from Reaching Into Infinity blasted over the PA as it soon became apparent that there were raised platforms at the foreground of the stage for mobile band members to jump up onto during the set. New album song ‘Ashes of the Dawn’ opened the set properly and saw guitar wizard Herman Li licking his guitar neck whilst letting fly some fiery guitar soloing. Guitar shredding partner in crime Sam Totman took a more casual approach as he ensured his beer was nestled securely in the microphone stand holder during his equally impressive guitar parts. The two guitarists set the tone of jovial one-upmanship by mimicking masturbatory activity as the other played their solo part before swapping for a slew of trade off sections in classics such as ‘Operation Ground and Pound’, when not offering rapid fire rhythm parts and solid backing vocals .

As the set list progressed it was clear their back catalogue was generally being covered fairly equally various new album tracks interspersed amongst the sonic bombast and embellished by pulsing light columns strobes that almost blinded punters temporarily. Classic songs like ‘Seasons’ and ‘Heroes of Our Time’ had crowd singalongs working within the impressive command of vocalist Marc Hudson. Meanwhile, Herman unleashed some whammy bar abuse, reverse whammy bar purrs and athleticism in jumping and kicking the back of his guitar to then catch it and land off the riser. Naturally, trade off guitar solos climaxed with dual lead harmony parts deftly played an octave apart. It also had some dynamic theatrics with both guitarists and bassist Frédéric Leclercq playing the speedy riffs overhand in unison. ‘Judgement Day’ from Reaching Into Infinity offered some of the heavier material being played tonight and had relatively new drummer Gee Anzalone attacking his drum kit with ferocity and precision.

Similarly, ‘Curse of Darkness’ summoned neoclassical guitar greats stylistically whereas ‘Three Hammers’ had elements of commercial pop dressed up as a power metal song. Sadly, the banter after this song descended into encouraging the exceptionally bogan behaviour of a punter drinking a beer from their shoe and endless expletives that was apparently hilarious to those with a limited vocabulary. ‘Fury of the Storm’ from Sonic Firestorm provided a return to form although the circle pit gorillas were out in force discovering how the laws of inertia worked. Onstage, it was relentless finger tapping passages, twin guitar harmonies and speedy double bass drumming throughout. After some fast guitar soloing, Sam took a moment to mock grabbing Marc’s nether regions during one of his high screams. The band left the stage as a reportedly hung-over Fred then put down his bass to return for a guitar solo section that was soon accompanied by Gee’s impressive drumming skills. It was initially call and response antics with a heavily processed guitar sound [stacks of reverb, delay and gain] that morphed into a keyboard wash assisted instrumental medley of gaming theme songs bookending a drum solo.

Thankfully, ‘Heart of a Dragon’ from the Valley of the Damned debut brought the full band back on with more super-fast trade off solos and hammering drumming. Still, the slightly tinny sounding early material against their next song; the epic track ‘The Edge of the World’ from the latest album, provided a developmental contrast. Welcome dynamics are rife in the song ranging from Herman’s comparatively reserved and tasteful playing to then letting rip on this signature seven stringed guitar and hearing Marc successfully pull off some death metal styled vocals live. It was certainly a gig highlight. Finishing the main set with ‘Cry Thunder’ from The Power Within contained an extended audience chorus sing along section and tour anecdotes of crowd comparisons whilst Gee kept the bass drum pumping along. The odd audience member’s vocal contributions were of varying quality, not surprisingly given the bar queues.

Encore time hit and more banter continued form bagging out Sam to questioning the validity of unsolicited after party promotions. The speed galloping cover of ‘Ring of Fire’ took the song and turned it on its head with bombast, more whammy bar squeals and powering drumming. The encore was ended with the over the top onslaught of ‘Through the Fire and Flames’, a suitable ending to a night of DragonForce. It even included an attempt of Herman to play the opening riff using Gee’s fidget spinner, to the amusement of all. As the band took their final bows an enthused post gig fan swarm remained to thank their heroes. At almost two hours of performance time for DragonForce, they put on a great, value for money show and they didn’t disappoint on their notes per minute count without it feeling like a shred guitar clinic. It was both an impressive and silly performance in equal measure yet undeniably very entertaining.