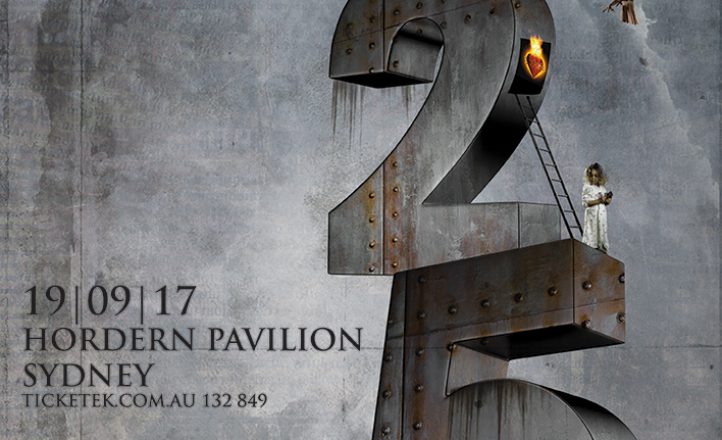 When Dream Theater’s Images and Words album began making waves in the music world twenty five years ago, acclaimed guitarist John Petrucci and cohorts were mocked by some in the grunge movement. They pressed on regardless of the jibes and have since outlived those naysayers. The longevity and stellar musicianship of Dream Theater is undeniable. It is also a rare treat for fans to experience a live performance that celebrates a pivotal album in full and one that broke through the crowded music market back in 1992 with a top ten single.

As lights dimmed, on came the band for Act One. The bearded, long haired Petrucci inhabited stage left in front of three large Mesa Boogie amplifier stacks. At stage right, bassist John Myung was also free to roam. Drummer Mike Mangini was atop a riser behind a mammoth drum kit that would compete with Rush’s Neil Peart for the amount of stacked on the riser. After the band hammered through the opening riff of ‘The Dark Eternal Night’ from Systematic Chaos, James LaBrie entered to plentiful applause.

The track quickly went into sections of almost free-jazz experimental time-signature bludgeoning that to some may have bordered on a sonic train crash but with Dream Theater in control, the Zappa-esque musical explosion returned to the  main riff of driving rock and veered back into the chorus. Impressive keyboard solos over the rhythm section and even a subsequent section including a keytar were cool but it was Petrucci’s ferocious climbing guitar solo to a crescendo peak chock full of chromatics on his 7 string that had audience attention.

‘The Bigger Picture’ from their self-titled album had a rising power ballad chorus and a slow, melodic solo. Soaring vocals and the vibrato therein demonstrated the technical delivery of LaBrie being spot on, even if his higher vocal register might be an acquired taste for some listeners. His vocals are clear, intelligible and powerful. The mind boggles as to how busy the guitar tech would be nightly for this band but the musos in the audience, who were plentiful, were clearly drooling over the various guitars on show. The instrumental ‘Hell’s Kitchen’ added some interesting percussion and a brooding feel as sure enough, another fast solo over an accelerating syncopated rhythm figure was followed by a rising guitar melody line.

Two songs from The Astonishing album were played next and offered less bombast initially. Myung remained on stage for a cover of the late Jaco Pastorius song Portrait of Tracy. It was an interesting piece and a change of pace, with gated or ringing bass notes and chiming harmonics flowing into smoother phrasing.

Fortunately, the respite from heavier material was short lived with ‘As I Am’ from the Train of Thought album being unleashed with conviction. The song’s subtle, slow start quickly morphed into a cranking, progressive metal opus with hypnotic rhythmic elements and a strong chorus. It was the highlight of the first set with incredible guitar soloing, dexterity, power and with the chorus of Metallica’s ‘Enter Sandman’ deftly snuck in. The guitar solo was preceded by a section of keyboards and guitar in unison with wide harmonics, then Petrucci shredding with abandon. It was a guitar lesson in incredible speed and executed with precision and agility. The athleticism of musicianship was also seen with Myung mirroring some of the guitar parts.

The final song of Act One was ‘Breaking All Illusions’. As keyboard and guitar trade-offs again merged into unison fast passage sections there were still some very progressive elements within the slower sections. The production of the show also had a hand in successfully delivering a walloping set. Pulsing spinning light arrays on either side of stage and vertical light curtains that curved about together with strobe effects enhanced a simple backdrop of cloth blocks changing colours as a result of lighting filters. There were no video screens or false amplifier baffles as seen on the last tour but the lighting rig was a crucial element tonight and showed that both band and production crew were very well rehearsed for every song.

The first hour was a hell of a musical ride so the band left the stage for twenty minutes to let everyone collect their thoughts before returning to run through the Images and Words album in its entirety with extended improvisational solo sections throughout. As such, Act Two was ushered in with a montage of well-known song snippets from around 1992 aired over the PA including a radio intro for ‘Pull Me Under’. The crowd were suitably appreciative when LaBrie encouraged everyone to stand up from their seats which continued for the ensuing ninety minute duration of Act Two. As a result, there was a greater sense of stage presence and more crowd and band interaction during the second set. Chemistry between band members appeared better too with more moments of Myung and Petrucci playing parts in close proximity when locking into the instrumental rhythm parts or the harmony parts of the songs whilst the vocalist would briefly wander offstage until his singing was again required.

‘Another Day’ brought the power ballad chorus sing-along with the crowd holding phones aloft like lighters whilst grand orchestral keyboard washes filled out the sound. A couple of guitar solos provided a selection of searing high notes with the second solo full of speed runs and sweep picking. ‘Take the Time’ took the powering rhythmic section between driving rock to a funk rock feel whilst Petrucci’s impressive solo touched on a neoclassical style.

Of all the songs played from the landmark album, ‘Take the Time’ was the musical highlight, although many present embraced ‘Pull Me Under’ given that was the song that hooked them global popularity initially.

After only a couple of minutes offstage, Dream Theater returned for the encore, a full rendition of the A Change of Seasons EP. Historically, this was an epic track that didn’t fit into the recording of Images and Words back in the day but several years later evolved into an EP. The whole band provided a plethora of technically proficient musical parts as well as the odd dash at piano based humour from Rudess adding comic relief to the subsequent emotive, virtuoso displays before heavy stabbing riffage focussed everything back to a full band playing a coherent song.

Tonight’s performance was remarkable to witness given the sheer talent on display and the amount of music played. Both new and old material gelled perfectly and showed how Dream Theater’s inspired musicality was in effect right from their early days. Whilst they are now elite, superb musicians, it was great to see such a pivotal album played in full, demonstrating their musical maturity and ongoing deserved reputation of being virtually peerless and not just within progressive metal. Their coverage of material respected the fans and had enough room to move within the set to allow each band member to branch out and add some improvised brilliance. This was a rare and epic performance.

Act Two:
Pull Me Under
Another Day
Take the Time
Surrounded
Metropolis Pt. 1: The Miracle and the Sleeper
Under a Glass Moon
Wait for Sleep
Learning to Live