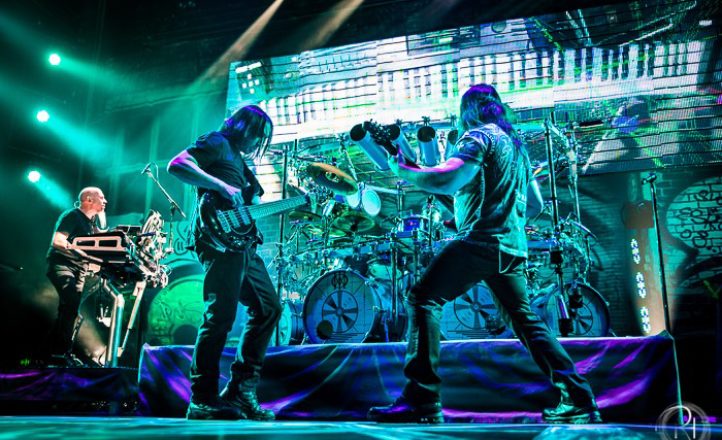 Dream Theater have a legion of loyal fans willing to undertake epic live performances that would require a packed lunch for the casual fan. Promising a three hour performance for an evening with the progressive heroes, the duration was in keeping with previous tours here, sans support act. Wandering into the venue, a large projection screen in front of the stage welcomed all with eager fans crowded down the front as an ambient keyboard wash filled the air. Images of various constellations and galaxies entertained many including any budding cosmologists. Dream Theater’s current visit came at the tail end of their ‘Along for the Ride’ world tour and given they only visited Melbourne and Sydney, it was well attended. As the venue filled up, a loud fanfare of pomp blasted across the PA providing a well made collage of Dream Theater’s impressive back catalogue cover artwork to kick off the two part performance.

The five piece band appeared whilst being introduced by their pre-recorded ‘False Awakening Suite’ to open live performances with the much heavier song ‘The Enemy Inside’, from their most recent self titled masterwork which now cements relatively new drummer Mike Mangini as an integral part of the band. As a visual backdrop delivered crisp and smoothly edited images, the tour rehearsed and amazingly not exhausted band were in fine form with a powering and clear sound right from the start. The further bulked up guitar legend John Petrucci had a whole side of the stage mapped out with his pedal board fortified by two knee height metal footrests to assist with guitar resting height for trickier passages. When not peeling off incredible technical guitar wizardry that few will ever match, he moved with confidence around the stage, acknowledging his legion of guitar head fans. Singer James LaBrie also appeared more at ease with the crowd delivering lyrics with conviction and powerfully melodic, vibrato inflected singing.

Generally, longer songs were the order of the evening and they were lapped up as ‘The Shattered Fortress’ from Black Clouds & Silver Linings represented the first foray into ex drummer Mike Portnoy’s epic twelve-step suite material. Representing Portnoy’s last three steps in battling alcoholism, the song was executed perfectly even if the gravity of the original songwriter’s absence might have been in the back of the minds of hardcore fans. Keyboardist Jordan Rudess amazed all, alternating between a revolving keyboard set up and later wandering the stage in other songs with a portable and very arty silver keyboard whilst ever reliable bassist John Myung retained his unassuming but essential role, hammering out some bass techniques lessons yet keeping the rhythm section powering along.

The rest of the first act or set consisted of a couple of songs from A Dramatic Turn of Events as book ends to more tracks from the Dream Theater album. The return of mind boggling instrumental tracks in later material was welcome, especially when the song ‘Enigma Machine’ kicked in and morphed into a riveting drum solo. ‘Breaking All Illusions’ closed off the first act to wild applause. They also snuck in the underrated song ‘Trial of Tears’ from the Falling into Infinity album.

John Petrucci’s live rig included six speaker cabinets with pseudo technical artwork draped across them, made all the more entertaining when he mock tampered with the settings before a solo, showing they are capable of a laugh amongst the serious musicianship displayed. This was further reinforced as the interval section consisted of a bunch of humourous video segments that essentially comically dubbed standard interview discussions on film. The highlight being a sound check conversation between Joe Satriani, John and Steve Vai, all with Jedi styled pre-fight banter and silly voices.

Act Two was certainly an impressive feat to achieve as instead of delving into selections from their comparatively more recent albums, the band chose to play the entire second half of the Awake album to celebrate its twentieth anniversary. Commencing with ‘The Mirror’, it was a down tuned riffage fest with time changes, guitar solos and crowd sing-alongs aplenty. ‘Lie’ naturally got a huge crowd response and John Petrucci’s soloing within showed off his much celebrated rapid fire guitar prowess. His deft use of delay effects in ‘Lifting Shadows Off a Dream’ hinted that his broad palette of sounds and skills were already well developed many years ago. A brooding, piano based ‘Space Dye Vest’ closed out the Awake section with building power and the odd Rush inspired, unique drum sound thrown in. The main set of the second act was then closed out with an epic rendition of ‘Illumination Theory’ from the latest album. Jumping between musical interludes and vocal driven sections, the multiple parts of the songs were performed with unmistakable attention to detail and natural authority.

For the encore, as promised, a celebration of the fifteenth anniversary of their concept album Metropolis Pt.2: Scenes from a Memory allowed highlights selections from the album to provide another twenty five minutes worth of music. Instrumental piece ‘Overture 1928’ segued into ‘Strange Déjà Vu’, with the crowd singing back lyrics to the band. Another instrumental came with ‘The Dance of Eternity ‘ before the initially piano based track ‘Finally Free’ aptly enough brought an end to proceedings, complete with associated thematic visuals as again, the crowd sung along with the end chorus.

There may be some lack of spontaneity from such as huge show and the set list did skip content from several albums in favour of interesting half album chunks but the tour wrap up really did show Dream Theater in spellbinding form. The show dynamics, great visuals, musicianship and choice of songs that ebbed and flowed well meant the audience was neither constantly bludgeoned nor bored to tears with crooning ballads. Dream Theater today remains an exceptionally talented band and have survived key personnel upheaval to retain their musical relevance. It was a truly sensational evening of music with a vast array of musical equipment on display and no hint of pretension. Brilliant.

Act One:
False Awakening Suite
The Enemy Inside
The Shattered Fortress
On the Backs of Angels
The Looking Glass + instrumental outro
Trial of Tears
Enigma Machine + drum solo
Along for the Ride
Breaking All Illusions