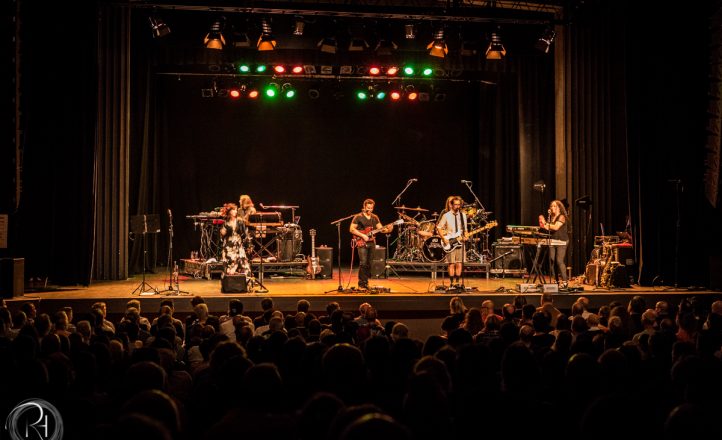 Frank Zappa was a musical visionary and an artistic inspiration to many of the world’s top musicians. He was also an acerbic satirist with a scathing wit that deconstructed the absurdities of the musical industry. He achieved that primarily with his prolific musical projects whilst being fully aware of the irony in delivering cutting critiques through genre hopping music. It remains very difficult to imitate. The Zappa back catalogue is immense and required demanding musical proficiency and discipline from his band to achieve both in recorded form and in live performance. Frank’s high standards were also evident from his columns in Guitar Player magazine in the early eighties which continue to offer rare and intelligent insight into the machinations of mainstream media consumerism.

Frank’s son, Dweezil, is clearly inspired by both his father and by the incommensurate musicianship of guitar virtuoso Steve Vai, who transcribed some of Frank’s most difficult musical pieces and played them in Frank’s band. That education has enabled Dweezil to master some guitar techniques to emerge as the musical band leader for the Zappa Plays Zappa project that came about several years back. Today, due to the limitations imposed by the Zappa Family Trust, his ongoing tribute to his father’s music has been rechristened. Hence, the latest version of the tour is titled ’50 Years of Frank: Dweezil Zappa Plays Whatever the F@%k He Wants — the Cease and Desist Tour’.

As the tour rolled its way into Australia, there was plenty of anticipation from the crowd of Zappa enthusiasts as to what that set list would entail. As expected, it was a brilliant and challenging musical gourmet of material from both The Mothers of Invention and from Frank’s solo works.

The show kicked off at 8pm with no support act. Amplification was done largely through the wonders of digital modelling equipment. But once Dweezil appeared and starting playing his Gibson SG from his centre stage position, backed by his six piece band, the sound was clear and authentic so any analogue purists present would have been hard pressed to pick fault with the quality of the live sound. Besides, they still had the curly guitar cables so the visual aesthetics of old were intact.

Opening with the musically explorative ‘Zomby Woof’ from 1973’s Over-Nite Sensation, it was clear this wasn’t going to be your normal rock show. It was followed by late sixties Mothers of Inventions material with ‘Call Any Vegetable’ including musically accompanied dialogue between vocalists, effectively narrated by Dweezil. This approach set the tone for the first set which was immersed in zany, seventies humour that dodged being dated by the strong musical production and confident performances. ‘Who Needs the Peace Corps?’ included vocalist Scheila Gonzalez adding saxophone and Australian Zappa tribute band Petulant Frenzy’s Kendal Cuneo​ [aka Miss Kendal] adding trumpet and singing whilst keyboardist Chris Norton contributed wacky vocals, as did bassist Kurt Morgan.

A couple of songs from 200 Motels flew past whereby drummer Ryan Brown, sporting a 70’s era Rush t-shirt, led the band into ‘Inca Roads’ from One Size Fits All. As Gonzalez played additional keyboards, Dweezil started off into some higher register improvisational guitar accompanied by impressive drumming and funky keyboard solos. Miss Kendal then took the lead vocals for the punk pop satire of ‘I’m So Cute’ from Sheik Yerbouti before ‘The Illinois Enema Bandit’ had bass vocal contributions from the monitor engineer Keith Jones at the side of stage.

Material from Joe’s Garage was next and allowed Dweezil to branch out into more instrumental fare in five piece band mode. Dweezil related to the audience that ‘Watermelon in Easter Hay’ is his favourite guitar piece by anyone and deflected a heckler that suggested it should be ‘Crew Slut’ from the same album. The deceptively gentle introduction soon picked up pace. The next track of ‘Keep It Greasey’ included the powerful dual vocals of Cian Coey and Gonzalez, a great distorted guitar solo tone and the rhythm section in tight synchronised groove. The set highlight though was a reworked version of ‘A Pound for a Brown on the Bus’ from Uncle Meat with a powerful saxophone solo from Gonzalez who then traded call and repeat musical lines with Dweezil.

After a brief intermission, the second set launched with the pop jangle and oinking toy pig silliness of ‘You’re Probably Wondering Why I’m Here’ from the 1966 debut Frank Zappa and the Mothers of Invention album Freak Out! Similar early material followed as the tracks ‘Harry, You’re a Beast’ and ‘Flower Punk’ from We’re Only in It for the Money, which bookended a swift wind instrument section of ‘The Orange County Lumber Truck’ from Weasels Ripped My Flesh. ‘The Black Page Drum Solo’ featured drums with reverb effects whilst ‘The Black Page #2’ included Dweezil adding the live material banter in droll fashion to introduce the melodies with a modern disco styled beat. In truth, it was more like progressive rock had spat out disco with an array of jazz fusion lines and time signature changes.

‘Teenage Wind’ from the 1981 You Are What You Is album was a jarring addition but worked when followed by the jam feel of ‘Cletus Awreetus-Awrightus’ from The Grand Wazoo. It was really the early seventies songs being celebrated that shone tonight as evidenced by the main set being closed off with the entire third side of the Roxy & Elsewhere double album that was released back in 1974. ‘Cheepnis’, a musical tribute to low-budget monster films, had a groove that took in the audience. ‘Son of Orange County’ was an expansion of the earlier aired similar titled song with lyrical content and an extended guitar solo from Dweezil that had different stylistic reference points very reminiscent of Vai’s interpretations of earlier Zappa material plus a couple of amusing lyrical references to an Eddie Money hit song. ‘More Trouble Everyday’ had powerful female vocals leading the song’s delivery plus a sly dig at the Bee Gees. The song allowed for a long, expressive, wah pedal filtered solo from Dweezil followed by the rhythm section locking in as the vocalists again powered the soulful, blues styled track. Band member introductions preceded the conclusion of the main set as the crowd applauded.

The encore hit and consisted of three tracks in succession as they appear on the One Size Fits All album from 1975. Starting with the gentle piano, drums and bright guitar of ‘Sofa No. 1’, a five piece version of the band was onstage. Some guitar noodling ushered in the second and longer funky, rhythm driven ‘Po-Jama People’ track complete with time signature changes and another creative, almost free jazz guitar solo from Dweezil as Brown let fly with some fast drum fills whilst keeping the time intact. The final song of ‘Florentine Pogen’ saw the full seven piece band again on stage and quite simply going off musically yet in unison.

One of the interesting aspects of a show that attempts to cover such a mammoth body of work such as that of Frank Zappa is the variations of available interpretations of songs from the original artist. In some instances, performances of songs include live renditions of live performances of recorded material, if that makes sense. So, some songs were no doubt tightly scripted to the live recordings for the benefit of the fans whereas others delved into improvisation. Maybe that’s a question for the Zappa archivists. For everyone else, it was simply a great night of music celebrating the remarkable legacy of the late, great Frank Zappa as done so respectfully by Dweezil and band.

Lemme Take You to the Beach

Who Needs the Peace Corps?

What Will This Evening Bring Me This Morning?

She Painted Up Her Face

A Pound for a Brown on the Bus