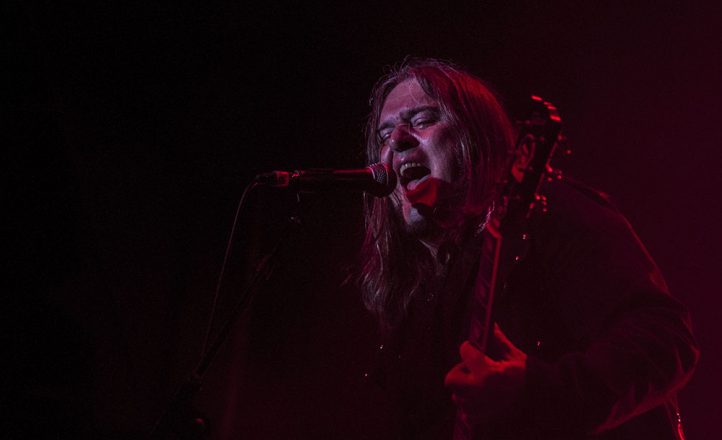 Rolling in like a fog on another dark and dreary night in Hobart, punters gathered in their masses at Hobart’s Odeon Theatre for the second sold out night of English stoner gods Electric Wizard.

Having witnessed their performance the night prior, I knew I was in for a set that was nothing short of perfect. Thirteen years since their last tour Down Under, the air was electric as Dark Mofo had secured their only performances on our shores and punters from around the country travelled for the epic shows.

With no support acts the lights dimmed right on time, the air buzzing from the drone that emanated from the massive set of Marshall amps lining the stage, small puffs of dope smoke reaching for the sky.

Jus Osborn was in fine form, the music possessing his consciousness, culminating in a gun shot to his temple during the height of ‘Return Trip’. Both Liz Buckingham and Clayton Burgess were a mess of hair, head banging to every solid riff they lay down. With his sticks raised high in the shape of an upside down cross, Simon Poole rounded out the crushing drums for ‘Satanic Rights Of Drugula’, footage of leather clad bikers flashed behind the band, the room thick with riffs.

Security turned a blind eye to those passing around a cheeky joint, with one bloke falling asleep for the remainder of the set on a random punter’s lap, who was nice enough to let the poor soul nap.

The set differed to the Thursday night with ‘Dopethrone’ being replaced with the sludge as fuck ‘Supercoven’ before closing the 90 minute set with the otherworldly ‘Funeralopolis’, a ten minute decadent trip through the psyche filled with smoke and riffs.

With many in attendance having waited 13 years and travelled countless miles to get to Dark Mofo, after a set like that, it was well worth the travel.