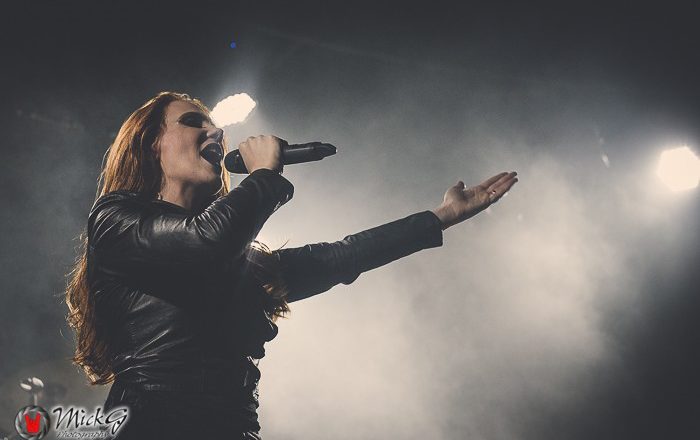 The return of Epica meant that tonight’s show had a substantial queue to wander into the venue but once in, catching Perth’s Voyager proved to be worthwhile. Well-rehearsed, tightly executing their material and using decent production techniques to bolster their performance, it would take a pretty jaded rocker to not be enticed by their approach. Having said that, why their front man insists on having a haircut that requires whipping his hair back regularly is a minor irritant but is distracting. Still, the five piece know their audience and produce their sound well. Loud, powering and yet somewhat ethereal in parts, the band was a suitable support for Epica. For example, ‘Misery is Only Company’ grooved and hammered away with seemingly apt melodic vocals and keyboard washes.

Triggered drums, twin guitar solo harmonies, some impressively fluid and ripping guitar solos and fingerstyle bass proved revealed their musicianship and ability to have a laugh via diversions into some crowd baiting Euro-pop. Thankfully short-lived, the band soon returned to their metal stock in trade with drum parts that thumped through the PA for a brief interlude before the industrial tinged metal resumed. Ebbing between light and shade is Voyager’s strength and their songwriting is all the better for it as choruses build well, as heard in ‘Hyperventilating’. Any bass overload dramas that took hold were dealt with professionally as the band then closed the set with the brilliantly catchy ‘The Meaning of I’. One of the better bands doing the rounds nationally and highly likely to be headed for bigger things.

With the audience suitably warmed up, the stage set of Epica slowly revealed itself. Using clear staging that was no doubt European festival experienced and with the pre-requisite riser platforms in place, lighting tested and being utilised as a bold backdrop in place of the usual artwork, the band soon entered the stage as a symphonic piece from most recent album The Quantum Enigma ushered in their arrival. Bombastic as desired, the double bass drumming of Ariën van Weesenbeek kicked in as the twin guitar riffage from guitarists Mark Jansen and Isaac Delahaye pushed the volume in the room.

The stylishly black leather clad and flaming red haired vocalist Simone Simons soon appeared and took to the song ‘The Second Stone’ with operatic authority. Meanwhile keyboardist Coen Janssen spun his keyboard around a pivoted stage piece, dropping the odd comical high kick whilst trying to look spontaneous but his instrumentation was an essential backing to the sonic wall. The growled vocals from Mark Jansen in ‘The Essence of Silence’ contrasted well against the skillful soprano vocals of Simons who simply had the crowd in her hand within a couple of songs. Even though the twin guitar attack filled all the metal boxes with the odd burst of guitar soloing for good measure, it was done succinctly and almost effortlessly such that if the stage moves were choreographed, it wasn’t obvious.

Journeying back to the first album The Phantom Agony, ‘Sensorium’ had a definite Nightwish vibe to it during bassist Rob van der Loo locked in well with drummer Ariën van Weesenbeek whilst the crowd were geed up with handclap participation. Whether it was red or blue lighting, flashing strobes or bright stage lights, the drumming was delivered with focused precision. Similarly, when solo vocal segments did approach for brief band tacit, a spotlight was used to full effect before the drumming led the audience back into the rhythm of the songs as heard during ‘Storm the Sorrow’ from Requiem for the Indifferent. Simons did not miss a beat in returning witty banter to anyone game enough to express their adulation of her replying that ‘I love you too but don’t tell my husband’ before the gravitas laden ‘Chemical Insomnia’ continued on delivering their latest material complete with a rollicking drum solo. It was followed by the equally dramatic ‘Cry for the Moon’, another track from their very first album.

At the halfway mark the energetic ‘The Obsessive Devotion’ from The Divine Conspiracy was performed during which the band member’s had their hair swaying in unison as fist pumps from the crowd soon intensified as the song ‘Victims of Contingency’, again from the most recent album, showing the band in fully rehearsed, symphonic metal glory. Roaming keyboards also kept the crowd entertained with the use of a unique, curved, audience facing keyboard that had Eurovision style but the evident musicianship let them get away with it. Meanwhile, the song ‘Quietus’ from Consign to Oblivion had Simons again in fine vocal form. Closing the main set with the title track from Design Your Universe was a masterstroke of symphonic metal by ending with lighter, less oppressive sounds after the song swayed between driving metal and soothingly melodic, operatic tones.

The encore soon showed the band’s great skills in musical continuity and revealed aspects of the band’s development as material from The Divine Conspiracy and Consign to Oblivion book ended the most recent album track ‘Unchain Utopia’. The encore itself kicked off with a jovial keyboard refrain and crowd that almost undermined the introduction of ‘Sancta Terra’. Slower paced, the song pulled in the audience to sing along. As the song picked up pace, mobile band members took to the front of the stage.

Announcing a new album in the works, the song ‘Unchain Utopia’ from the latest album sped up the pace as did the following set closing song ‘Consign to Oblivion’ at which point a huge wall of death was encouraged as the band leapt into their final bombastic onslaught of the night. Some were more interested in standing still to appreciate the vocal prowess of Simons instead of moshing. Either way, tonight’s show proved that symphonic metal still has a substantial and loyal following eager to enjoy world class bands such as Epica. Confident, thoroughly engaging and with great stage presence, Epica avoided the self-indulgent trappings of some global bands by simply being entertaining throughout their show and delivering a selection of great songs in their set list.