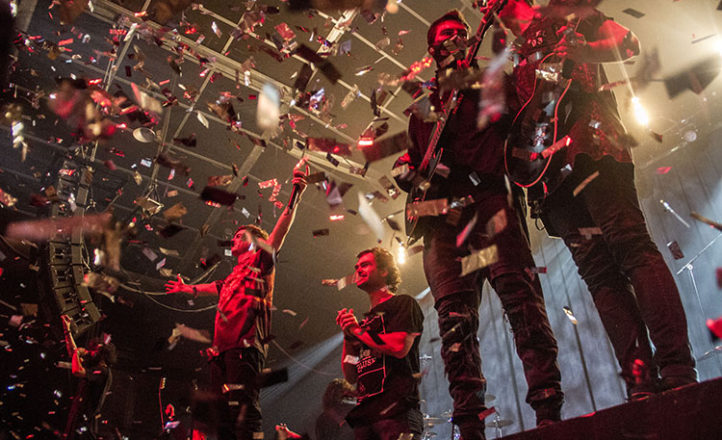 Backing up a second night at the Big Top after Steel Panther the night prior is a big ask, but a bill like Northlane and In Hearts Wake playing together as one band on one stage is worth backing up for.

Local openers Ocean Grove had the already huge crowd, considering the early door time, streaming over the barrier, making security work for their money from the get go. Huge riffage and some solid chops worked the crowd, making for a very intense opening act, not often seen on a stage this size.
Almost-locals, Canberra quintet Hands Like Houses, had girlfriends on shoulders of boyfriends from the very first note as their melodic metalcore rang true. The synth driven bass lines and melodic verging on screamo vocals had much of the front half of the room screaming along.
In Hearts Wake took the stage and made it their own. With a trippy light display projected behind them, the five piece ripped through a set of melodic breakdowns, riffs and melodic vocals and screams. Sure the show wasn’t completely sold out, but every punter here displayed double the energy, with non stop circle pits running circles around the floor. Kids these days.
The clean and rough vocals between front man Jake Taylor and guitarist Eaven Dall was perfectly clean in the mix, it appears all sound issues from years previous at the Big Top have been worked out.
Without skipping a beat, In Hearts Wake departed to be replaced with co headliners Northlane. The absolutely destructive bass drops, synth driven riffs and Marcus Bridge’s gruff vocals hit home hard, straight to the chest. A duet with Hands Like Houses vocalist Trenton Woodley had the crowd swarming, but this show wasn’t even close to done, after a ripper of a track, ‘Quantum Flux’, Northlane were gone and Byron Bay hard hitters IHW were back again, this time with Ocean Grove front man Luke Holmes sharing vocal duties. Already this reviewer is loving this nonstop concept.
A slight breakdown of Whitney Houstons ‘I Will Always Love You’ tricked the entire audience into singing along. And what makes a metalcore show even more fun? Giant fucking balloons!! Closing with ‘Breakaway’ the balloons continued to be batted around the venue.
Back for their second run, Northlane hit hard, with ‘Worldeater’ and then completely slowed it down with ‘Weightless’ and the audience on the floor, Slipknot style. A reemergence of the Ocean Grove guys with some hardcore rap vocals. It also became apparent that guitarist Jon Deiley is vying to be the next Wes Borland with a balaclava clad face.
A short interlude heralded the finale, ‘Equinox’ with all ten members of both headlining bands together on stage. If the crowd weren’t already firing on all cylinders, then they certainly were now.
As confetti rained down, energy seethed through the crowd, numerous punters flooded over the barrier nonstop for the entire encore set. As the lights came on, not one face was without a smile plastered across it… well maybe not the cleaning crew.