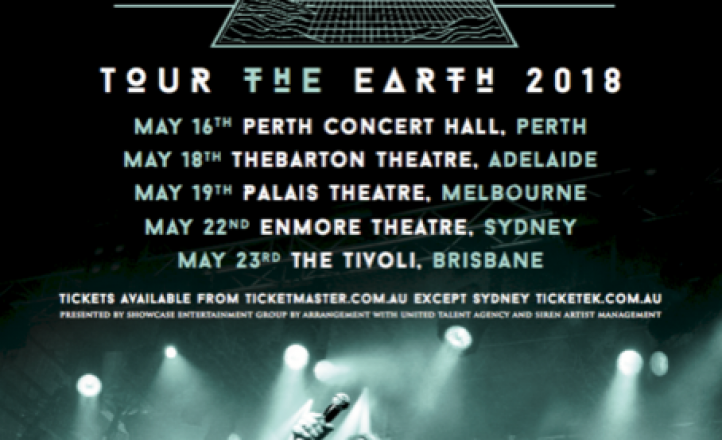 While fully aware of audience perceptions based on their big hit in the Eighties, Europe have soldiered on releasing varied music that now constitutes a substantial back catalogue. Their latest, Walk The Earth, is a fantastic album steeped in classic styles but with great choruses and dynamic delivery that promised to enhance their first ever tour here and not make it an Eighties nostalgia trip.

So it was that for the first time ever, Australian audiences were to be treated to two full sets of great, guitar based rock music from one of Sweden’s finest bands. The front area of the stage was well packed behind which a seated area was reasonably well populated with some upstairs punters also scattered about. It was probably fair to describe it as a bit of an intimate crowd, possibly a slight casualty of the ridiculous slew of international tours in the last couple of months. Still, those present were determined to have a great time.

As no support acts were slated, it was a strict start time of 8pm which kicked off with the title track from Walk the Earth. This reviewer luckily made it to the venue in time for the end of the second track tonight, ‘The Siege’ and it was immediately clear what a crisp and well-rehearsed sound the band had with their performance chemistry well intact. Frontman Joey Tempest took to the stage with his unique white microphone stand and had the audience’s gaze as he demonstrated why Europe’s success was in no small part due to his brilliant stage presence and strong vocal delivery.

Initially John Norum had some guitar grounding noises to contend with on his cream coloured Fender Stratocaster but they were soon ironed out. Of course, the Yngwie Malmsteen and hence Ritchie Blackmore influence was clearly evident. That’s not a bad thing and makes sense given Norum’s istory but more importantly, his tone was gorgeous with just enough gain to soar for speedy guitar solo parts plus plenty of grunt to really drive the rhythm guitar parts played without overpowering the live mix.

‘Rock the Night’ deftly segued into a welcome snippet of AC’DC’s ‘Whole Lotta Rosie’ before an abrupt stop post Norum’s solo rendition to refrain back into the original song’s chorus. Earlier material from Wings of Tomorrow with the Deep Purple influenced ‘Scream of Anger’ had Norum provide some wah pedal magic and ferociously fluid guitar soloing. It was a perfect song to play before the very Rainbow sounding ‘Danger on the Track’ with great keyboard work and the catchy ‘Firebox’ from Bag of Bones.

A breezy piano introduction ushered in ‘Sign of the Times’ from 1988’s Out of This World album complete with chorus sing-alongs once the pace picked up. ‘Girl From Lebanon’ from 1991’s Prisoners in Paradise was next and offered a snapshot of how the band was developing musically at the time compared to next track, ‘Open Your Heart’ was effectively a vocal driven power ballad and saw Tempest strumming an acoustic guitar.

The title track from War of Kings followed and the band really kicked into gear with some heavy, driving material. The first set highlight though was surely the closing track of ‘Superstitious’ with sing-alongs as Tempest roamed the wings of the stage whilst Norum delivered yet another a tasty guitar solo. Tempest acknowledged the Whitesnake influence by launching into ‘Here I Go Again’ bookended with an unexpected bit of reggae referencing The Police’s ‘So Lonely’ and Marley’s ‘No Woman, No Cry’. It somehow worked thanks with the keyboard sound and laid-back drumming driving the overall feel.

On returning to the stage for their second set, Europe look refreshed and delved deeper into their back catalogue. ‘Ready or Not’ warmed everyone back up but the next track, ‘Last Look at Eden’ was a driving, slow building, almost Dio-sounding song. ‘Seven Doors Hotel’ saw Norum play in unison with the keyboards, ‘Carrie’ performed was poetically by Tempest as the crowd sang long, holding their phones up. ‘Stormwind’  showed how Europe had the song structures down pat before breaking into their superstar era. ‘GTO’ from Walk the Earth roared through the set in a clear nod to Deep Purple’s climactic ‘Highway Star’.

After a very short break, it was encore time but Europe were, as bands with a stratospheric huge hit tend to do, teased for the song that many came to hear live. ‘Cherokee’ from The Final Countdown was well received by the enthused crowd singing along with the chorus. Then, almost on cue, the venue was filled with phones held aloft, poised to capture ‘The Final Countdown’ as the introductory keyboard line was played. One of Europe’s skills is being able to play a song they have no doubt played at virtually every show without appearing the least bit jaded.

Tempest bounced across the stage to sing and, as is probably the case at every show, had the crowd sing all the lyrics of the hit song back at him loudly. Norum’s classic Yngwie styled solo was played meticulously with the guitar tone perfect and during the second passage of the solo, he ventured over to centre stage as the crowd lapped it up.

As expected, Europe were superb and unless something miraculous touring wise happens between now and the end of this year, it may have been the best rock show for the year if not in many years. If Europe do tour here again, go and see them. They are simply sensational live and possess a very impressive back catalogue too making their show hugely entertaining.