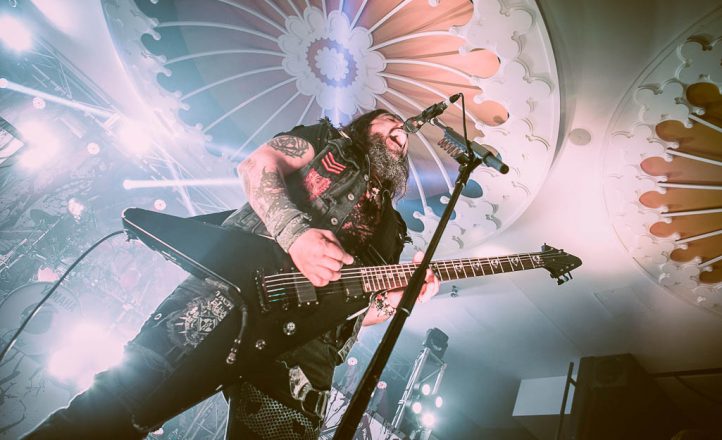 The atmosphere is electric when LOUD reaches the Eatons Hill Hotel, doors were due to open at 8, but after arriving early to meet a couple of other eager, ready to go punters it is drawn to our attention at the bar that they had been opened earlier due to the baying crowd at the gates.

Once inside it is obvious that despite an album that is dividing fans and media alike the fan base hasn’t taken much notice.  As the lights go down and the first of many backing tracks start the evening the band make their way onto the stage one by one before bursting into ‘Imperium’ and the energy that has been building explodes as the play into ‘Volatile’ from the new album and ‘Now We Die’ complete with string intro to bring the atmosphere of the song along.

With the newer songs inserted early to pick out the new fans from the old, nobody seems to care as Machine Head steam roller everything, peppering in songs from every era, including ‘The Blood, the Sweat, the Tears’ and another one off Catharsis, ‘Kaleidoscope’, with no signs of letting the crowd, or  themselves, catch a breath.

The first break comes after a crushing ‘Clenching the Fists of Dissent’ as Phil Demmel yells ‘Woo!’ into his microphone and begins a short guitar solo while walking across the stage and yelling into every mic, as those in the pit respond in kind much to his obvious delight. As the stage lights go dark, the only sound to be heard is an acoustic guitar and Robb Flynn walks out on stage with electric guitar on his back, an acoustic in his hands.

The whole time playing the opening riff of ‘Darkness Within’, he gives a short anecdote about the first time Machine Head toured Brisbane in 1995 or 96, his memory “a little fuzzy” on the timeline, and when the moment is right, he launches into the song semi acoustically. The transition to electric is seamless as the rest of the band help steer the song into heavier musical territory before the sing-along as Flynn conducts the masses before him like a demented choir master. What feels like the entire audience sings the final refrains of a song about moments just like this.

Machine Head continue to thrash through an extensive list of songs old and new including ‘Ten Ton Hammer’ and a version of one-off single ‘Is There Anybody Out There’ more in a heavier vein to suit the evening, and it must be said that it sounds better heavier.

Much needed rest comes courtesy of a Dave McClain solo drum set ahead of  the band returning one more time to revamp the energy and get the circle pit turning harder than earlier in the night, kicking the third set off with ‘Bulldozer’ before pushing into a crushing ‘Killers and Kings’. In between songs Flynn starts jamming ‘Welcome Home (Sanitarium)’, tripping over some riffs but having fun with it. It would have been great to see the band push on with a full cover.

As the evening comes to a close the biggest reaction comes for ‘Aesthetics of Hate’ and closer ‘Halo’. As Robb Flynn continuously thanks those of us lucky enough to witness them play at the absolute peak of their power, it occurs to this punter that Machine Head have become a lot like another much more famous Bay Area band, while releasing albums of arguable quality and length, it is the live show where their bread and butter is and they know it.

Imperium
Volatile
Now We Die
Beautiful Mourning
The Blood, the Sweat, the Tears
Kaleidoscope
Clenching the Fists of Dissent
Guitar solo
Darkness Within
Catharsis
From This Day
Ten Ton Hammer
Is There Anybody Out There?
Locust
Beyond the Pale
Drum solo
Bulldozer
Killers & Kings
Davidian
—
Descend the Shades of Night
None But My Own
Triple Beam
—
Aesthetics of Hate
Game Over
Old
—
Halo