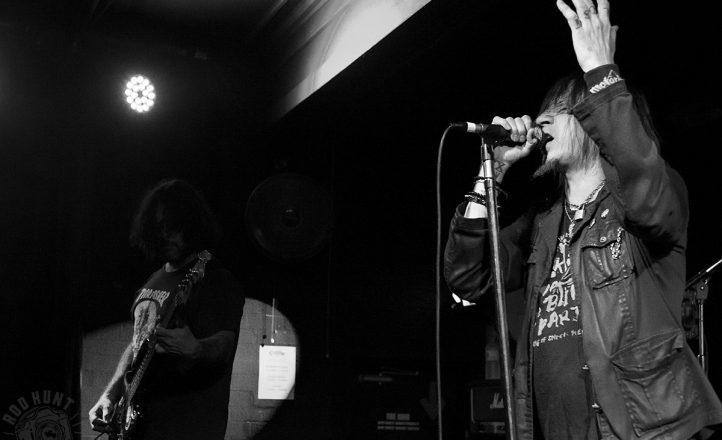 As a moderately successful cult band existing, at present, with no original members, Eyehategod’s career is still being forged out the same uncomfortable hardship that first made their music so memorable.

Over the past 31 years, New Orleans’ notorious sons of sludge metal have survived and overcome poverty, injury, customs interrogations, a seven-year band hiatus, and the death of original drummer and co-founding member Joey LaCaze in 2013. Mike IX Williams, the group’s longest-serving member and definitive vocalist has miraculously stayed with the band since 1988, providing all lyrics, themes and screams. Throughout his life of 51 years, he’s prevailed against an orphaned childhood, asthma, and early-90s homelessness, with a house burning, a heroin habit, and a 91-day jail sentence in 2005 from a narcotics charge. More recently, Mike fought against a bout of chronic fatigue in 2015, and a liver transplant in 2016. Sadly, more hardship was on its way.

Earlier this year in Mexico, current drummer Aaron Hill was attacked with a knife and robbed by three men and a woman in Guadalajara. Due to recent family obligations, long-serving lead guitarist Brian Patton left Eyehategod last year, after being with the group since 1993. Although agreeing to re-join them on their recent Australian tour as a fill-in member for Jimmy Bower, his future with the band seems very uncertain. Although definitively known as a five-piece, original member Jimmy Bower had to sit out from their Australian tour, due to an arm injury. In a recent social media statement, Bower’s cause of absence was rephrased as ‘seeking treatment from visions unknown’, leading to rumours of more drug-related psychosis for the band.

“We joke… we kid”, announces Mike, when we see him onstage at the Crowbar. From the viewpoint of a genuinely dark and damaged band, humour must be an important source of connection and inner strength. It allows a break from the trademark misanthropic energy of these men. Fortunately, their latest stint in Australia comes with re-connection to our nation’s laidback larrakin culture, and has led to past tour photos showing band members relaxing with kangaroos. It’s the first time in half a decade they have landed on our shoreline.

In the time it’s taken for Eyehategod to return, the two Sydney-based support bands were formed. Toking a leaf out of the book of Windhand and Electric Wizard, Potion warmed the crowd to a simmer with slow, lumbering riffs, vast echoing vocals and an arcane vibe borne of darkly enchanted, distant places. Staunching the stage to corrupt this mysterious, esoteric energy, Black Rheno exhibited the direct intimidation of a modern hardcore act, as equally rooted in faster forms of metal and crossover-thrash as in the ways of sludge. Such an eclectic blend of influences must have endeared them to Eyehategod, for the trio were chosen as the main support act for the entire Australian tour. After bald maniacal frontman Milla aikido-rolled onstage to the sound of Shittyflute’s cover of Celene Dion’s My Heart Will Go On, we were treated to something completely different. As the relatively-tame punters pondered on getting involved, a frantic push for the crowd’s energy was the defining feature of Black Rheno’s set. Greedily trying to soak up as much venue energy as possible, the trio weren’t about to make their show unmemorable. This eventually led to Milla jumping down from the stage to literally grab and waltz with people on the floor.

We then continued to be egged on for a ‘fucking dance’ through their impressions of NOLA riffs, impressive drum fills and long, growling vocal notes. Unfortunately, Black Rheno’s set had to be cut 15 minutes short, as dreadlocked drummer Dougie put a hole through the impact-side skin of the Crowbar’s backline bass drum.

Before Eyehategod took to the stage, our casual booze-infused identity caused us to be amused by the surprising hand-picked songs that played over the Crowbar’s PA. After hearing selections from The Damned, The Birthday Party, The Modern Lovers and the Butthole Surfers, the four-piece emerged while Suicide’s Frankie Teardrop pulsed through the speakers. Lathered with ominous synthesised hiss and mutated screams, the ten minute piece tells a simple tale about a deranged young murderer who kills his wife, his baby, and himself.

After this initial post-punk atmosphere, Suicide’s shock tactics allowed Eyehategod’s intrinsic themes of crushing swampy darkness to be brought back to centre-stage, before grotesque peals of feedback signalled the beginning of a generous set. Meanwhile, Williams yelled out his famous opening lines, and proceeded to lift his microphone and stand through a small porthole above the stage, before hoisting it upside down and swinging it around in an attempt to generate as much noise as possible.

The all-consuming riff from New Orleans is the New Vietnam then churned out from the amp stacks as the first real piece of actual guitar playing to be heard. They chose the right song. Nearly everybody in the room felt the groove immediately and jumped into the fray, including myself. After we joined in on the familiar disturbing ‘chorus’ of Sisterfucker:  “burn her, burn her”; we moshed through Medicine Noose to observe Williams gathering up his long microphone cable and stuffing it into his mouth.

After referring to the burly audience as ‘kids’, his classic punk irreverence made an impression, as he called for riots and leaned in to sway around on his mic stand in displays of comfortable catharsis. During a brief break from the thick and oppressive sound of his band, Williams revealed tender appreciation for the crowd after flipping us off and offering peace fingers in unison. “We love you. From the bottom of our shoes.”

Spanning a three-decade discography of eight single releases, five studio albums, three compilations and two demos, with a sixth studio album in the works since last year, choosing a setlist may seem like a daunting task for the group. We now know that 19 of Eyehategod’s most recognisable songs were pre-determined before arrival in Australia, comprising a neat list that was toured around Japan and the US over the past two months. An even selection of four from 1993’s Take As Needed For Pain and 1996’s Dopesick were complimented by an array of five new tracks from 2014’s self-titled studio album, the latest cohesive full-length to be released after a period of 14 years. We also heard two tracks from their debut 1992 album, In The Name Of Suffering, and a small array of tracks from single-releases, compilations, and other studio albums. After Williams, Patton, Hill and bassist Gary Hader eventually left the stage, the venue and the city to travel to their last Australian date in Brisbane, we all shared a communal sense of relief and satisfaction to have finally caught this act in the flesh.

I don’t know when they’ll be back, what songs they might play, or if the members will be different, but I know we’ll be willing to see them again. As a global community of music fans, we have to cherish these influential older bands before they’re gone for good.

New Orleans is the New Vietnam
Jack Ass in the Will of God
Parish Motel Sickness
Blank / Shoplift
Agitation! Propaganda!
Sister Fucker
Medicine Noose
30$ Bag
Lack of Almost Everything
Take as Needed For Pain
Masters Of Legalized Confusion
Nobody Told Me
White Nigger
Serving Time in the Middle of Nowhere
Left To Starve
Methamphetamine
Run it Into the Ground
Worthless Rescue
Dixie Whiskey