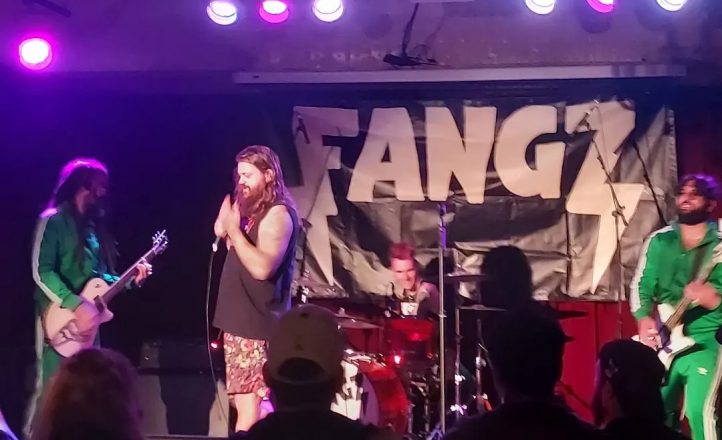 After at least one previous recent attempt that was thwarted by the dreaded COVID, Fangz finally made it back to Katoomba this evening with the promise of a fun night of rock and roll, with some cool acts helping to warm up a cold Blue Mountains evening.

Openers Naugrim had already finished their set when I arrived and Lithgow trio Celestial Oath were about to bring down the doom. Despite the 9º weather outside, these lads went shirtless, either because they were hardier types, or because they’re a bit nuts. Whatever the case, it was immediately obvious they know their business as they brought down some huge psychedelic doom built on catchy riffs, dual-vocal harmonies, tricky drumwork and bass melodies. The epic jamming nature of their songs meant that, structurally, Celestial Oath fell back onto a familiar pattern of long intros and longer instrumental breaks but that means plenty of epic soloing and monstrous grooves, and no one can complain about that.

Next up came Downgirl, instantly living up to the hype they’ve stirred up in their short time as a band as they ripped into the room with a furious set of punked-out and uproarious rocking. After an acknowledgement of country, Downgirl tore it up like a wrecking machine made up of the Runaways and Bikini Kill. Their set an unabashed display of energy, early 90s riot girl attitude and unbridled enthusiasm as they veered from straight-up punk to the smouldering L7-esque grunge of Beauty Queen to a wild and totally appropriate cover of These Boots. Drummer Scarlett pounded the kit into submission in some frustration at the lack of drum fill but if she was worried, she need not have been. Downgirl have a chemistry and onstage presence that would embarrass dozens of other bands who’ve been around for years and inject every moment they’re on stage with wild abandon and fun.

Fangz of course are all about fun and within about three seconds of being onstage Josh had already backflipped and Jameel had beer all over him. Part raucous punk rock band, part clown act, Fangz are a whirlwind of barely-controlled, beer-swilling chaos. One moment they’re straight-up pop-punk worshipping at the altar of blink-182 with Falling is Pretty Normal, the next flat out metallic party punk like their spirit animal Cancer Bats, then into the Hives’ Hate To Say I Told You So, just because. Energy levels never fall below the red line as Sam tears out the riffs and Woody somehow keeps everything on an even keel like a green tracksuited Keith Moon, while Josh and Jameel clown around pouring beer over each other and anyone else close enough to the stage. Charismatic, fun and never out of high gear, Fangz are the perfect party rock and roll band and Katoomba copped a pretty decent serve of it tonight.