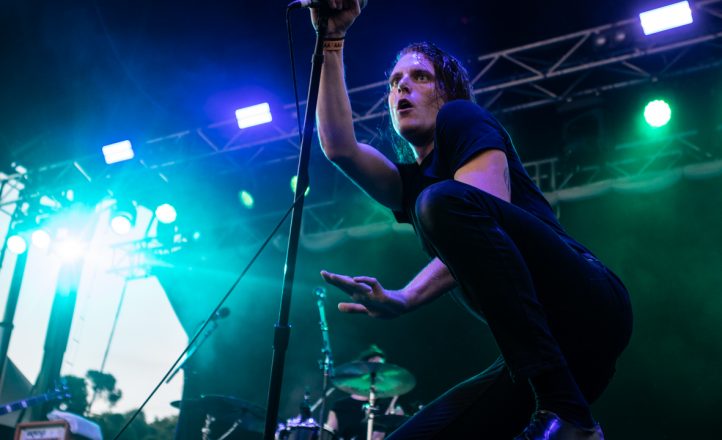 Situated in the sunny south coast town of Wollongong (aka The Gong), Farmer and the Owl Fest almost didn’t happen. With the NSW Government’s completely backwards stance on festivals, being the first time in this format naturally the festival is ‘high risk’ and the Police presence shows that they’re not backing down. Being greeted with almost two dozen officers, some in Jack boots and bulletproof vests, and multiple sniffer dogs in action was a daunting experience to say the least. People are here for fun, these guys are prepared for war.

The gorgeous tones of Stella Donnelly rang across the grassy knoll of MaCabe Park in the early afternoon sun. Despite swallowing a fly during her opening song, she kept her composure and finished the track. An absolute delight to welcome in the day. Throughout the day, the ‘Let Burelli Be’ stage threw up the best local music one could witness.

Wollongong rockers Jacob peddled some serious rocking grooves, heavy indie rock n roll, followed by the mystic mountain sounds of Velvet Elevator who were introduced to the stage by the prophetic heralding of a hooded man of wisdom. Grunge psych rock made way for heavy jams and noodly guitar, a little bit of everything in a whirlwind of head banging.

Continuing that rock star vibe, Melbourne shoegaze vendors Flyying Colours tore the audience a new one. Not satisfied with staring at their feet, guitarist Brodie J Brümmer bent and contorted, flinging his guitar with little regard. Verging on noise rock, the four piece grasped the crowd in their hand and squeezed.

Though it was mid afternoon, the crowd that had turned out was still on the smaller side of capacity, meaning less lines for beers and food. Over in the Record Crate room, Frenzal Rhomb’s Lindsay ‘The Doctor’ Macdougal was interviewing the lovely Stella Donnelly, followed by an acoustic set from Joyce Manor later on.

Main stage, though empty for Detroit native Flint Eastwood’s opening number, her massive track ‘Sober’ soon found the crowd making their way over, dancing along with the infectious grooves of the indie pop set.

With the sun high in the sky, the eclectic mix of people that had turned out for the day bore witness to the rocking jazz indie of Missouri’s Foxing. Trumpet in hand, Conor Murphy lead the hill side audience through a meandering, rock n roll set of indie, jazz and post rock, coming away with a multitude of new fans.

Everyone’s favourite tie dye sons Totally Unicorn were about as subtle as an A-bomb. From the moment they tossed a pizza into the crowd to the finale where burly front man Drew Gardner tossed a chair on the canopy of the stage, there would be no reprieve. Performing majority set of new songs, ‘Grub’ and ‘I’ll Be Fine Now’ tearing the place apart, with all the usual in-crowd antics, where Gardner spent much of the set, using the mic lead as a skipping rope, high flying crowd surfers and unwarranted nudity, naturally. There’s one final hurrah as Gardner sat in his chair while the circle pit swirled around, said chair would spend the rest of the night on the canopy of the stage.

Running straight from TU to the Forest Stage for Melbourne’s purveyors of fine haircuts and dirty punk rock, Amyl and the Sniffers. The four piece kicked it into gear, powerhouse front woman Amy Taylor kicking out the jams and jumping into the pit for a bit of action. ‘Monsoon Rock’ and the catchy as 70s ‘Street Munchies’ rocked the shit out of the Gong. A wild set of hard and fast.

Standing out like a sore thumb, the heaviest band on the bill, Deafheaven, are equal parts beautiful and completely brutal. Screamer George Clarke is like a snake, twisted and contorting, eyes stare through the soul as he screams banshee like into the blackened depths. A completely new track premiering to Australian audiences, ‘Black Brick’ is a monster slab of post metal intertwined with wrenching black metal. One of the few metal bands to capture a Triple J audience, despite what purists say Deafheaven are a force to to be reckoned with.

With the setting sun came dinner time, and with the festival grounds spread out, lines for food and drink were a minimum.

Perhaps cramming seven members of The Pinheads on one tiny stage was a logistical nightmare, also the reason why the band were less animated than previous times. Nonetheless they pumped out some serious garage rock, the audience hungry for more as wild eye vocalist Jez Player jumped into the barrier. A rocking affair by all accounts.

The opposite can be said for Dinosaur Jr main man J. Mascis, a slow, droning tone. A cup of tea sits idly by, slowly sipped for the duration of the set. The perfect setting at the Forest stage, the trees hugged the audience as others sat on the hill blissfully in tune with the deathly acoustics of one of rock’s greats.

Local lads and festival headliners Hockey Dad pulled the biggest crowd of the day. The majority of the 3500 in attendance had gathered for the surf rock duo. ‘Homely Feeling’, ‘Disappoint Me’ and huge number ‘Join the Club’ had girls up on shoulders. One punter in a green lawn chair  was hoisted up high and passed around the crowd prompting security to jump into the pit, with guitarist Zach Stephenson telling him to ‘get the fuck out’, dedicating the slow affair ‘Danny’ to the security guard in question before wrapping up their first ever festival headline set with ‘Sweet Release’ and ‘Seaweed’.

The last band of the day was to be the wildest band in existence. New York noise rock experience A Place To Bury Strangers showed absolutely no respect for instruments or even the fundamentals of music. By the conclusion of the first number two guitars lay in pieces on the stage floor, having been tossed into the rafters before being smashed to smithereens.

Hidden by the flare of bright lights, drummer Lia Simone Braswell kept the rhythm steady, between bursts of maniacal fills and the destructive force of Ackermann and Lunadon on guitar and bass, her haunting voice resonating into the night. With the crushing force of a third guitar into the ground the show was over in a blink of an eye, mouths left agape in awe of what was witnessed.