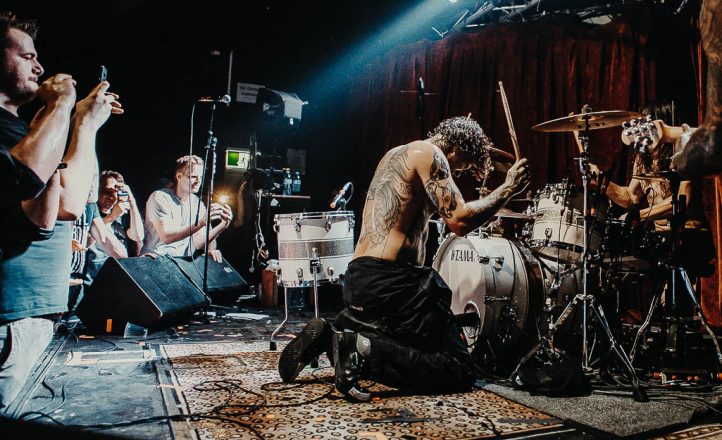 Before setting light to stages in Sydney and Melbourne for Download, Fever 333 brought their incendiary live show to a venue in Brisbane that has made its name in recent years for giving some modern hardcore bands a great stage on which to perform.  Built in an old church, a small stage barely risen from the floor is all that stands between crowd and band.

With no support act to warm up the room, Fever 333 are relying on reputation alone and an explosive album released earlier this year, and do they deliver in spades. As the intro rolls out, Jason Butler stands silent and hooded, his fist held in the air as a show of defiance.

The crowd surges forward as the band dive headlong into ‘Burn It’, trying all at once to make their way to be on stage, feeding off the energy. Butler doesn’t take long to dive head long into the pit to get held aloft screaming while guitarist Stephen Harrison stalks the stage, bounding from one side to the other.

After a riotous start Butler interacts with the crowd, and every time he does  he puts the mic down. The room is small enough that those in the back can him without it. His messages are of positivity and human connection, and it is as if for these brief moments the old church is serving its original purpose again.

After the popular energetic performance of ‘Animal’, Fever 333 breaks down into beat boxing and drum solos which feels a bit odd at a show of this nature, buts fit well into their eclectic aesthetic. The ballad ‘Inglewood’ goes over better than anyone could have hoped for in such a high energy environment, as the lights dimmed and the band paced back and forth slowly across the stage.

Butler then makes another rush on the audience, this time with a drum in his hand during ‘Hunting Season’  as the crowd pass him right to the back as he beats the drum until the head bursts and the song finishes in an explosion of energy. This is another reminder of why I enjoy performances in such intimate settings as these – shared energy and no room to hide. Fever 333 pad out their studio sound with backing tracks and electronics, but here in this environment that is lost in the performance and the music is better for it, carrying more power and weight.

After a short break to allow some recovery from the chaos created during ’Hunting Season’, the band file back onto the stage and close out with powerful renditions of ‘Only One’ and ‘Innocent’ before finally thanking everyone for the evening and leaving them thoroughly exhausted but happier and perhaps a little more wise for the musical education received.