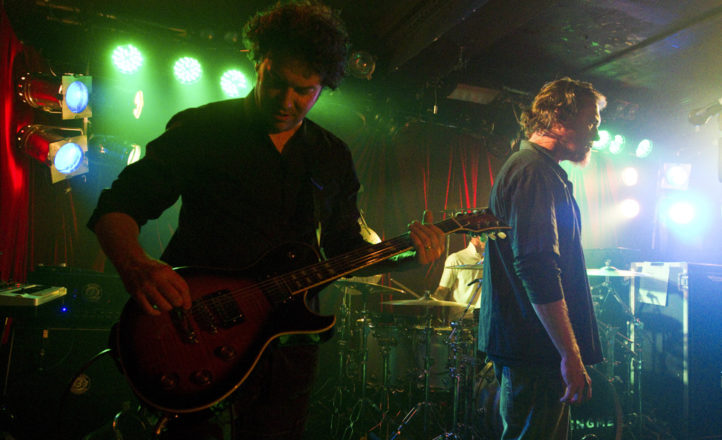 Friday night at the ‘Dale and I hit the bar for a beer to see the business end of the royal wedding on the big screen, missing all the fuss about Pippa’s arse. I was certainly not going to miss a top night of solid rock though, a promise that was one-third delivered by Red Remedy from the moment they hit the stage. Brash and loud, these guys have just enough of a progressive twist to make them stand out along with some killer hooks and a dynamic stage presence, particularly frontman Zach Evans. They are already making big waves locally and from tonight’s performance it’s easy to see why. If it weren’t for the stature of the other two bands on this bill, Red Remedy could have been headlining here and for many other acts they would have been a hard one to follow.

Melbourne’s Sleep Parade took proceedings into a more adventurously progressive direction and set the stage ablaze in doing so. The quartet’s songs unfurl through brooding atmospheric phases into explosions of sublime hard rock which they reflect physically through an energetic performance. Bassist Matt Delaney literally throws himself around the stage while Leigh Davies effortlessly tears strips from his guitar while simlataneously belting out the tunes, including some impressively high notes. Sleep Parade plays with incredible gusto for a progressive band and wind up the set with a huge crescendo that includes Davies holding his guitar up to his face and playing it with his teeth. You’d be forgiven for thinking that this was their gig tonight.

F L O A T I N G M E don’t project the same physical energy as the opening bands, but they command the stage with considerable gravitas as they open with “Deathless” and proceed to take the by-now well-attended room through the darkness and light of their album. Andrew Gillespie stands a little to the side of centre stage, staring intently at a point in the far corner of the room, delivering his lyrics with a deep emotional conviction. Behind him, Lucius Borich doesn’t just play his kit, he pummels it in a staggering display of controlled power reminiscent of the classic rock drummers who inspired him. Midway through “Bezhumous” Gillespie disappears and Borich launches into a truly breathtaking solo that the other members of the band – guitarist Antony Brown, bass player Jon Stockman and Tobias Messiter on the keys – sprinkle with splashes of their own. “Spirals” and “Sugar” provide further highlights but “Breaking to Breathe” is probably the pinnacle. The intimate “Short Cuts to Feeling”, which Gillespie suggests is so old “Jon hadn’t learned to play the bass when we started writing it”, is a stark contrast to the hard rock bombast. Scarymother’s “Tai Laeo” is peeled off for good measure before they end the set with an abridged version of “Across theGulf” which allows the whole band to shine. They could have gone on for hours and no one would have complained, but that was all, the end to an outstanding evening of Australian progressive rock talent.