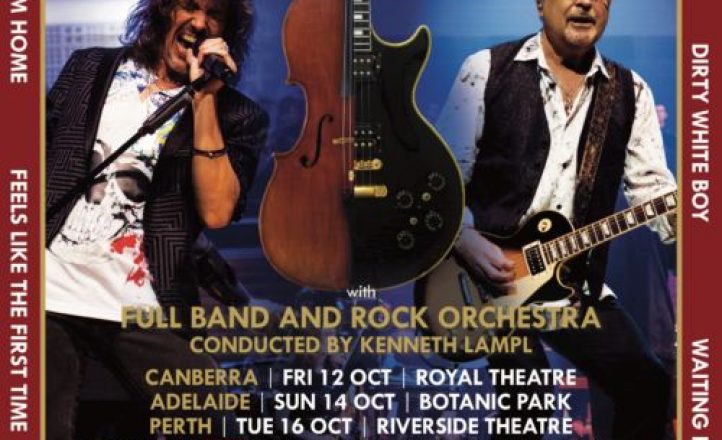 Foreigner recently celebrated forty odd years of existence as a band, project or whatever moniker is suitable. Today, co-founder Mick Jones runs the show, given that enduring co-songwriting vocalist Lou Gramm left  in 1990. In this instance, the current version of Foreigner is a well-oiled touring machine with some die-hard musicians adding to the power of some of FM radio’s greatest hits.

Fronting the band since 2005 is Kelly Hansen whose initial success came with the underrated band Hurricane. Add to that the energetic powering bassist in Jeff Pilson of Dokken fame who also effectively curates studio activity for Foreigner. The band also includes the wonderful multi instrumentation contributions of rhythm guitarist Thom Gimbel, hammering session drummer Chris Frazier, Californian rhythm and lead guitarist Bruce Watson plus funky keyboardist, Michael Bluestein. The compositional and arranging duo of cellist Dave Eggar plus percussionist Chuck Palmer on this occasion also added to the dedication of the project.

Additionally, tonight’s sold out concert at the Sydney Opera House Concert Hall was accompanied by an 18-piece Orchestra conducted by Kenneth Lampl. The show has toured the world and was first documented in a live DVD (Foreigner with the 21st Century Symphony Orchestra & Chorus) recorded in Lucerne, Switzerland and finally found its way to the Opera House. It was a cracker of a show and one that, even when this reviewer found a spare seat in the choir stalls behind the drummer and orchestra, was sensational to witness, with a plethora of radio hits in the 110 minute set list.

As the audience settled in and enjoyed an orchestral overture that referenced recognisable melodies from Foreigner hits to introduce the show, the band soon walked on stage and then, in perfect synchronicity with all those already on stage, launched into the strong opening track of ‘Blue Morning, Blue Day’ from their huge second album Double Vision, swiftly followed by ‘Cold as Ice’ with a nice keyboard solo and vocal harmonies that simply soared with the acoustics of the stunning venue.

Next was ‘Waiting for a Girl Like You’ with the melodic ear worm descending melody of the keyboard part walking the audience into the huge chorus sing along. Agent Provocateur track ‘That Was Yesterday’ followed with vocal harmonies pushed to a driving chorus against Frazier’s effortless drumming. The band were repositioned slightly for acoustic mode with a flute introduction from Gimbel for ‘Say You Will’ with Jones adding keyboard parts.

As an orchestral prelude took form, the title track from Double Vision provided a heavier rock sound with violins adding flourishes across the chorus. Since it was a 40th anniversary tour, Hansen led the crowd into a light-hearted retrospective adventure of tapping into the relative innocence of being a 70s teenager obsessed with FM radio and other activities to drag up memories of the era to celebrate longevity. It was an apt introduction to Foreigner’s first ever single, ‘Feels Like the First Time’ and as the floating keyboard line and opening riff ushered in the rhythm section, the crowd sang along.

The final track ‘Fool for You Anyway’ from 2009’s Can’t Slow Down album squeezed in some funk and made use of trumpets to add a rhythm and blues as well as soul music feel against popping chords. The song ‘Dirty White Boy’ from Head Games brought out some honky-tonk as Hansen ran around the stalls behind the stage and back again. The next two tracks took the performance up a level with two more tracks from 4.

As the keyboards and drums were spot lit, guitar soloing with wah pedal and delay effects hinted at the next track but it was that bass feel and Jones’ signature guitar riff plus some perfect saxophone playing that immediately revealed the classic hit ‘Urgent’. The song’s chorus breathes production dynamics brilliance and an extended saxophone solo melded into a bass cellist solo spot with everything from an AC/DC riff, a bit of neoclassical and some country hoedown jigs introduced the orchestral introduction for the huge hit ‘Juke Box Hero’.

As a set closer it was grandiose with arrangements to make it even more epic including Moog keyboard, a slow start of drums and cello toying with a country vibe before the vocals arrived to be bolstered by guitar riffing and sustained soling parts. A breakdown interlude post chorus allowed some call and response antics with the audience before a chordal vamp allowed trade-off guitar solos and harmonised parts before returning to the song’s chorus. It was a suitable end to a main concert set.

The two song encore was beautifully choreographed. ‘I Want to Know What Love Is’ was pre-empted with a request for smart phones to be used as a cigarette lighter alternative as mega selling power ballads require. The phones lit up the venue and seeing that illumination from behind the stage as such a definitive hit song was played was indeed a rare moment.

The addition of a well-rehearsed and capable school orchestra (from Barker College) to the backing vocals was succinct and tastefully arranged. Hansen then spread his evangelical healing spiel, encouraging audience members to puts arms around one another and to ‘spread love around this place like Vegemite’ to replace problems, issues, situations and negative feelings with the musical groove. Each to their own but with the thanks over and the seventies jazz vibe narrowly avoided, the song resumed to the recognisable keyboard figure and unmistakable big pop chorus.

The final song was ‘Hot Blooded’ from Double Vision,  probably the album that sold truckloads to allow Foreigner to first tour places like Australia back in 1978. At this point, the orchestra vacated the stage and as such, Foreigner played as a tight rock band unit with delivery reminiscent of bands such as Free. It was great pop rock from the seventies. The audience sang along and danced to the spaces in verses before the outro solos allowed for more bluesy improvisational parts to unfold. Foreigner are virtually untouchable after this concert. It was a real treat to experience this event and they truly exceeded expectations. Magnificent.
Overture [intro]
Blue Morning, Blue Day
Cold as Ice
Waiting for a Girl Like You
That Was Yesterday
Say You Will [acoustic]
The Flame Still Burns [acoustic]
Prelude [orchestra]
Double Vision
Feels Like the First Time
Fool for You Anyway
Dirty White Boy
Urgent
Juke Box Hero

I Want to Know What Love Is
Hot Blooded.