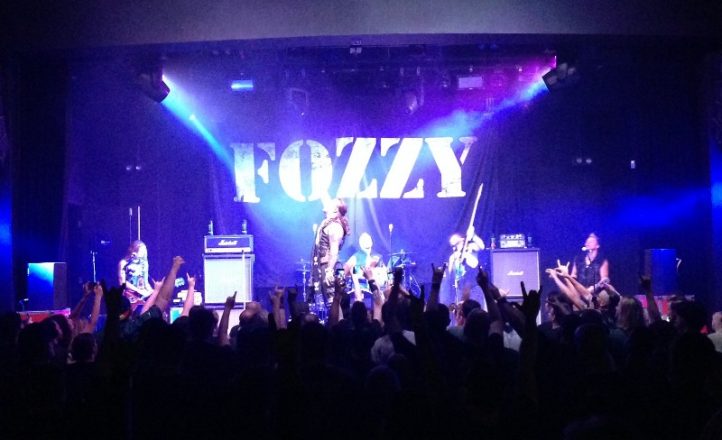 Last here as part of a nationwide Steel Panther tour in 2013, it has been far too long since Fozzy were in Australia but they were keen to make up for lost time. Jericho was enthused from the start of the show and even though Fozzy took a dip in attendances thanks to Def Leppard being in town on the same night, nothing would deter Jericho from delivering some good old fashioned entertainment.

Sadly, timing mix ups meant that this reviewer was late to catch tonight’s first support act to only catch the tail end of Sydney based punk four piece band Molly and the Krells. However, they looked to be pretty much no nonsense in their approach before the venue PA cranked out some Soundgarden and Skynyrd’s ‘Free Bird’.

The next support was Kvlts of Vice who morphed the visual aspects of The Cult in their earlier days with the more falsetto based hard rock of say Skid Row plus more than a hint of Nick Cave’s cool menace. Decked out in a coat and vest, front man Jordan Von Grae had the mannerisms and rock moves mapped out including phallic gesticulations. Guitarist Odin Wolf spiced up his playing with some wah pedal whereas some finger style bass from bassist Tory Giamba worked well with Tomas Bateman’s solid shuffle rock drumming during their as yet to be released new single ‘Life’, which got an airing. Amongst new tracks played this evening, they also snuck in a reputable cover of ‘House of the Rising Sun’. In some respects, the set kept going with their small but core fan base as the band cleared their gear yet offered up dance moves to the disco hits on the PA such as ‘Get Down Tonight’, Funky Town’ and ‘Dancing Queen’.

The Fozzy crew was organised to a tee with the monitoring, front of house and lighting all set up quickly to good sound level with the aid of technology and preparation. ‘High Voltage’ cranked over the PA to introduce the approaching Fozzy performance and while the band took up their positions, a remixed version of ‘War Pigs’ played.

A green lit stage for ‘One Crazed Anarchist’ from Do You Wanna Start a War featured heavy drums and some hard rhythms with a high pitched effect guitar solo from Ward. More drumming power ensued in double kick drumming during the Sin and Bones title track with Jericho chest thumping before a chant started up as he addressed the audience to adjust his belt.

Newer heavy groove track ‘Burn Me Out’ provided some audience VIPs onstage access, jumping about plus a quick Happy Birthday sung to Jericho as more frivolity continued with ‘Painless’. Soon enough they played ‘Spider in My Mouth’ from Sin and Bones with Jericho sporting an amusing jacket with sparkling lights. They provided just the right amount of self-deprecation to provide both comic relief and entertainment without it being clunky even if it was choreographed. The big, hitting chorus again benefitted from a powering rhythm section with swift double kick drumming.

Continuing with his naturally playful persona, Jericho ran amok on the stage with a smoke machine gun during ‘Do You Wanna Start a War’ before more silliness yet genuine musical appreciation came with the rendition of Abba’s classic hit song ‘SOS’. The sustained chords worked well in the cover and had Jericho instigating clapping. The next two tracks really showcased Wards guitar abilities. ‘Wolves at Bay’ from Judas was heavy with a couple of ripping solos from Ward but it was the next song ‘Enemy’ from All That Remains that saw Rich branch out into what was almost a solo guitar spot. Starting slowly, as it sped up he was soon diving backwards into the audience to crowd surf before returning the centre stage platform and trilling notes perfectly with added wah pedal control.

To close off the set, a cover of AC/DC’s ‘T.N.T.’ was apt and allowed Jericho more comical hijinks at the song’s completion when advising of the encore. Staying on stage and poking his head out from behind a towel and then back, Jericho was in his element, entertaining and poking fun at the rigid rock traditions. Closing the show, the band gave Sin and Bones track ‘Sandpaper’ a solid kicking. Jericho was off his platform with scissor kicks and on return, still in time with the band’s impressive vocal harmonies and unmistakable rock groove. Hopefully Fozzy will return to Australia when Def Leppard are not in town but for those present at tonight’s show, it was a fun night and done professionally.

Judas
Drinkin’ with Jesus
One Crazed Anarchist
Sin and Bones
Burn Me Out
Painless
Spider in My Mouth
Elevator
Do You Wanna Start a War?
SOS
Lights Go Out
Wolves at Bay
Enemy
T.N.T.
—
Sandpaper