Home > Live Reviews > At the Gates, The Haunted & Witchery 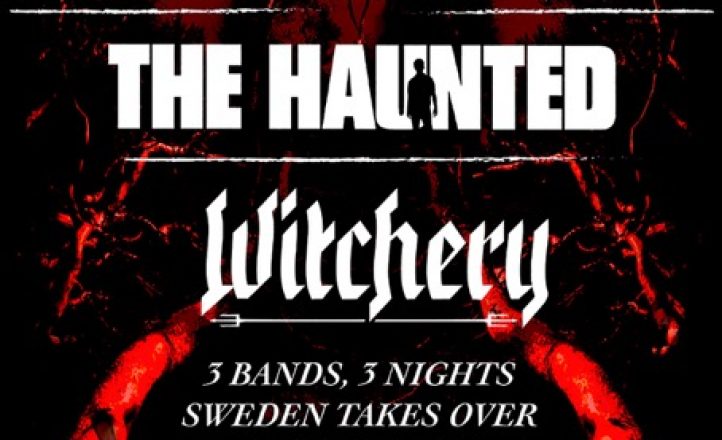 Doors opened at the Manning Bar considerably later than expected, which truncated five piece Sydney support band Lethal Vendetta’s thrash metal set. They also had borrowed bassist Aaron Cliff from Hazmat this evening but all things considered, the fifteen minute set warmed up the room as they kicked things off with ‘Final Conflict’ from the No Prisoners No Mercy album. Vocalist Brent Logan’s Anthrax styled singing had a dash of falsetto and vibrato, especially during ‘Salute to the Gods’ whilst Ben Drennan’s slicing guitar rhythms cut through the mix. The driving thrash was punctuated by Morris Markovic’s powerful drumming with plenty of rapid fills as lead guitarist Liam Donelan peeled off quick solos between synchronised thrash riffs. Their three song set was concluded with the fast thrash of ‘Liars Dice’ which offered up a pummelling track.

As set changeover times were compressed, the stage was cleared quickly to reveal a large drum kit with plenty of cymbals and a couple of large kick drums. It was going to be a loud show and with the looming At the Gates backdrop, there was added atmosphere with signature arched gates artwork derived from the band’s logo and with the ornate album cover peering through.

Witchery were soon on stage and the five piece, fronted by a corpse style face painted Angus Norder in black vest and coat, set the tone for some blackened death metal as they launched into the brooding ‘True North’ from I Am Legion. Guttural vocals were in order but the pace soon quickened with next track ‘Nosferatu’ from In His Infernal Majesty’s Service in which new drummer Chris Barkensjö’s drum skills were evident.

Delving into earlier material, ‘The Storm’ from Symphony for the Devil hammered by at pace. Touring bassist Victor Brandt windmilled, headbanged and held his bass aloft during subsequent tracks which included the relentless, Slayer-esque ‘Witchkrieg’, early fast track ‘Restless and Dead’ and fierce newer album tracks such as ‘Lavey-athan’ and the time changing mastery of ‘Oath Breaker’ before Jensen was centre stage to play the opening riff of ‘Of Blackened Wing’. The melodic death metal styled riffs in early career track ‘Awaiting the Exorcist’ hinted at things to come with The Haunted. Of course, after the intense early EP track ‘Witchburner’ saw pile-driving snare drumming and tremolo fast guitar soloing, the almost forty minute set was concluded with their classic debut album track ‘The Reaper’ as tight rhythm guitar parts synchronised with blasting drumming against strobed lighting effects. As far as sheer intensity goes, Witchery were blindingly brutal and it was impressive to watch the drumming stamina throughout their set.

Another drum kit sound check followed to prepare the kit for Adrian Erlandsson who was soon to be doing double duty, as was Patrik Jensen on rhythm guitar. The room filled up even more as The Haunted soon appeared with their set with the brief melodies of ‘Fill the Darkness With Black’ before the blasting ‘Brute Force’ delivered just that, musically speaking. Jensen and lead guitarist Ola Englund occupied stage right and stage left respectively whilst jersey sporting front man Marco Aro barked his vocals from centre stage, occasionally jumping onto a central raised platform and thanking the crowd with outstretched arms.

The brutal ‘99’ included guest bassist Victor Brandt filling in for the absent Jonas Björler and also saw Englund in fine form for guitar soloing. ‘Trespass’ from Made Me Do It followed with uncompromising speed as Aro’s vocals screamed over the tightly performed music which changed pace and offered great dynamics, showing why melodic death metal actually works. A couple of tracks from The Dead Eye set the seemingly obligatory circle pit off in a savage way. ‘The Flood’ had Erlandsson’s drumming leading the charge through the song’s changes to segue perfectly into the death metal of ‘The Medication’. Aro was more energetic Aro compared to the last tour, announcing that The Haunted is ‘ a band that plays heavy metal’ to start off the slight groove based metal of ‘Preachers of Death’.

The Haunted were brutal this evening with a punishing fifty minute set and seeing the band work together with a unified approach despite missing a key member was certainly inspiring.

Appearing mainly as a four piece, Erlandsson was again at this drum kit for a second set of drumming. Vocalist Tomas Lindberg casually wandered on  as the band began their set with latest album title track ‘To Drink from the Night Itself’. Waving his microphone stand and inverting it to the audience, punctuating drum beats with it, Lindberg led the charge through a couple more album tracks including the ‘At War With Reality’ and then introduced Englund filling in on bass for the classic track ‘Slaughter of the Soul’.  Melodic guitar solos sang whilst the snare drum pounding was perfectly executed amongst the time changes with the clean guitar parts ringing out nicely as rhythm guitar parts sustained chords.

Soon returning to four piece mode, the scooped rhythms of ‘Cold’ were followed by new album track ‘A Stare Bound in Stone’. Lindberg added ride cymbal strikes to embellish the excellent drumming. Tracks from At War With Reality followed such as the solid metal of ‘The Circular Ruins’ with tasteful guitar soloing and the varied flow of the heavy track ‘Death and the Labyrinth’. Next, two tracks from the latest album with some haunting clean guitar parts juxtaposed with distorted tremolo guitar rhythms bookended the classic album track ‘Under a Serpent Sun’.

Using atmospherics to introduce the encore, it was soon enhanced by Englund on bass to help add live bottom end to Slaughter of the Soul tracks ‘Suicide Nation’ and ‘Blinded by Fear’ with Lindberg waving his microphone stand around. Ending tonight’s mammoth show, again as a four piece, a hypnotic chiming guitar pattern and harmony guitar parts within ‘The Night Eternal’ soon gave way to blast beats and a fast circle pit response.

Tonight’s triple bill of Swedish melodic death metal was a brilliant show and all the bands played with great skill and sheer professionalism especially considering there was unfortunately an absent band member for two of the bands. At the Gates played for close to eighty minutes and did so with minimal banter. Hopefully similar themed tours can occur again as this was a real treat for both old and new fans of melodic death metal with some classic seminal material played live.