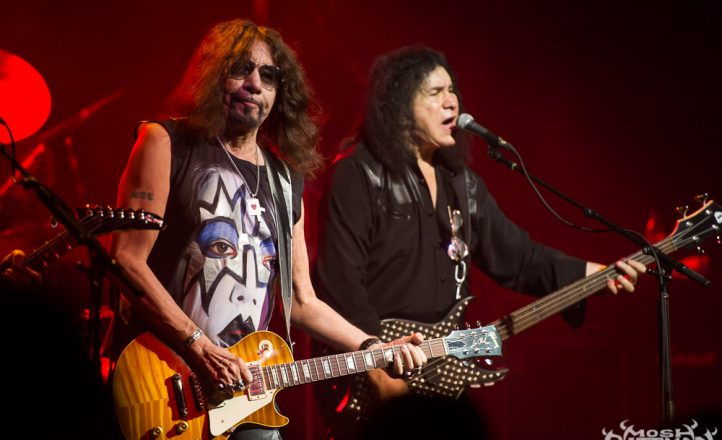 Kiss fans are incredibly loyal. When tickets for the Gene Simmons Band tour initially went on sale, they were heftily priced which given that the production was clearly not going to be on the same level as a Kiss show extravaganza presumably didn’t help move vast quantities of tickets. No doubt various background machinations then led to a discounted option for tickets plus the addition of ex Kiss guitarist Ace Frehley to the bill. As a result, the Enmore was suitably well packed. Kiss and especially Gene are masters of merchandising as evidenced by promoting his own Gene Simmons Vault box set on the tickets. As for the show itself, that was a real treat because both Frehley and Simmons, knowingly bolstered considerably by Gene’s band, did provide quality performances with plenty of obscure tracks that would never get a look in on a standard Kiss tour set list.

The show was co-headlined with no support act so there were still people filing into the venue as Frehley and band entered the stage, opening with ‘Parasite’. The entire band covered backing vocals making a huge difference to pushing the chorus when Frehley sings. To be fair, Frehley is a guitar legend who was in a band with Paul Stanley; arguably one of rock’s greatest front men so no one was there expecting him to deliver anything even close to a four octave range of singing prowess.

Frehley delivers with pure grit and attitude in his playing as well as with his singing. His Gibson Les Paul signature guitars are also visually stunning and produce a warm guitar tone that is clear with punch. The shared backing band featured Philip Shouse on bass while Frehley but guitar when backing Gene, guitarists Ryan Cook and Jeremy Asbrock with the latter looking very much influenced by the late, great Randy Rhoads and on drums, Christopher Williams who is also Accept’s drummer clearly enjoying playing Kiss and Frehley tunes with Frehley himself.

Those who caught Frehley touring Australia recently with Alice Cooper would be familiar with the set list and Frehley ‘s approach plus the fact that he throws out innumerable plectrums to the audience during his set. He seemed a bit more relaxed on this bill though and presumably that was a result of the sea of Kiss fans in the audience responding to his every move. This was indeed a rock show and so it was loud but it was clear with a great audio production. Frehley just played and enjoyed himself, grinning through his sunglasses, wearing simple jeans, t-shirt and for a few songs, a plush velvet jacket.

Some tasty unison bends during the solo for Stones track ‘2000 Man’ and crowd sing-alongs then led to ‘Rock Soldiers’ with great backing vocals from Asbrock plus plentiful call and reply styled guitar solos during the next track of ‘Rip It Out’, the first track from Frehley ‘s 1978 solo album, Ace Frehley. The pure rock attitude still rang true as to why that was the most successful solo album of the four Kiss solo albums from back in the day. The guitarists surrounded the drum kit during the solos sections whilst for ‘Love Gun’, which was sung by Shouse, Ace peeled off the guitar solo flawlessly. It is a simple solo with high vibrato – a true rock classic.

He thumped his guitar through the rising solo of ‘Rocket Ride’ whilst during ‘Strange Ways’, Williams took on vocal duties as Frehley delivered another solo with plenty of signature technique. Naturally, the flashing lights guitar was in use during ‘New York Groove’ with plenty of audience sing-along. A smoke bomb fitted guitar was used for Frehley’s extended solo during ‘Shock Me’ which almost fell over in a welter of feedback and delay before the song itself resumed with a guitar changeover.

Cook covered the vocals for ‘Detroit Rock City’ and Frehley led the harmony guitar parts on his quilted maple top Les Paul guitar as the other guitarists joined in. Closing the set with ‘Cold Gin’, the crowd pretty much sang the chorus back at the band in full voice. The band put in a top notch performance with some amusing banter from Frehley thrown in. He appeared genuinely happy.

After a brief interlude, Gene Simmons’ set commenced and he strode onstage with the attitude and swagger that only a certifiable rock star can muster and ripped into ‘Shout It Out Loud’, followed by rare 1981 track ‘I’, enthusiastically backed by his band. As the stage changed colours from purple to blue and red, Simmons, dressed in all black including leather pants and black sunglasses, stood behind his mic at centre stage whilst playing his sleek black and white chequered bass guitar, picking out booming bass notes with his right hand. To his right was Shouse while Asbrock and Cook played from the other side of stage until they all moved around repeatedly. Gene essentially had three guitarists joining him onstage and utilised their lead guitar playing skills as well as obtaining a wall of sound rhythm guitar sound when they all played in unison.

Simmons’ between song humour was generally witty, albeit in the variety of a Dad jokes, in-jokes about being ‘powerful and attractive’ or the occasional mimicry of Peter Garrett’s vocal style, yet he was able to affectionately bag out the indecipherable bursts of verbiage from over excited fans. Other cheeky puns such as ‘thank you for giving me the clap’ after performing a song don’t need further explanation. During the big chorus and AC/DC styled chord stabs of the ‘Are You Ready’ from Gene Simmons Vault, he briefly played a signature axe shaped guitar for one financially charitable audience member to be later collected.

The guitarists put on a show, duck walking across the stage and trading solos but also generated a thumping guitar sound with three guitars playing the same riff together during ‘War Machine’ against hard hitting drums. Simmons would occasionally step back from his microphone and mimic walking around in his Kiss platform boots, stomping and leaning from left to right.

Simmons vocal attack is almost at a shouting level although he can sing with harmony and melody plus do so when playing fairly solid bass lines with some elements of intricacy. He is certainly not a slouch at his instrument by any means. By way of introducing his band’s talents, a cover of Little Richard’s ‘Long Tall Sally’ was trotted out deftly seguing into a rendition of Led Zeppelin’s ‘Whole Lotta Love’ solo section and into another classic rock’n’roll track. For ‘Calling Dr. Love’, the backing vocals added extra power as did a quick guitar solo from Asbrock as he ventured out to the front of the stage.

‘Charisma’ enabled Simmons to indulge in singing about his ego with some possibly self-deprecating pre-song banter as well as plenty of repetition of the chorus. To involve the audience further, ‘She’s So European’ became ‘She’s So Australian’ once the option was approved with applause. It was also cool for old school fans to hear the early days instrumental of ‘Love Theme from Kiss’.

The guitar solos during ‘Let Me Go, Rock ‘N’ Roll’ and ‘Watchin’ You’ would have been a set highlight if not for ‘I Was Made for Lovin’ You’. Lillye vocalist Virginia Lillye joined the band and frankly nailed it with a vocal performance that hit every single note that Paul Stanley could hammer out when he was at the peak of his powers. For a song created to capitalise on the popularity of disco, Lillye smashed it into a rock track with soaring vocal power and stage presence.

A decent number of female fans were invited up onto the stage to sing-along on ‘Do You Love Me’, with Shouse covering vocals.

Of course, in these enlightened times, a selection of male fans were invited on stage to assist with backing vocals for ‘I Love It Loud’. ‘Plaster Caster’ closed out the main set with some simple rock guitar parts.

Going straight into the encore, Simmons brought Frehley onstage. Sporting a large sleeveless shirt of the Spaceman’s make up persona, Frehley strode on casually to play ‘Deuce’. Frehley’s recognisable opening riff had the crowd cheering as did his expressive guitar solo parts. The crowd of course sang-along and continued to do so throughout final track of the night, ‘Rock and Roll All Nite’. All stage guests were invited back, Frehley playing with minimal fanfare, focussing on his guitar parts as Simmons looked on with a wide grin.

The interactions between the pair looked perfectly comfortable such that any of the tension from years past appears to be long gone. Kiss fans would have been very happy with tonight’s performances, especially with the variations in the set list and the overall enthusiasm of both Ace Frehley and Gene Simmons.

Gene Simmons:
Shout It Out Loud
I
Are You Ready
War Machine
Long Tall Sally (Little Richard cover)
Calling Dr. Love
Charisma
She’s So European
Love Theme from Kiss
Let Me Go, Rock ‘N’ Roll
I Was Made for Lovin’ You
Do You Love Me
Watchin’ You
Radioactive
I Love It Loud
Plaster Caster
Deuce
Rock and Roll All Nite.