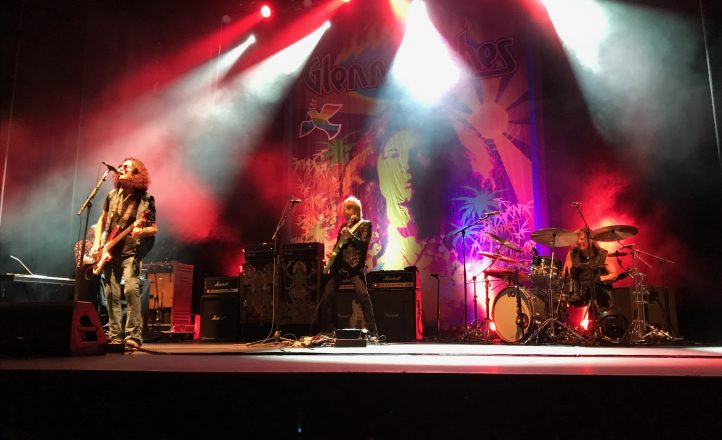 Special event is a term that perhaps gets thrown around a little too liberally at times and means different things to different people. Glenn Hughes assembling a team of top notch musicians to revisit some highlights from his tenure with Deep Purple Mark III & IV, to these ears, has all the hallmarks of something substantial.

Hughes has nodded to this period of his career with the odd song appearing in solo shows throughout the years but a Australasian only tour playing a full Purple set – yes please !

One of the keys to a night like this is the opportunity to hear infrequently, if ever, played songs from a golden time of real invention that laid the foundation stones of heavy rock. Time increasingly tells us of the diminishing opportunities to reconnect with the great songs of history, played by our heroes as those originators of the music we hold so dear are unfortunately but inevitably coming to the end of their rocking road.
Tonight the State Theatre offers opulent surroundings for this rather special evening and the healthy crowd in attendance are buzzing with expectation.

The band take the stage under the cover of darkness, as the drums and keys lead the way the band kick into a thunderous rendition of ‘Stormbringer’ and it’s clearly evident all the required elements are firmly in place. Starting off with one of the requisite bookends of the setlist leaves no doubt that we are in for a night of musicianship of the highest order. The organ runs, the exotic tones of the guitar solo, Hughes wielding a massive Rickenbacker as part of a brutally solid rhythm section, this is a belting reinterpretation of a stone cold classic, minus of course a bit of Coverdale baritone and some of Paicey’s swinging finesse on the tubs. An exact replication is not the goal here, this is not the original band and this is not Cal Jam ‘74. Paying tribute to the original material is important and justice in that regard is certainly done but equally there is a fierce display of the abilities of the individuals onstage tonight.

The stabbing keyboard intro to ‘Might Just Take Your Life’ is a signal of the special nature of tonight’s setlist and when local boy Lachy Doley explodes into the B3 section of the track pulses are raised and smiles abound. ‘Sail Away’ sends us on a joyous journey and further underlines the unique nature of the song selection for tonight’s performance.

The Stratastic efforts of guitarist Jeff Kollman are entirely appropriate, mixing his own fiery spirit of adventure with the classic plucky tone of the two legends he is interpreting proves to be a great combination and as he bends the unmistakable intro to ‘Mistreated’ we are set for a classic blues tale of epic proportions with a distinctly purple treatment.

Drummer Pontus Engborg comes to tonight’s show as the current thumper in Glenn’s solo band and he is belligerent on his pared down DW kit. Although some of the swinging intricacies of the Ian Paice original material may be a little smothered by his rampant go forward this is a super solid outfit and with Hughes locked in on bass the rhythm section lays a great platform for the necessary jamming improvisation and soloing elements this performance must have. As a 12 track set becomes a 2 hour show this air of freedom and experimentation is an integral part of the success of the evening.

‘You Fool No One’ is a groovy syncopated powerhouse and ‘This Time Around’ gives Glenn the opportunity to stretch out and add the emotive reaches his incredible voice can inhabit. Effortlessly soulful, rocking, heart wrenching and inspiring, he never fails to astound with his dynamic range and effecting delivery.

Decades on from a previous life of excess Hughes exudes a compelling life force, he now presents as a vessel of love and humility and in his between song stories he speaks warmly of his time with Purple and implores the crowd to appreciate and look out for each other in a heartfelt and genuine way.

‘Holy Man’ is another nugget from the mists of time, one of the quieter moments that serves to punctuate the set and as we blast into ‘Gettin’ Tighter’ another box is ticked in the Hughes, Purple period dream setlist.

An inevitable, if a little unnecessary given the writing credit, ‘Smoke On The Water’ goes down a treat with the crowd but is quickly eclipsed by ‘You Keep On Moving’. It’s not often in my book that the keyboards provide an indelible highlight to a rock show but my lordy this Doley is good, this not often heard track allows him an opportunity to shine and he sends shards of analogue omph through the PA that recalls the power and majesty of the original material and does real justice to its writers.

‘Highway Star’ sees them again paying tribute to the broader lineage of Purple with a piston like, lively urgency and when finally ‘Burn’ appears with all its fire and brimstone, it is thrilling in its bombast, emphatic in its delivery and the only closing chapter imaginable to bring this memorable evening to a fulfilling conclusion.

Over a post show drink a guy tells me he had many emotional moments during the show, no arguments here. A rare and special event indeed !