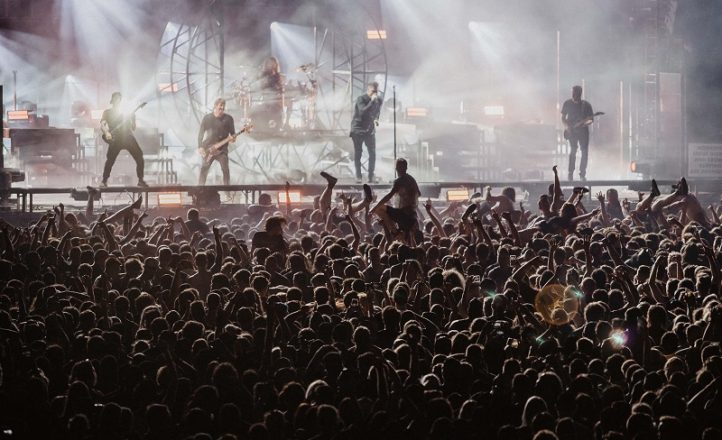 A festival like Good Things isn’t typically my cup of beer but when Big Ed said he wasn’t going to make it and could I do a review instead, I thought why not ? Lucky I already had a ticket this time, because there was a few good bands playing today like Bad Religion whom I missed last time and I haven’t seen the ‘Vool for a while. Plus any chance to see Parkway Drive these days is worth the effort. Besides, who doesn’t want to go to an all-day music festival when the city is literally choking to death under a pall of smoke?

Finishing off a couple of American Serve JD and Cokes on the way, inside the gates the festival was full of people much younger than me dressed more like they were at the beach, and there was plenty of cops with dogs around looking for underage girls to strip search in between moments of crushing ennui, wondering how their lives got to the point where they can no longer even act like reasonable human beings.

On the way to the main stages I noticed Ice Nine Kills were playing and figured I’d give them a look in. They’ve got some horror movie theme gimmick thing going on which makes them look like a metalcore version of Wednesday 13 and at least adds to their visual impact. Despite their music being barely more than standard metalcore fare I actually didn’t mind them, so kudos to them for being good live.

I couldn’t really figure out why the fuck the Veronicas were doing on this bill – until they came on. Embracing what looked like some modern version of heroin chic, they actually rocked the fuck out of this festival, even bringing the dude from The Used out of his beachfront mansion to join them. And then, Holy Shit – they instigated a motherfucking wall of death! I was so stunned I almost forgot The Butterfly Effect were on across the park. Here’s a band that combines decent heavy riffing with soaring melodies and an apparent dysfunction that makes them split up every eighteen months, and somehow distils it all into a strong live chemistry. I don’t know why they were on so early especially when Falling in Reverse were laughingly bad when they came on later. And I do mean laughingly. I haven’t laughed so much at such a display of a group of dudes pretending to be a band since I laughed at Scott Morrison pretending to care about that old bloke whose farm got burned down up the coast, and that wasn’t funny either. Or a band.

There’s no way I can take a band called Dance Gavin Dance seriously, so I managed to grab something approximating a beer and went to see Trivium. Over the years these guys have gone from Metallica-lite pseudo thrash that was still kinda cool to slick and boring melodic rock with muted riffs, but live they’re fun. I wasn’t sure which version of Trivium we were going to get and it turned out to be about two-thirds new and one-third old, but I had a buzz on and if nothing else they simply love being on stage. Beaulieu throws his guitar around like it’s a toy and Heafy does his Maori warrior tongue-poking thing a few times and they churned out enough of their heavier tunes like Down From the Sky and Pull Harder to make even a cynical old fuck like me happy.

My head was telling me to go check out Voyager because I wanted to see how their fucking weird mix of metal and Depeche Mode comes off live, but Bad Religion came on and I lost my shit. I don’t really know how the kids around me were reacting to a bunch of dudes older than their dads punking it out up on stage, but I couldn’t have cared less. When 21st Century (Digital Boy) started, I just went back to being a 20-something idiot going nuts at punk gigs. This was probably the highlight of my day. I was as happy as Peter Dutton at a Gestapo re-enactment festival and their set whizzed by with Graffin unloading his bile on the establishment as the riffs blazed away. Fuck the Apocalypse… This is Hell seemed like a fair statement considering the whole eastern seaboard was on fire.

Now I had a choice between Simple Plan or Falling in Reverse, or a bit of a feed and more booze. I went for the third option and found myself seeing most of Falling anyway, as I said earlier.

Thy Art is Murder always surprise me because even though they sound like they’re just playing the same two or three songs over and over again, I’m into it. Maybe it’s the way the weight of their music just pummels everyone into not realising how repetitive they are, or something, but it works. I’m not sold on CJ’s hoodie-chic thing and I’m never quite sure if his rants are sincere or designed to incite violence, but it doesn’t matter. It’s what he does. There was savage moshing and circle-pitting too, but of course there was.

Karnivool’s set was a bit more sedate, the old blokes of Aussie prog going for a set studded with hits. It’s not difficult to do that when pretty much every song you have is staunch. I talk shit about a lot of bands, but Karnivool are actually fucking great and when they can come on and command a stage the way they do when they haven’t played for a donkey’s age, it proves my dedication is well-founded. I wasn’t sure I was going to hold out for the headliners but the ‘Vool got me over the line. The triple punch of Roquefort, Themata and New Day probably got me there.

A lot of people were giving Good Things shit for putting Parkway Drive on as headliners. Well, those people are fucking dickheads. Seriously, if you think that playing at the top end of bills in Europe that have bands like Slayer and Korn on them isn’t enough for headline status in Australia then you’re a small-minded fuckstick. Can you name another heavy band from this country who should have got this slot instead of them? CAN YOU? No, you fucking can’t.

So here it goes for you assholes – I love Parkway, always have, and while I’m as stunned as anyone that they’re one of the biggest metal bands in the world right now, more fucking power to them! Wishing Wells fired up and the song was all of a minute old before everyone here knew who’s festival this was. These guys bring so much to the table now that the table has to be enormous for it all to fit – gantries, ramps, a massive fucking rotating drum cage, even a strings section. No one – no one – in Australia does this sort of shit live on stage, and they have the stuff to back it up too. Prey, Carrion, Vice Grip… The Void is enormous, Absolute Power crushes the fuck out of everything. Parkway Drive are on fire, and then they suddenly look like they really are on fire! There’s flame coming from everywhere: the stage, light gantries, towers in the middle of the crowd. I’m not sure about the wisdom of exploding so much pyro when the city could be literally burned to the ground by bushfires at any moment, but it looked fucking spectacular. I’m a hard guy to please if you haven’t realised. Parkway made me rethink everything about what I want from a live band, so if you don’t have forty foot high metal contraptions everywhere and more fire than the Abyss itself, don’t get back to me until you do. Or at least be good.

Most of the things at Good Things were pretty good. A couple were pretty shitty, but at least they were kinda funny. The climax was off the chart. I’m not going to finish off by saying how great next year will need to be, because we already know that and who knows, Gladbags will have probably banned all live music in NSW by then so there might not be one. Enjoy it while it lasts and get rid of her as soon you can.