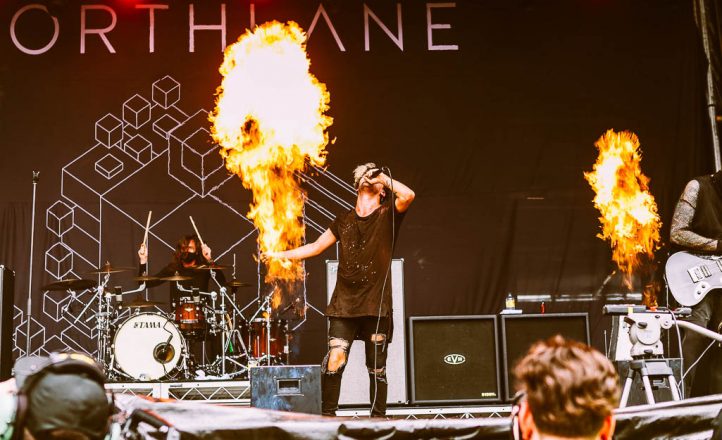 Ahh yes, summer in Australia. It must be time for a festival in the scorching hot sun with nothing more than (hopefully) good sunscreen and a hat between you and one of the hottest countries in the world.  Seems as always that sensible clothing is optional (along with the sunscreen) because geez did LOUD see some well burnt people as this day wore on, despite the organisers ensuring plenty of sunscreen stations and water stations were around. But enough of the uncool Dad chat – you are not here for that. Let us get beyond my mere musings and into the pit!

The plan for the early part of the day was looking into bands this intrepid music lover was not aware of, or had only heard rumblings of through the teen tag-along with us on our journey. Kicking the Brisbane date off with a bang is local pop-punks Stateside, doing the festival opening slot justice as they interact with a slowly filling venue.

The short walk between main stage (Stage 1 and Stage 2) set up and the secondary stage (Stage 3 and Stage 4) setup meant that we could look in on Melbourne act Ecca Vandal to see why she has been getting a good rap in the alternative scene. Like Stateside, the band put all their energy into entertaining the small but assembling masses, with the advantage of being under cover attracting more punters.

Melbourne Hardcore crew Void Of Vision are the first band to bring a genuinely heavy sound to the stage as they blast through their set and entice the crowd into several random circle pits of complete chaos. Then a short walk back to Stage 4 to check out British band Boston Manor on their first visit to Australia. This band has a sound that feels similar to the newer Bring Me The Horizon although with roots in English Hardcore that has the crown surging back and forth.

The first bigger band of the daym, Northlane, take to stage one amid flame cannons shooting from the stage helping to heat the pit into a frenzy. Vocalist Marcus Bridge directs traffic and acknowledges the heaving pit that is highly energetic in the hot Queensland afternoon sun before the band finishes in an explosion of purple confetti that follows us as we take the walk once more back to Stage 4 for Western Australia’s Make Them Suffer.  They persevere with an early muddy vocal mix to come out as the band of the day so far with their massive modern deathcore sound, even having girls up the back of the tent dancing away as they wait for Palaye Royale, band we missed because it was (apparently) my duty to catch me some Babymetal.

I am the first to admit that I missed the huge ship that is Babymetal. A band play some great modern metal as three young Japanese ladies dance in highly choreographed dances  and singing in a register that at times would surely upset any dogs local to the venue. I am willing to bet this music is a great gateway to get many people into heavier music, but I still cannot swallow the sugary sweet gloss on it. Maybe I am just a grouch.

As if to prove my unwillingness to try certain aspects of new music, a quick look in on the start of the Scarlxrd set barely lasted the first verse. My offsider looked at me taking harsh notes of whatever you call what this band were playing, meekly apologising with ‘I didn’t think the cool name would mean shit music’.

At that we were sent wondering back to check out The Used, a band I will admit to never really enjoying on record before. I may have even been overheard through the years talking of my disdain for the band and the character that is lead vocalist Bert McCracken. Happily I can say that live The Used certainly brought positive vibes through their emotionally volatile music. Special mention to a play through of the Play School tune, and a red hot and short rendition of Nirvana’s ‘Smells Like Teen Spirit’ that ends the  set on a high.

Bullet For My Valentine is another band that I have tried several times for no real pay back, and today is no different. They play on Stage 1 as huge crowd assemble in front of them and Stage 2 awaiting one of the bigger draws of the day, The Dropkick Murphys. At my insistence, the teen tag-along and I are pushed hard against the barrier for one of my personal favourite bands as they come bounding out on stage. Vocalist Ken Casey is currently unhindered of bass duties and bounds around the stage with co-vocalist Al Barr as they tear through a set that covers material old and new as you would expect at a festival event. The vocalists take turns in coming down to the barrier and singing with us, and Ken Casey more than once goes over the top of the barrier and into the baying crowd.

Back down to Earth with a thud as we agree to check out Emmure.  The band hold the small crowd in the palm of their hand as they cut through a bruising set of very standard form deathcore. We should have checked out more of All Time Low…

Time for the big guns…

Stone Sour come bounding out and jump straight into “Taipei Person/Allah Tea”, throwing the gauntlet down to headliners The Offspring for biggest band of the day. Corey Taylor runs around rather dangerously with a streamer cannon as they play through the hits. Taylor proves yet again just how versatile he is as a vocalist with an almost a capella version of  ‘Bother’ and follows up a little later with ‘Through Glass’ before finishing on ‘Fabuless’ off the newest release.

The intro tape for The Offspring plays “Ahh time to relax…” and the young punk in me comes to the fore, grinning ear to ear as the band rip into their Smash album complete, although leaving biggest hit ‘Self Esteem’ out of the running order to play at the end.  As the crowd begins to disperse, the Offspring return to plays through a greatest hits set with the highlight being a cover of AC/DC’s ‘Whole Lotta Rosie’ and a ripping rendition of ‘The Kids Aren’t Alright’ that seems more on point and angrier 20 years later.

And with that we leave, well worn out, but happily un-sunburnt. A welcome return to festivals in Australia after a couple of years without, here is hoping this one can stick around for a long time, not just a Good Time.