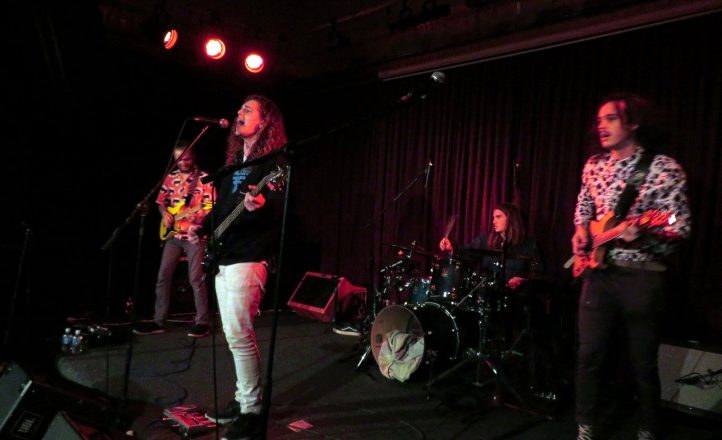 Displaying musical might as new offspring of prog-jazz-fusion amongst other rich elements, Grill and Motherfunk’s chemistry sizzled through a tight yet expansive show at Katoomba’s Baroque Room on May 26. The show was a date along the tour named after Grill’s debut album The Eternal Presence and was already defined as a night of forward-thinking musical evolution. It’s truly come as a change for the local reputation of Grill to majorly shift from technical death metal to mathematical jazz-rock with heavy elements, supported tonight by the pulsing urban jams of Motherfunk.

For our opening act, a swift and solid serving of electric band-based gangsta rap with elements of R’n’B soul and psychedelic guitar work instantly elated the youthful audience. Both a minimalistic and busy five-piece, Motherfunk exhibited robotic tightness in some parts and neared a Zappa-like climax of off-kilter dizzying jazz in the latter half of their set. Extremely nimble, soulful and precise verbal rhythms from rapper and singer pair Kiyanosh Sahebi and Thandiwe Gudu proved irresistible to the crowd and simultaneously ignited the dance floor, above the constantly intricate musical immediacy. Echoing from the hardwood and high walls of the Baroque, the rumbling bass-breaks of Mark Sahin melted through the building as they were complimented by the delicate keys and mean funk. In lighter moments, spidery jazz grooves relieved any heaviness in the air, as in a predominantly vocal cover of Kendrick Lamar’s ‘Institutionalized’, confidently executed with style. A tasteful blend of disco and reggae elements further drove home the supreme objective of groove. The endless hours of rehearsal that had obviously been put in very much showed, and we bounced along to vibes echoing flavours of The Fugees, Hiatus Kaiyote and Thundercat.

Later arriving ready to slay, and boasting some colourful holidaying shirts, Kalon, Jarrah, Andres and Robert took to the stage as the razor-sharp sons of prog, incredibly psyched to be debuting their new material. This was a totally revamped setlist away from tracks such as ‘Deformed’ and ‘Alien Abortion’ from their 2015 self-titled EP. The evolved version of Grill was not here tonight to snap necks but to ignite brains with some immense polyrhythmic prog instead. All wielding their chosen instruments as a natural appendage, these young musicians began their set with delicacy before cranking their chops to carve up some insanely precise Latin rhythms and busy, cascading funk attack. If one was studying closely enough, many metal elements could still be identified, either in the abrupt groove-pockets spinning off finger-blurs of lead soloing, or Kalon Captain’s wide-reaching drum fill patterns.

Also having a new logo, Grill were playing all new songs such as ‘Heart of the City’, ‘Circadian Patterns’ and the epic, final ‘Voyager’, with singer/bassist Robert Mouat easily reaching incredible notes of high A! In deliberate brief moments free from formal structure, the passionate dual guitar work of Jarrah Dhyan and Andres Rodriguez proved endlessly hypnotic. As improvisation fell back into unhinged and lurching technicalities, the audience of the Baroque responded very well to these regular artistic changes and offered tiresome encouragement to the bold quartet. Frequent thrills could be found in Mouat’s incredible pipes as he broke out of the vocal stratosphere, including practically operatic flair through the end of ‘Voyager’. Grill were certainly a lot to take in; a keen collective arsenal armed with genre-bending ability.

For the development of progressive culture, both acts flexed their reputations as young leaders of future musical breeds and gave Katoomba a night to remember. Wherever the following years may see these groups venture is going to be a thrill to watch.