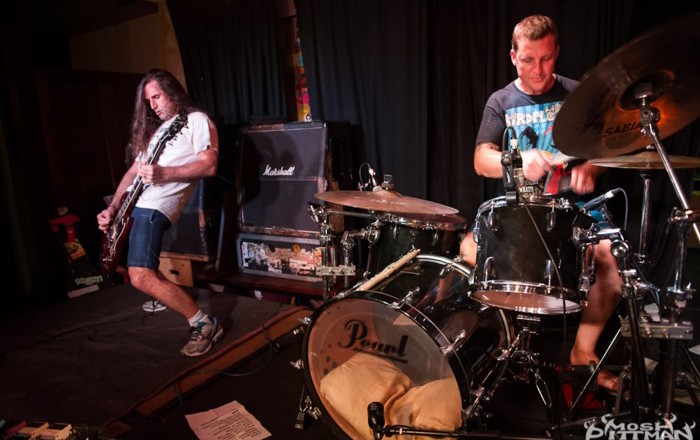 The Astor Theatre was the venue, the Hard Ons the band of interest and despite a festival set up of two stages for this night of music billed as Astor Rocks this reviewer was interested in only the Sydney punk legends.

It had been 22 years since I last saw the iconic band, having last experienced them on an ambitious but much enjoyed support slot for none other than international superstars Red Hot Chilli Peppers on their Australian tour way back in 1992. I was 19 years old.

Apologies also to Brant Bjork, as he too was on the wide ranging genre of a bill along with US veterans, The Meat Puppets, but as with all festivals on multiple stages, some bands miss out and as already stated, today, was a day I would not miss the Hard Ons.

I was met immediately by the Hard Ons merch stand and the band’s bass player, Ray Ahn, mastermind behind their incredible art work. An all-round great guy, after speaking to Ahn it was clear he’d enjoyed his time back in the west with tales of the already infamous Margaret River Football Club gig, just a few days prior, already forming legend status in these parts.

Anyway, I regress. The Astor Lounge itself is a small dungeon-like setting with a four to five tier seating area and a floor space for 50-60 persons. A capacity of around 200 if sardined. Scene set.

Perth bands, Axegirl and FAIM garnered my attention pre-Hard Ons. Axegirl is a three piece pop-punk band fronted by English lass, Addison Axe. Jebediah bass player Vanessa Thornton and drummer Brett Mitchell round off the trio. To be honest, these guys surprised and appear to be a tight unit these days and a decent crowd on hand witnessed an equally impressive set, highlighted by their single, ‘Give Me Your Tee Shirt’.

Next up were FAIM, the five piece Perth punk band mash up that sits uncomfortably between a Jello Biafra project, latter day Cramps and a Hey Hey It’s Saturday ‘Red Faces’ skit. A talented, crazy, bizarre, fucked up band and that’s just the way they like it. Having just returned home from a brief national tour in support of their latest single, ‘Means to Their Ends’, the band gathered on stage, an unruly, uncouth lot if ever there was one. With vocalist Noah Skape draped in a torn tight fitting dress, the FAIM delivered another diatribe of melodic, frenetic punk. Weird and wonderful, you haven’t lived if you haven’t witnessed a FAIM performance and despite the smaller gathering and a few bass tech issues, the FAIM delivered.

By the time the Hard Ons took the stage the Astor Lounge was capacity, a fitting tribute to a band celebrating their 30th year in the industry. I won’t lie, seeing Keish De Silva fronting the band as a vocalist only and not animalistically crashing the drums threw me for a while. Suffice to say as the set unfolded that pop punk vocal blended seamlessly into the multitude of tracks being unleashed and all was forgiven. Ahn slugged away on his bass as he has for the last three decades including some impressive over-the-head and behind-the-back contortionist moves and Peter Black aka ‘Blackie’ with his long locks still attached attacked his strings with gusto.

With Murray Ruse, the ‘new’ drummer, leading the band into ‘Raining’, the veterans set sail into an hour long set of classics. Three songs into the set and all bar Keish were shirtless, he swaying side to side between schizophrenic head jerking and improv body jolts. An awkward front man but engaging nonetheless. The endless classics rolled ‘On an On’ as the song goes. ‘Dull’, ‘There was a Time’, ‘Missing You, Missing Me’, ‘Don’t Want to See You Cry’ delivered with ferocity and in rapid succession amongst short songs and blitzkreig instrumentals, it was impossible to accumulate a set list. ‘She’s a Dish’, the single from the 1992 EP,‘Dateless Dudes Club’ provided the highlight with Blackie’s elongated solo a punkalicious treat.

The crowd yelled out songs between performance and the Hard Ons did their best to accommodate, including a rendition of the classic, ‘The Girl in the Sweater’. All too quickly the set concluded as the hour passed in what was hopefully not the last time we see The Hard Ons out west.

James is a regular contributor from Perth.