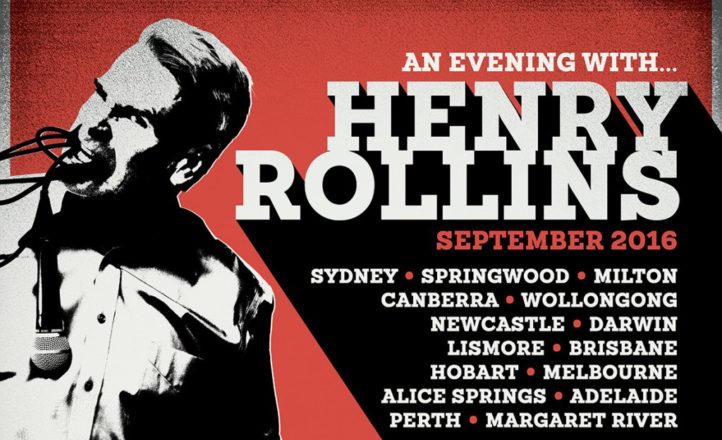 When the news broke that Henry Rollins would be opening the Australian leg of his latest tour at the sparkling new Hub in Springwood, surprise and excitement followed. By the time the local grapevine had finished echoing the likes of “Rollins is coming here!” “Why is he coming here?” and “Yay!”, disappointment swiftly followed when the 436-seat theatre sold out in less than ten minutes. The fortunate few assembled this evening, with most looking a far cry from the sweaty crowds who would fill other types of rooms to hear Rollins bellow out his anger with his musical projects; indeed many of them had probably never done that. It mattered not – the cult of Rollins is far bigger than just music now, perhaps as large as the man’s own vast field of interests.

Without delay, Rollins soon appeared, dressed down in black, and began to talk. It was a little after 8.15. When we left the theatre the time was shy of 10.30. Rollins had barely paused. Beginning with an apology about his running off at the mouth and using irony, the ride began – politics, the apparent inability to develop normal human relationships that has formed his deep love of music – “I love music more than I love people” – Bowie, the environment (“You all know, because you are all smart, that climate change is real!”), strange LA denizens with a soft spot for terrible films he’s been in, being in terrible films because he gets offered them and hates being idle. His style is witty and fast, peppered with humour, sagacious social and human observations, and touching pathos when he relates the tale of his time hanging out with Johnny Ramone right before his death, of hearing about Bowie’s passing and realising that sorrow might stop him from performing that night. The story of the Frankenstein’s monster-like Juggalo gearhead who bursts into tears in Rollins’ favourite coffee place when he realises the tattooed orator was in his dead wife’s favourite movie is related with a mixture of ridicule, emotion and wide-eyed awe; time and again he turns the lens back on himself with a deprecating throwaway line, and while all he says has a dark undercurrent it also, like his music did, carries a message of hope and self-empowerment.

It isn’t hard to see how almost 500 people can hang on every word of his near-two hour routine. It’s not difficult to understand how his following has grown so much, and remained so loyal for so long. He is a unique voice with a unique perspective and he continues to share it with the world, not for any political or religious cause, not especially for money – although no doubt it makes him some – but because, to use in his own words, it’s just part of the stuff that he does.