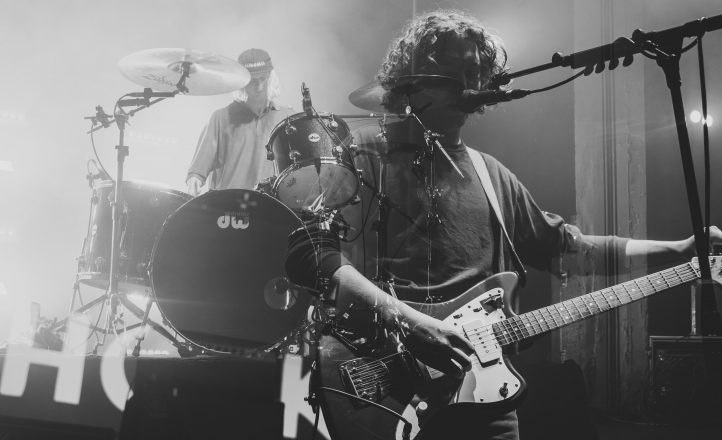 Early doors were no turn off for the largely under age crowd, who lined Enmore Road in an effort to get the best spot in the pit for their favourite duo. I had been keen to catch Wollongong’s Totty for a while now, and they were well worth the wait. The three piece brought the noise and fed off the enthusiasm emanating from the audience. They have great stage chemistry. Momentum was built, much fun was had, and the pit was frothing for more from the indie-punk rockers.

Melbourne’s Tiny Little Houses were a different story. They began their set without greeting the crowd, and seemed awkward and disconnected. Maybe suffering from nerves on the famous Enmore stage? They eventually did say g’day a couple of songs in, and got more into it after they warmed up a little, but there was long pauses during their set and a lot of the energy built up by Totty was lost. Not that the majority of punters seemed to care; jumping around and swaying the whole time to the pop rock tunes.

The lights went out, Cake’s ‘The Distance’ was cranked, and there were squeals and cheers galore as Windang’s wunderkinds entered the stage. Everyone in the seated section rose up.

“Fucking hell, Sydney. This is insane!” exclaimed drummer Billy, and it was. The crowd’s combined voice was deafening; frontman Zach didn’t really have to sing at all. Even slow jam ‘Danny’ couldn’t calm the masses down.

Hockey Dad just get better and better live. Tonight they were tight but not over rehearsed, in tune with their adoring crowd, and played a great mix of old and new material. Excitement really ramped up for ‘I Wanna Be Everybody’, there wasn’t a still being in the whole venue, and I thought the floor was about to give way. The Hockey Dad banner then dropped and revealed a ‘Join the Club’ one as they launched into the tour’s namesake track. Never mind the floor giving way, was the roof about to lift off? “It’s not too haaaaard, to join the cluuuuub” we all screamed, wearing giant grins.
I’ve never met a HD cover I didn’t like, and the boys absolutely nailed Supergrass’ ‘Alright’. A great choice for their fanbase – ‘we are young’ sure sums them up (for the most part).

Just when I thought the frenzy had peaked, t-shirt guns were bought out on stage (one being operated by a member of Skegss, to add to the fanboy freak out). Upstairs, there was a bit of a scramble, but no actual fights for the tees. Not sure if it was the same in the mosh.

‘Homely Feeling’ was smashed out before the boys left the stage pre-encore. We were treated to three additional songs and confetti cannons for the final track. One last burst of excitement and shrieking prior to departure. If we weren’t members before the show, we sure as heck were now. Join the club too. Hockey Dad forever.