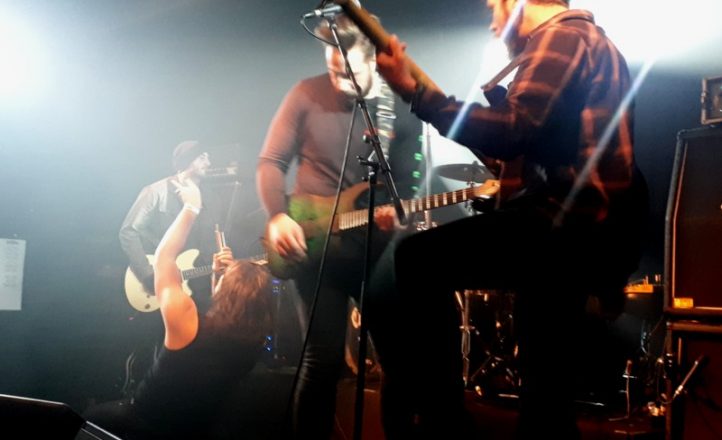 Perfectly timed for the winding back of restrictions that would have otherwise meant everyone had to sit down all night, the first leg of Home Brewed hit Sydney’s Crow Bar tonight. Rockers Lillyé had to cancel at the last minute, pushing Bad Moon Born into the headliner slot, a promotion they truly deserved.

Opening act Big Red Fire Truck had the look and feel (and name) of a late 80s pub rock band. Just straight up feel-good hard rocking fun, these guys delivered good tunes and good energy. Avalanche plunder the AC/DC riff catalogue mercilessly as they wade through a punchy set. But with such youthful, wide-eyed exuberance it’s easy to forgive them as wildfire guitarist Veronica Campbell regularly traipses into the crowd while pulling off some epic soloing. Plus, they rock like fuck.

If Avalanche were AC/DC, Wicked Things are Van Halen, young guns playing old school party metal like the world depends on it. Catchy hooks, huge hair, guitar/bass tapping trade offs – these dudes have it all. The singer even pulled off a complete backflip among their 80s flashback high-kicking hi-jinks and a pretty faithful cover of Panama. Good vibes.

Katoomba quartet Hibiscus Biscuit seemed strangely out of place on this bill. While there certainly wasn’t anything negative about their presentation or performance, extended jazzy psychedelic jams weren’t exactly the order of the night but if anything their almost loungey approach was a nice contrast to the high-energy bands around them.

As if to prove that very point, Screaming Eagle swooped onto the stage next. With their singer-guitarist’s no-fucks-given attitude and soulful vocals, they fired off another strong set of no-nonsense heavy rocking with a hint of melody and a Buckcherry-like flavour.

High is a new act featuring two members of The Art. Out of a need for edible nourishment I didn’t catch their set but was told by a couple of people I can trust that they are very much worth catching, even if they took twice as long as everyone else to set up, for some reason.

Leeno Dee and Phil Bowley are two of the Sydney rock scene’s long serving veterans, having worked together in various bands since the early 1990s. Latest project Dept. of Gloom sees them teaming up once more for some riotous theatrical heavy rock stomp like a cross between early Motley and the Misfits, with Leeno on vocals, a role I’ve never seen him take on before. Leather, spikes, heavy eyeliner, hard rocking flash and substance, Dept. of Gloom kicked all manner of ass and it was nice to hear the old Melody Black track Pretty Ugly get an airing too.

Finally it was time for the band that apparently everyone was there for. Elevated to the headlining slot due to Lillye’s unfortunate withdrawal, Bad Moon Born seized their opportunity, showing us all exactly why they’ve been getting so much attention lately. Like a slick combination of early KsE and A Breach of Silence’s heavier output, Bad Moon Born unleashed a storm of brisk, sharp modern metal, their towering front man delivering a solid array of growls, shrieks and some skyscraping high notes.  The guitar team added some trippy picking to a small arsenal of catchy riffs, djenty parts and heavy breakdowns, serving up a sterling cover of Aerials into the mix as well. With a heavy and inventive style and plenty of energy, Bad Moon Born really are something to watch and brought the night to a close in a fashion that would have been hard to top. This was a solid evening of local rock talent and there needs to be more of it.